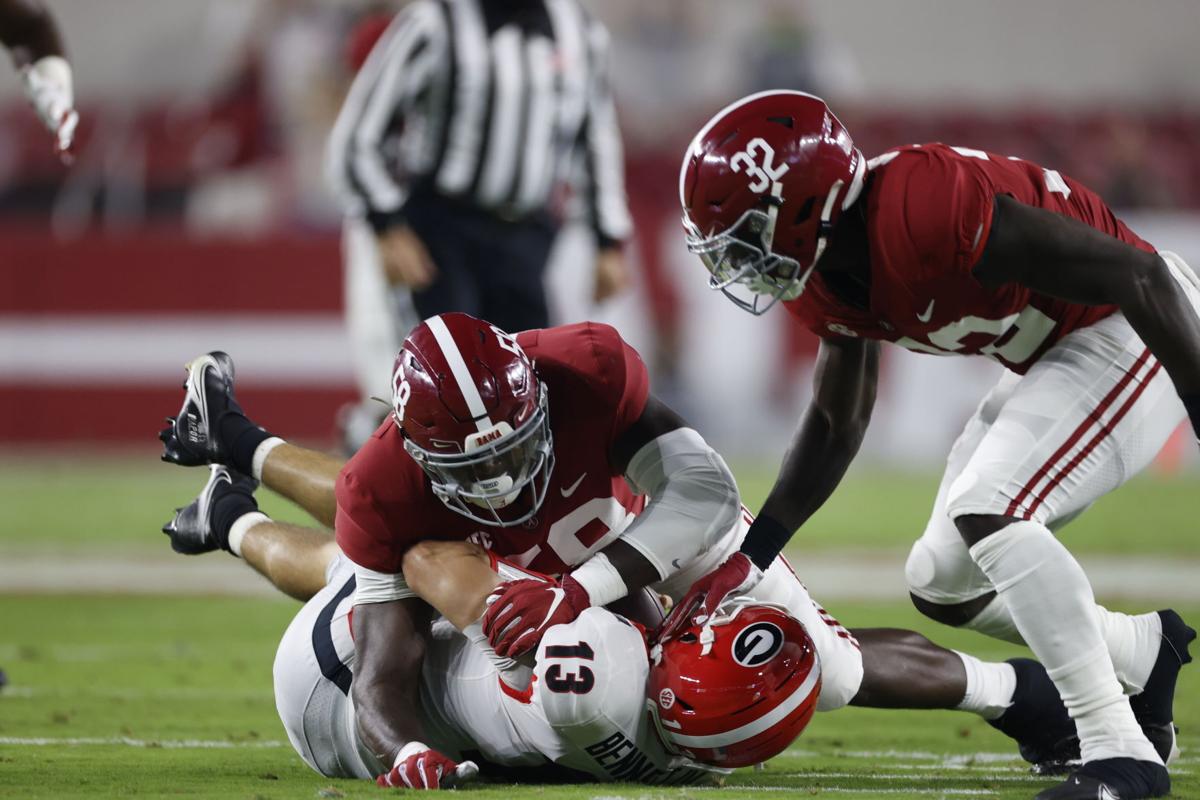 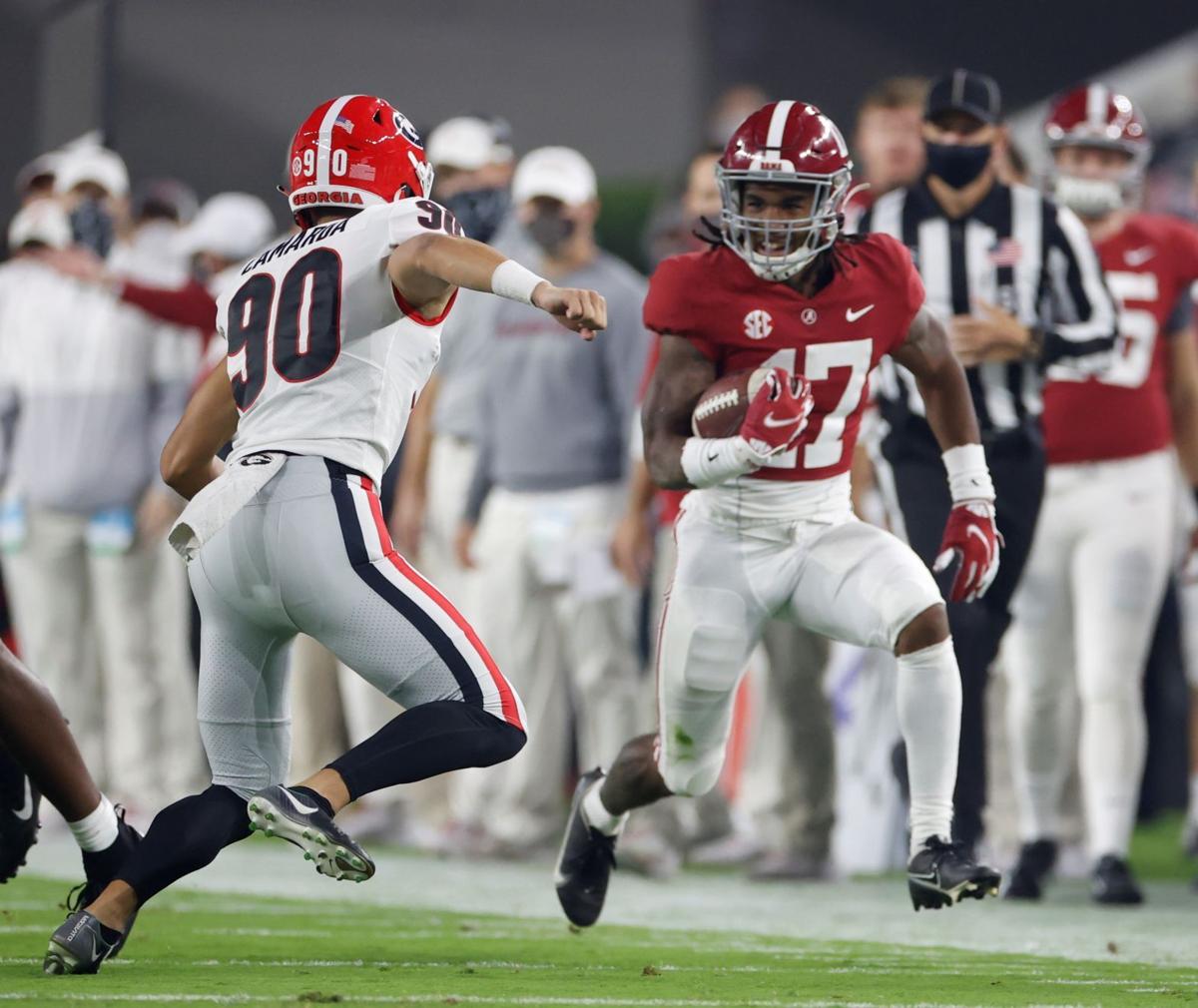 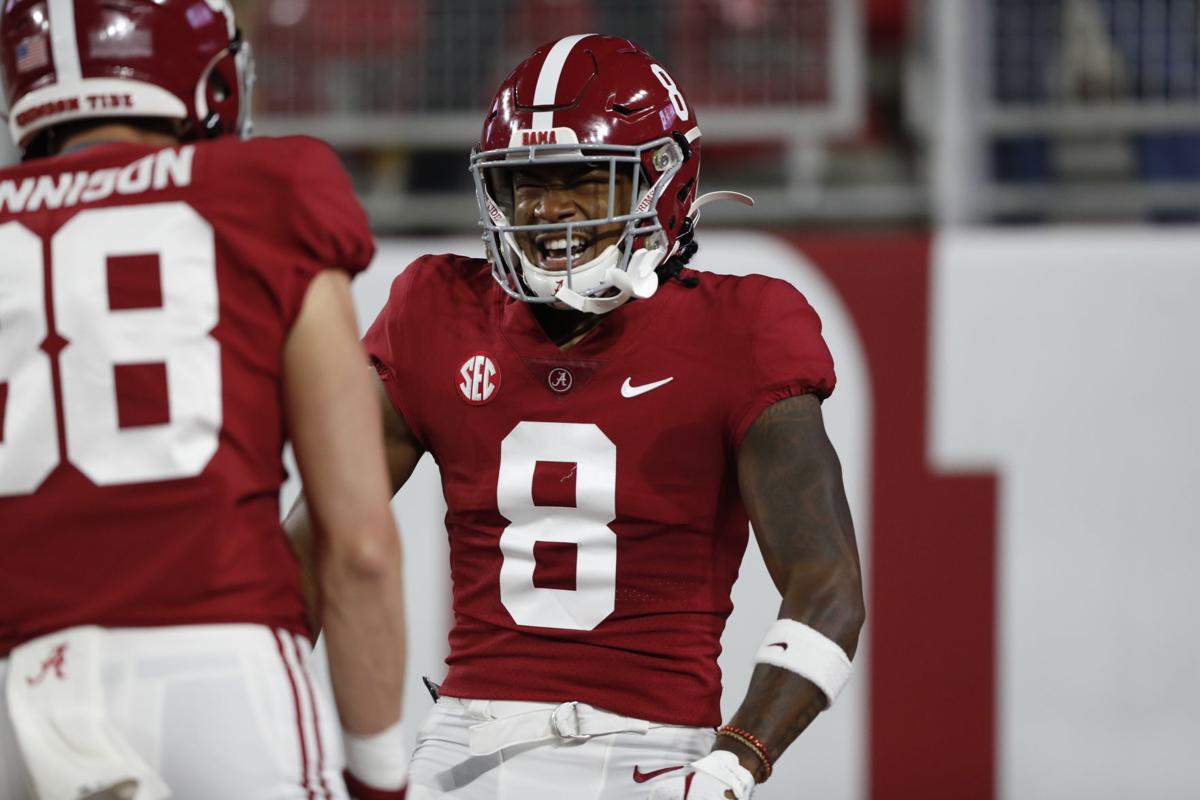 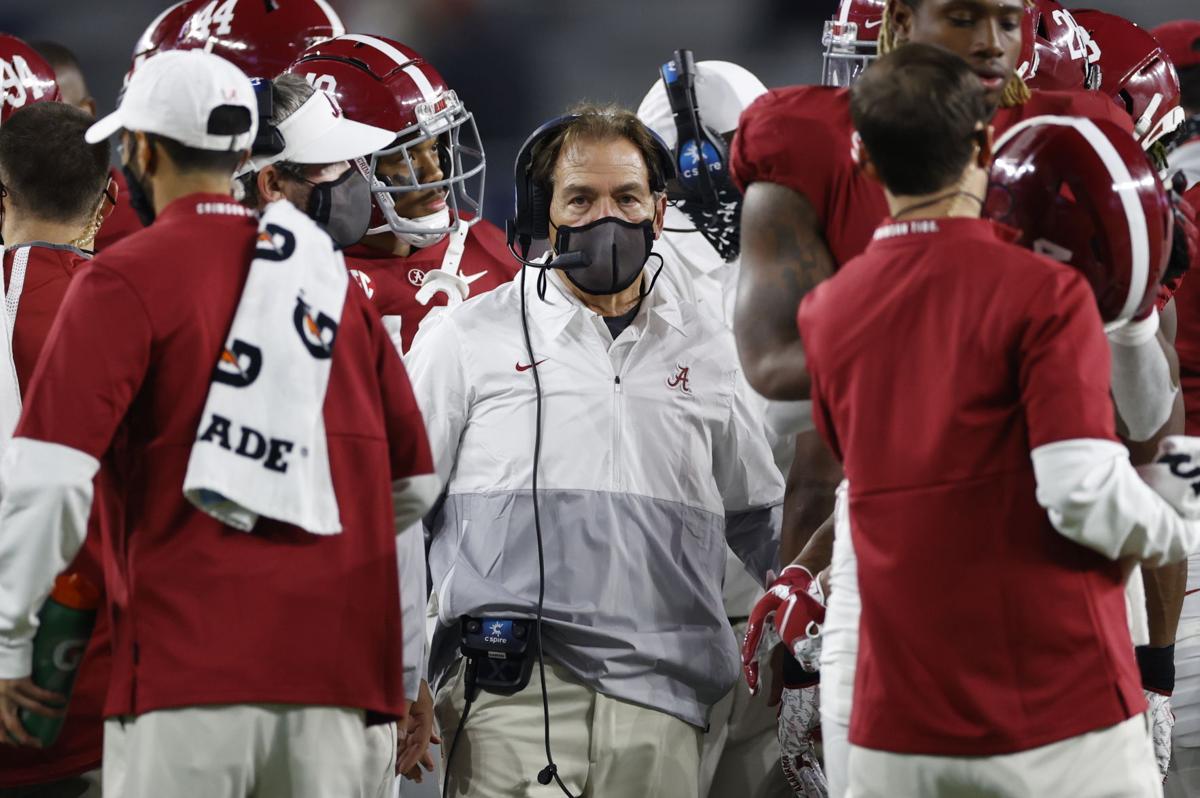 Alabama coach Nick Saban was on the sideline Saturday after a coronavirus scare. [ALABAMA ATHLETICS]

Alabama coach Nick Saban was on the sideline Saturday after a coronavirus scare. [ALABAMA ATHLETICS]

TUSCALOOSA — A positive COVID-19 test couldn't keep Nick Saban from the sideline, and Georgia's heralded defense had scant hope of keeping Alabama's playmakers out of the end zone.

Jones passed for 417 yards and four touchdowns and the Crimson Tide picked apart No. 3 Georgia's heralded defense in the second half of a 41-24 victory Saturday night. It ended up being a decisive 'Bama victory in a collision of the Southeastern Conference’s last remaining unbeaten teams.

The Crimson Tide (4-0), with Saban stalking the sideline after all, rallied with three touchdowns in a 10-minute span starting late in the third quarter.

The nation's top scoring offense ultimately got the emphatic upper hand in a battle with the Bulldogs (3-1) and one of the nation's best defenses.

“This was an obvious great win against a very, very good football team,” said Saban, who was cleared early in the day after a false COVID positiv e. "I was very proud of the way our guys fought in the game.

“I sort of knew it was going to be a 15-round fight and we wouldn’t be winning until the late rounds.”

Georgia had no answer for Jones and star receivers Jaylen Waddle and DeVonta Smith, especially with Alabama's own beleaguered defense grabbing two second-half interceptions and three overall. Freshman Malachi Moore had one at the goal line and returned it 42 yards.

Smith caught 11 passes for 167 yards and two touchdowns, including one in the fourth quarter that effectively put it out of reach.

Waddle caught a 90-yard touchdown pass and gained 161 yards on six catches. Jones completed 24 of 32 passes and was strong after an interception on the opening play.

Then there was some old-school ground and pound too. Najee Harris gained 152 yards on 31 carries carries with a touchdown during that game-clinching span. He did it against the nation's top run defense, which came in allowing 38 rushing yards and 12.3 points per game.

Stetson Bennett completed 18 of 40 passes for 269 yards and two touchdowns, including an 82-yarder to James Cook. But he threw three interceptions.

Bennett was angry with himself over his mistakes, especially that final interception throwing across his body, calling it “just stupid.”

“I was frustrated with myself,” the former walk-on said.

Alabama got a boost about seven hours before the game when the SEC cleared coach Saban to return to business of usual, determining a Wednesday COVID test was a false positive. He tested negative Thursday, Friday and Saturday.

“That was very emotional,” he said.

“It was very crazy,” Jones said. “We were in our little quarterback meeting and he just showed up.”

A maskless Saban was yelling at a referee after an intentional grounding call in the second quarter.

The Tide has won the last six meetings with Georgia, including a 3-0 record against Saban's former defensive coordinator, Kirby Smart. The first two came in the January 2018 national championship game and the SEC championship game the following season.

This was the first one that didn't go down to the wire. Georgia's defense allowed 564 yards.

“Just frustrated we couldn’t get anything going in the second half, especially that opening drive,” Smart said. “I thought we were going to be able to run the ball and we stalled out and lost momentum after that point, especially after they hit the big long bomb to Waddle.”

The Bulldogs left hoping for a rematch in the SEC championship game, certainly a strong possibility.

“That’s what everybody was saying in the locker room,” Bennett said. “Our destiny is still controlled by us. We win out, we’ll be in the SEC championship. Everything is still ahead of us.”