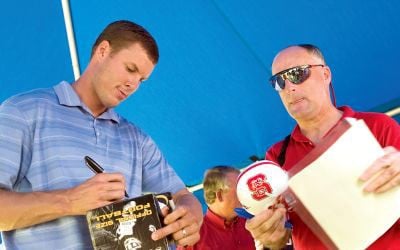 San Diego Chargers quarterback Philip Rivers signs items for Huntsville resident Will Palfrey, who says he watched Rivers play for North Carolina State in the 2003 Gator Bowl. The city of Athens honored Rivers, an Athens High graduate, by renaming a street for him. 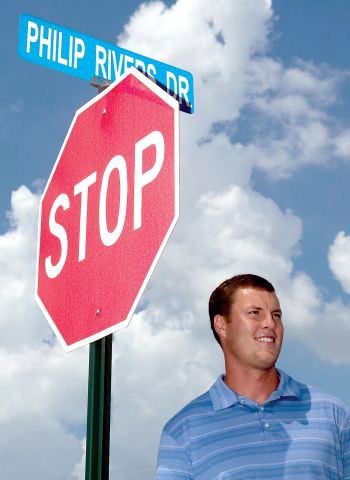 The city of Athens renamed a street next to Athens High in honor of Philip Rivers, an NFL star who was an all-state quarterback for the Golden Eagles in 1999. What used to be Victory Drive is now Philip Rivers Drive.

San Diego Chargers quarterback Philip Rivers signs items for Huntsville resident Will Palfrey, who says he watched Rivers play for North Carolina State in the 2003 Gator Bowl. The city of Athens honored Rivers, an Athens High graduate, by renaming a street for him.

The city of Athens renamed a street next to Athens High in honor of Philip Rivers, an NFL star who was an all-state quarterback for the Golden Eagles in 1999. What used to be Victory Drive is now Philip Rivers Drive.

The city of Athens has renamed a street running by Athens High for Rivers, one of its favorite sons. Now a Pro Bowl quarterback for the NFL’s San Diego Chargers, Rivers played for the Golden Eagles during 1996-99 and was an all-state player as a senior.

The high school unveiled Philip Rivers Drive, which used to be Victory Drive, at a ceremony Saturday afternoon. Rivers attended with his parents, Steve and Joan Rivers, his brother Stephen, his sister Anna and two of his four children. Several city and school officials and about 100 fans attended as well.

“I drove on that road a million times when I went to school here,” Rivers said. “To know that sign will be there forever ... that’s pretty awesome.”

Athens High head football coach Allen Creasy joked that Rivers had better be careful about how he conducts himself in the future or he’ll find out the street sign won’t be permanent.

“I don’t want to talk about taking it down,” Creasy told the crowd, before glancing at Rivers, smiling and adding: “Believe me, we will, if you don’t keep your nose clean, Philip.”

Then he added seriously: “That’s not a worry with Philip. I hope that when students see that sign and Philip’s name, they’ll say that he’s the type of person they want to be. That’s the message we want this to send.”

Returning to Athens High for a day brought back memories for Rivers, especially playing for the Golden Eagles when his father was head coach. Rivers started at quarterback as a junior and senior, but before that, he was a pretty good linebacker as a sophomore.

During Rivers’ sophomore season, Athens had a senior quarterback in Grant Lauderdale who eventually led the team to a 10-1 record. Rivers was his backup, but Creasy thought Rivers was too valuable to spend games on the bench. So, he and Steve Rivers agreed to allow Philip to try playing linebacker.

In fact, Creasy said that Rivers led Athens’ linebackers that year in interceptions, returning a couple for touchdowns.

“Philip surprised people with his toughness,” Creasy said. “He was a very good linebacker, and he would’ve been a great one if he had stayed at the position.”

Then he smiled again and joked, “For some reason, the next year Coach Rivers wanted him at quarterback. I don’t know why.”

Rivers said he was about 6-foot-4 and 175 pounds his sophomore season, but even so, he delivered at least a few hits he said made him proud.

“I remember playing a jamboree game at Athens against Bob Jones,” Rivers said. “I got a 15-yard penalty. I was a little late with my hit.

“One of the things I remember is that it happened on the other side of the field from our sideline, and my dad hollered at the official, ‘We’re fixing to hit ’em even harder than that.’ ”

As a junior, Rivers moved to safety. That season, Athens won a state playoff game at John Carroll, and Rivers said he remembers making a couple of big hits in that game.

“At the time, they seemed big,” he said, smiling. “Looking back, they probably weren’t all that big.”

He said his San Diego Chargers teammates can’t believe that he once was a feared linebacker and safety. He said they point out his speed — more precisely, his lack of it.

“They always say, ‘You played safety? With how you run?’ ” Rivers said.

Rivers has gained plenty of honors for playing quarterback. As a senior at North Carolina State in 2003, he finished seventh in Heisman Trophy voting. He was a first-round pick in the NFL draft, and after the 2006 season — his first as a starter — he was selected for the Pro Bowl.

In two years as a starter, he has compiled a 25-7 record and took his team to the AFC Championship Game last season.

But he said he owes at least a small portion of all that to getting to play defense for Athens High.

“I thought of myself as a football player, not just a quarterback, but when they mentioned playing linebacker, I was a little unsure,” he said. “There were a lot of unknowns.

“But it did me a lot of good. It made me a lot tougher, and I grew up a lot. Also, playing linebacker and then safety helped me see the game from the defensive perspective, which helped me at quarterback.”

Before setting records at North Carolina State and winning Pro Bowl honors while with the San Diego Chargers, Philip Rivers played for some solid teams at Athens High:

Should children attend classes in person or online when the new school year begins?