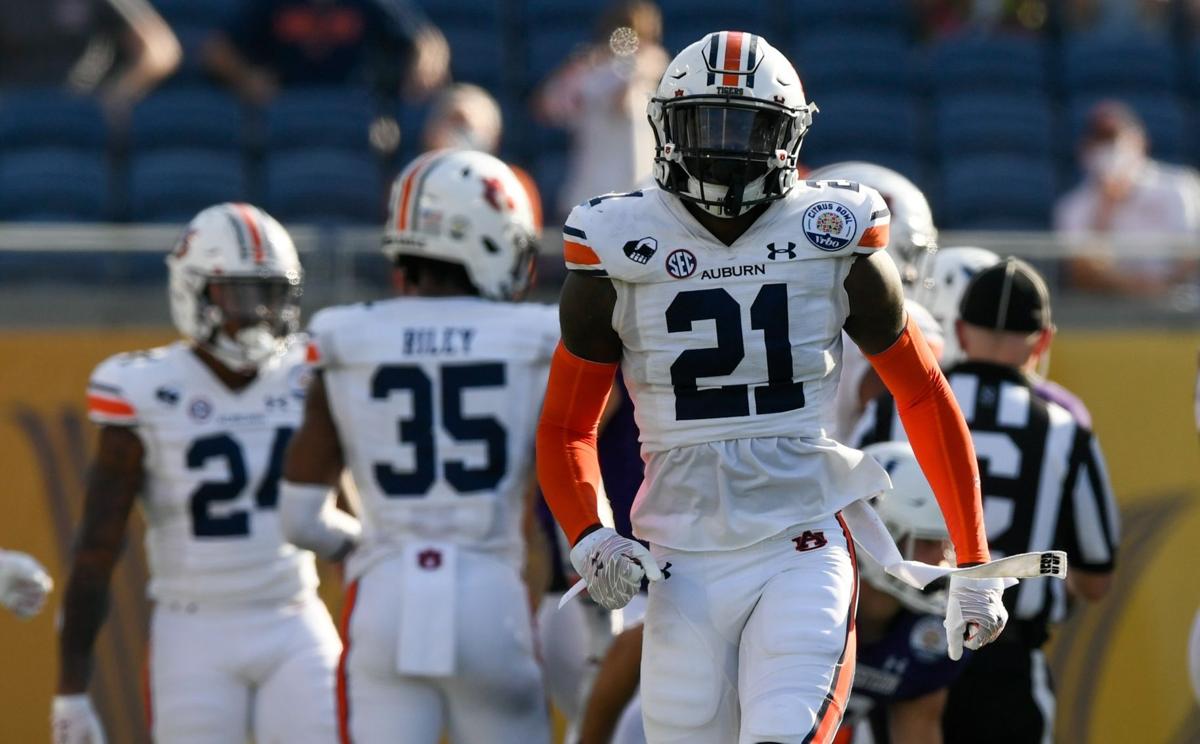 Smoke Monday is expected to be one of the leaders of Auburn's defense this year, which could bolster his NFL stock. [TODD VAN EMST/AUBURN ATHLETICS] 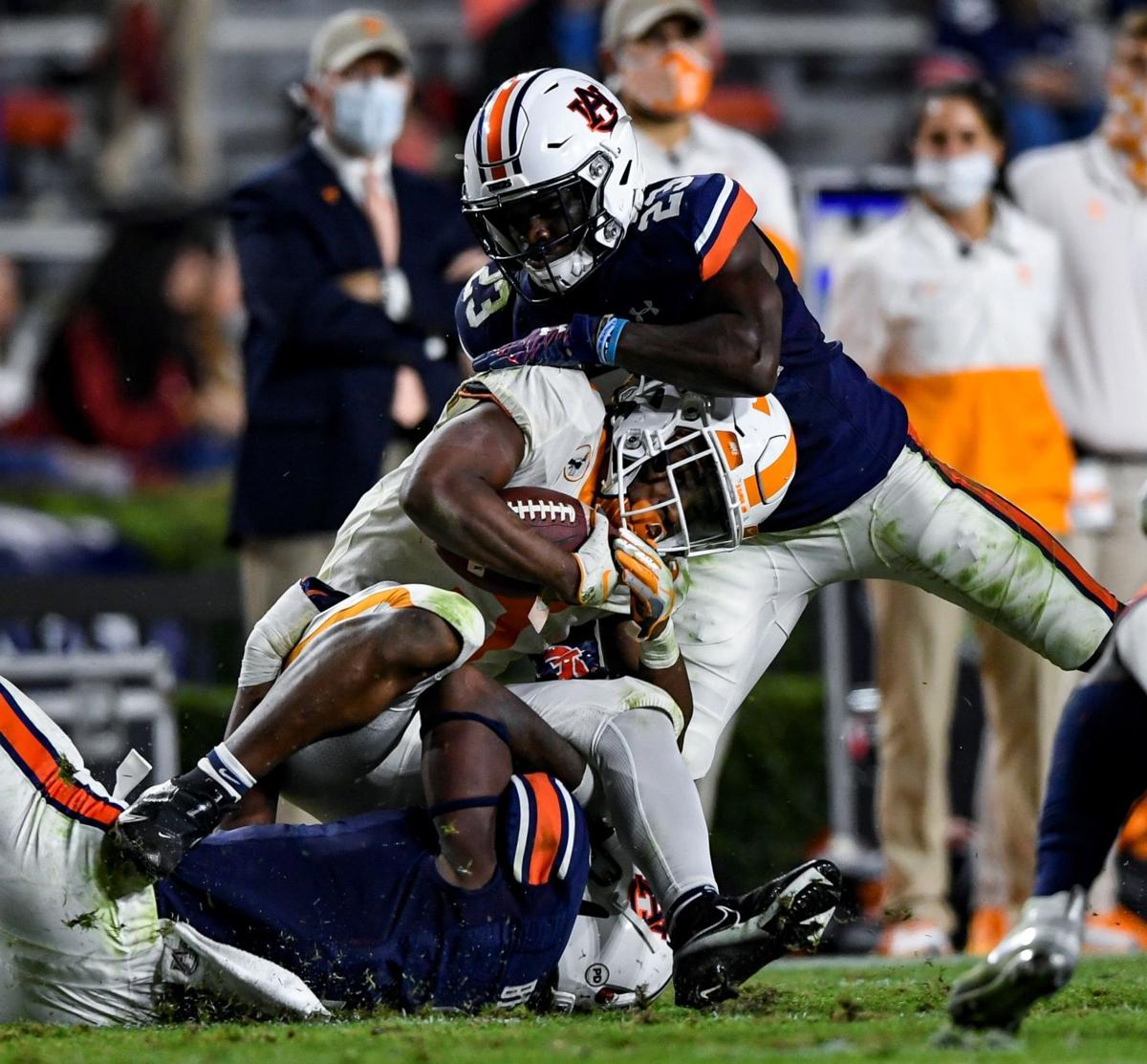 Auburn's Roger McCreary has the potential to be an early pick in next year's NFL draft. [TODD VAN EMST/AUBURN ATHLETICS]

Smoke Monday is expected to be one of the leaders of Auburn's defense this year, which could bolster his NFL stock. [TODD VAN EMST/AUBURN ATHLETICS]

Auburn's Roger McCreary has the potential to be an early pick in next year's NFL draft. [TODD VAN EMST/AUBURN ATHLETICS]

Some of their former teammates should join them before long.

Here's a breakdown of the Tigers who could hear their names called at this time next year:

• Cornerback Roger McCreary: He's Pro Football Focus' second-highest ranked cornerback in zone coverage over the past two seasons, and Nos. 1 and 3 — Virginia Tech's Caleb Farley and Alabama's Patrick Surtain II — got drafted in the first round Thursday. With another year of development, McCreary could follow in the footsteps of Carlton Davis, Jamel Dean and Noah Igbinoghene and be a Day 1 or 2 pick.

• Cornerback Dreshun Miller: The incoming transfer was the top cover corner on a West Virginia defense that led the FBS allowing fewer than 160 pass yards per game, limiting opposing quarterbacks to a completion rate of only 47.4% on passes thrown his direction.

• Safety Smoke Monday: Has struggled in coverage at times, but the former four-star recruit is 6-3, rangy and fast. He'll be one of the leaders of this year's defense, and having Derek Mason as defensive coordinator should no doubt help him.

• Linebacker Zakoby McClain: Tied for the national lead with 113 tackles last season but didn't earn All-SEC recognition. Maybe a repeat performance will get him more attention.

• Offensive lineman Tashawn Manning: Believe it or not, Manning was the highest-graded pass blocker on Auburn's offensive line last season. He was solid in the run game, too, and at 6-4 and 335 pounds, he has the size to be an NFL guard.

• Kicker Anders Carlson: Getting drafted as a kicker seems to get harder every year — only one kicker was selected in 2021 — but Carlson is coming off a season where he made 20 of 22 field goals and has a career long of 53 yards. His older brother, Daniel Carlson, was a fifth-round pick in 2018.

• Linebacker Owen Pappoe: The former five-star recruit might not be a can't-miss prospect because of his size — he's small for a linebacker at 6-1 and 226 pounds — but he's a freak athletically and has been highly productive for the Tigers in two seasons as a starter (142 tackles, six sacks, five pass breakups). He could be a versatile contributor in the right NFL defense.

• Defensive lineman Colby Wooden: Just a redshirt sophomore, but he's 6-5 and nearly 280 pounds, can play every spot along the defensive line and tied for sixth in the SEC with 9 ½ tackles for loss in his first full season last year.

• Defensive back Nehemiah Pritchett: Led the team with 10 pass breakups and allowed just 2.9 yards per target in coverage — the lowest total in SEC play since 2016, per CFB Film Room — in his first season as a starter. This year he'll move from cornerback to nickelback, a position that might be the perfect fit for his combination of speed and physicality.

• Quarterback Bo Nix: The numbers through two seasons — 58.7% completion, 6.8 yards per attempt — don't exactly scream early entrant, but history has proven that one good year is enough. Mitchell Trubisky threw for fewer than 560 yards in his first two seasons at North Carolina, then completed 68% of his passes for 3,748 yards and 30 touchdowns as a junior and became the No. 2 overall pick. Nix still has the arm talent and athleticism that made him a five-star recruit and top-ranked dual-threat quarterback coming out of high school. He just needs to translate that to the SEC. Maybe a new coaching staff can help.