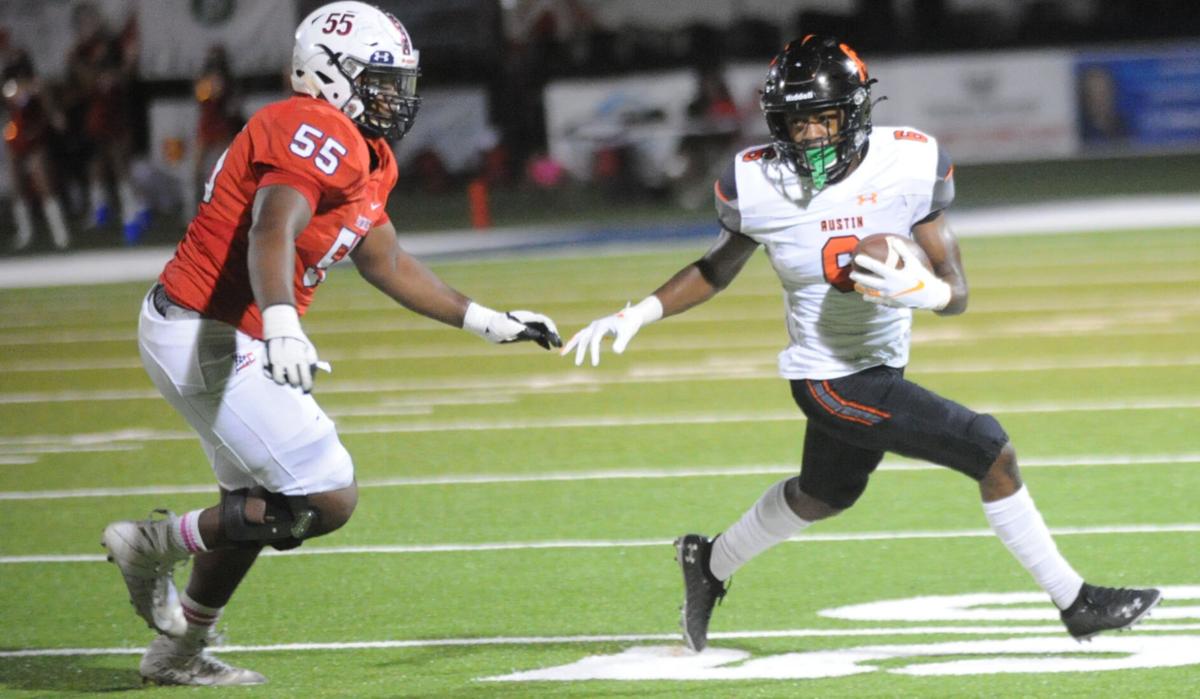 Jaden Baker avoids a tackle on an interception return early in the first half. [CALEB SUGGS/DECATUR DAILY] 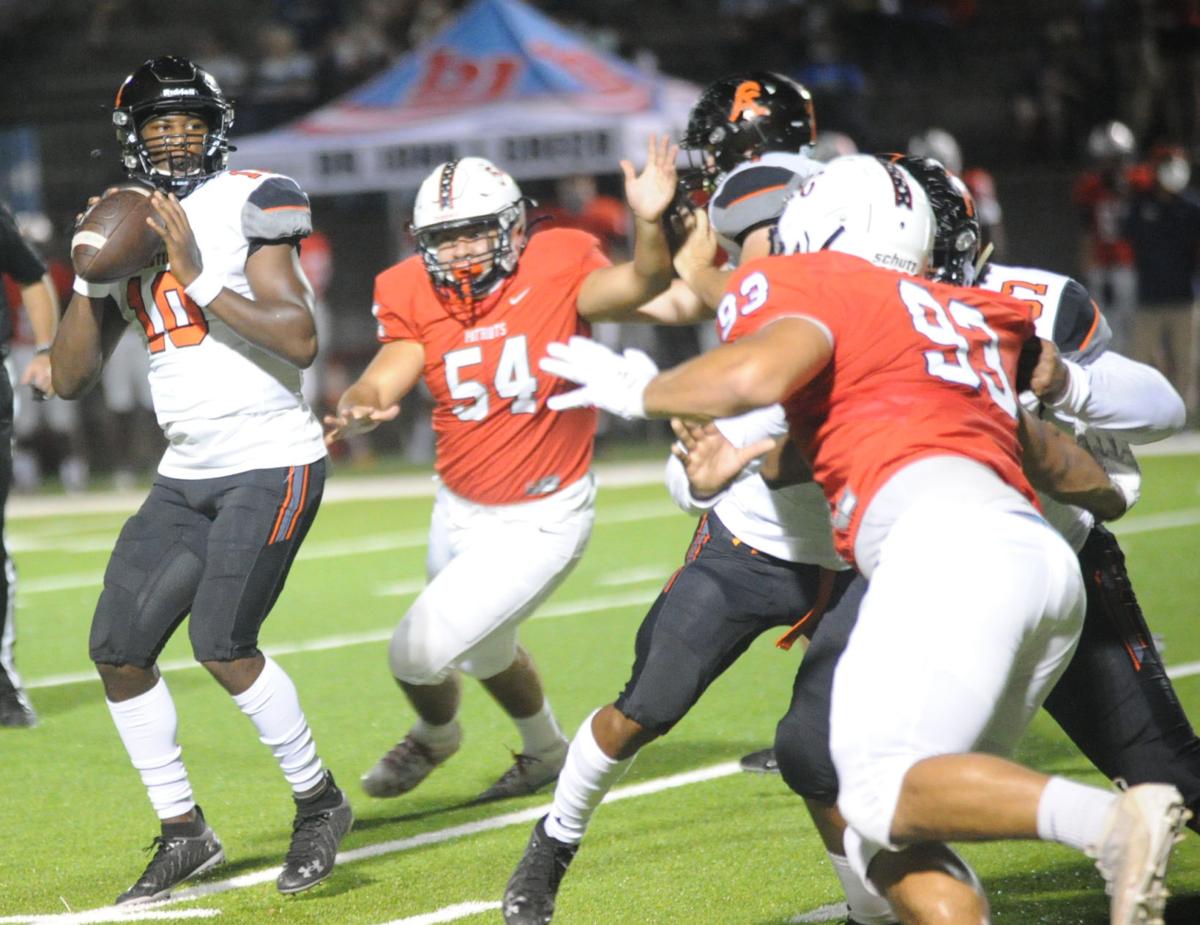 Austin quarterback Quincy Crittendon remains poised in the pocket during a 49-7 victory over Bob Jones on Friday. Austin plays Mountain Brook on Thursday in a matchup of ranked teams. [CALEB SUGGS/DECATUR DAILY] 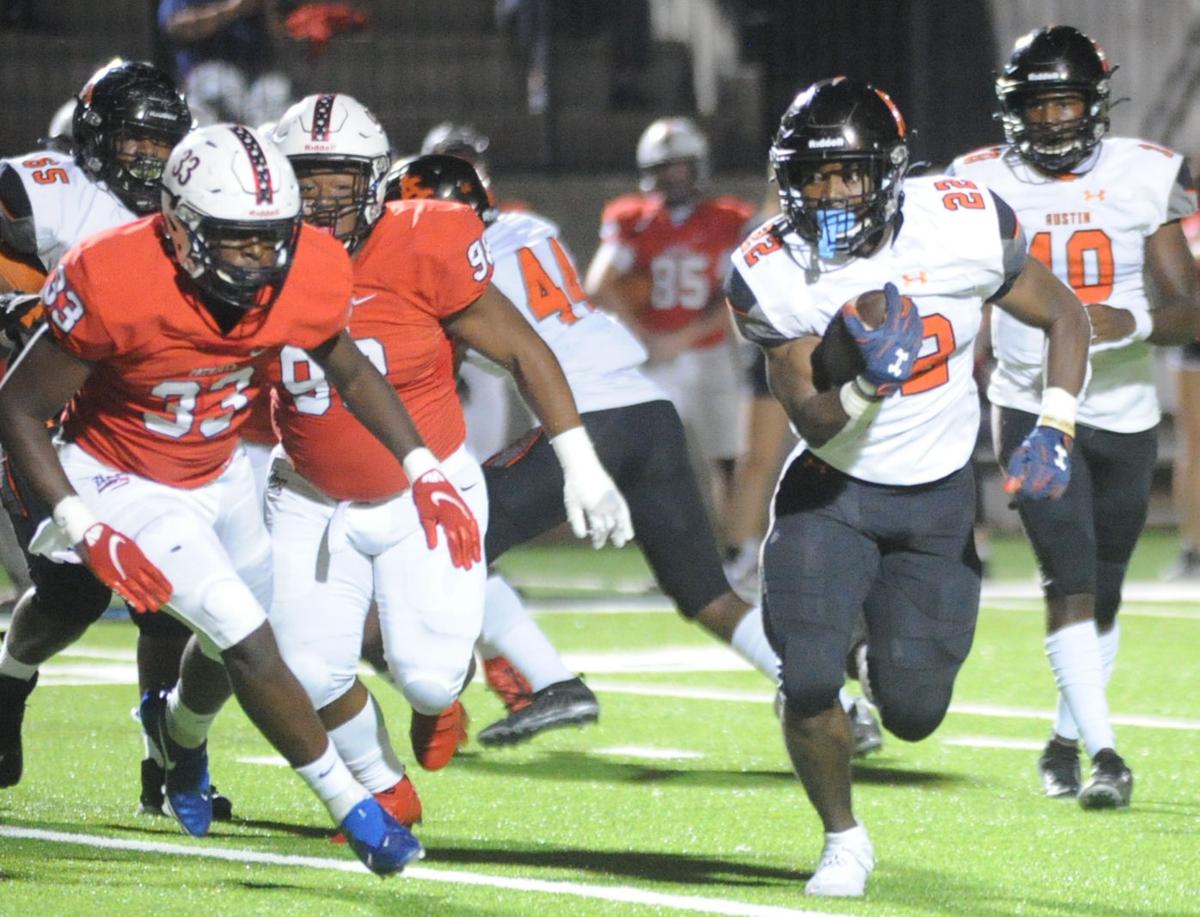 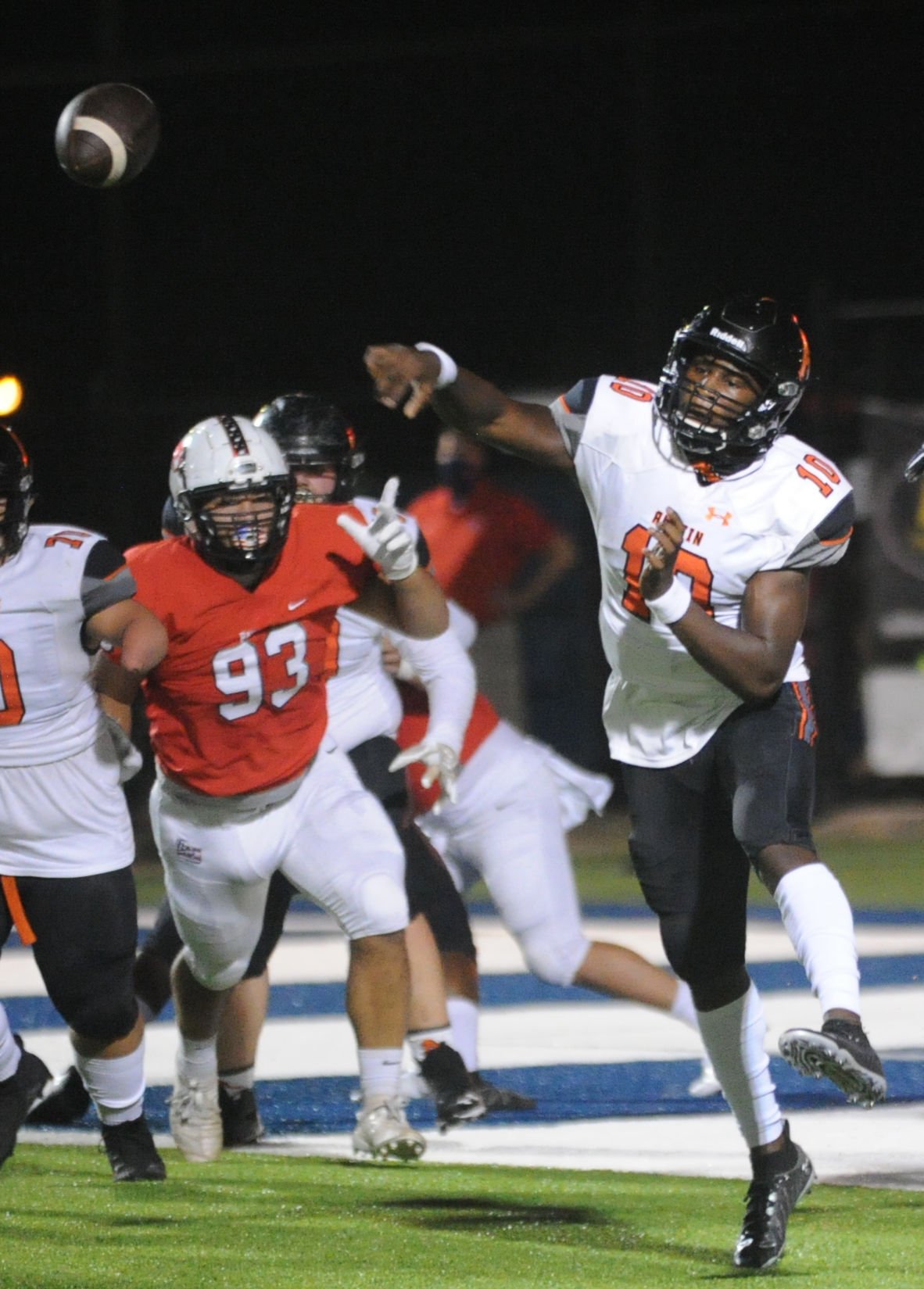 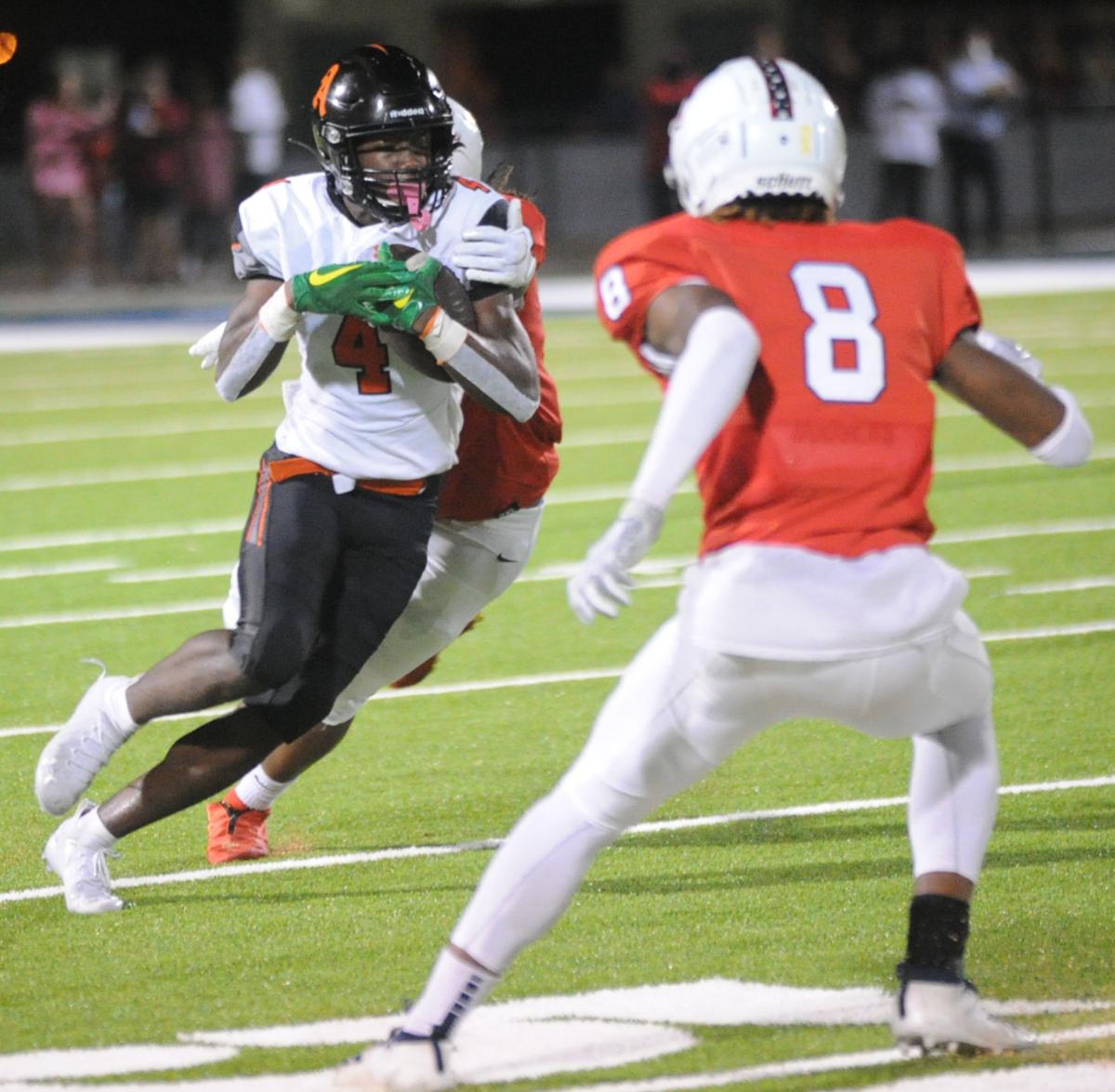 Jaden Baker avoids a tackle on an interception return early in the first half. [CALEB SUGGS/DECATUR DAILY]

Austin quarterback Quincy Crittendon remains poised in the pocket during a 49-7 victory over Bob Jones on Friday. Austin plays Mountain Brook on Thursday in a matchup of ranked teams. [CALEB SUGGS/DECATUR DAILY]

MADISON — When head coach Jeremy Perkins took over at Austin in 2010, the school had a reputation of being a basketball school.

Eleven seasons later, the Black Bears are a north Alabama football powerhouse and now, for the first time ever, 7A region champions.

“This (region championship) just proves that we have great kids that work really hard,” said Perkins. “The guys that came before, like the 2011 group and the 2015-17 group, set a standard, and these guys have fought to live up to that standard and even surpass it.”

Austin dominated Bob Jones 49-7 Friday night, improving their record to 8-1 on the season. The win also earned them their first region championship since moving up to Class 7A prior to the 2018 season. The championship is Austin’s third under Perkins in the last five seasons.

“I was very proud of how energized our guys were and how they came out and handled business,” Perkins said. “We played a very good first quarter, little sloppy in the second, but came back in the third and put the game away.”

Austin wasted no time in taking control. The Black Bears recovered a fumble on the opening kickoff and marched down the field, capping the drive with Jevon Jackson's touchdown.

Jackson added another scoring run later in the first quarter, but quarterback Quincy Crittendon was the star of the game. The senior tossed three first-half touchdowns, 60 yards to Tre Shackelford, a short toss to Braylin Boulden and 10 yards to Winston Lyle in the corner of the end zone.

Crittendon has played his entire starting career in class 7A and has had to listen to the critics say Austin wouldn’t have the same success in 7A that they did in 6A.

“This feels great,” Crittendon said. “It feels like we broke down a barrier. A lot of people doubted us, but we proved them wrong.”

But Crittendon doesn’t hold a grudge: “I gotta say thank you to those that doubted us. It was all the motivation we needed.”

By Halftime, Austin led 35-7. The Black Bears extended their lead to 49-7 in the third quarter with a Tyler Cooper touchdown run and an 85-yard pick six from Zyin Bell.

“I really want to see us compete next week because Mountain Brook is going to be a great measuring stick for us before we get in the playoffs,” Perkins said. “(7A) Region 3 is a really good region with a lot of good teams. So, I hate to call next week a tune up, but it’s a good pre-playoff game for us to play a little different team because that’s what we’re going to see in the playoffs, some different teams.”

Class 7A: Oak Mountain at Austin

Class 6A: Homewood at Athens, Hartselle at Briarwood Christian

Class 5A: Parker at East Limestone, Lawrence County at Ramsay

Class 4A: Hamilton at West Limestone

Class 3A: Saks at East Lawrence

Class 2A: Cleveland at Falkville, Tanner at Spring Garden, Hatton at Aliceville

Class 1A: Wadley at Decatur Heritage, R.A. Hubbard at Ragland