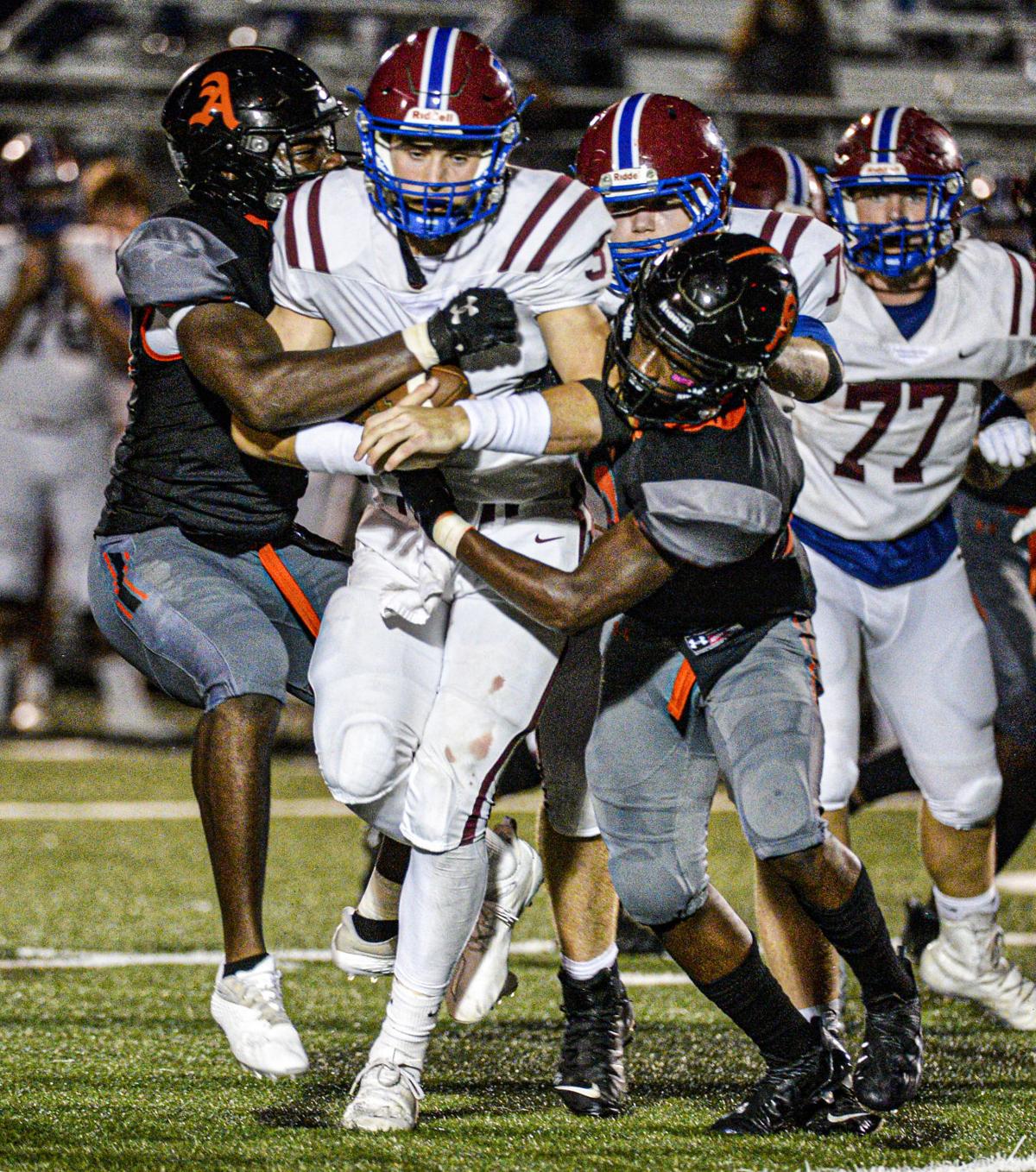 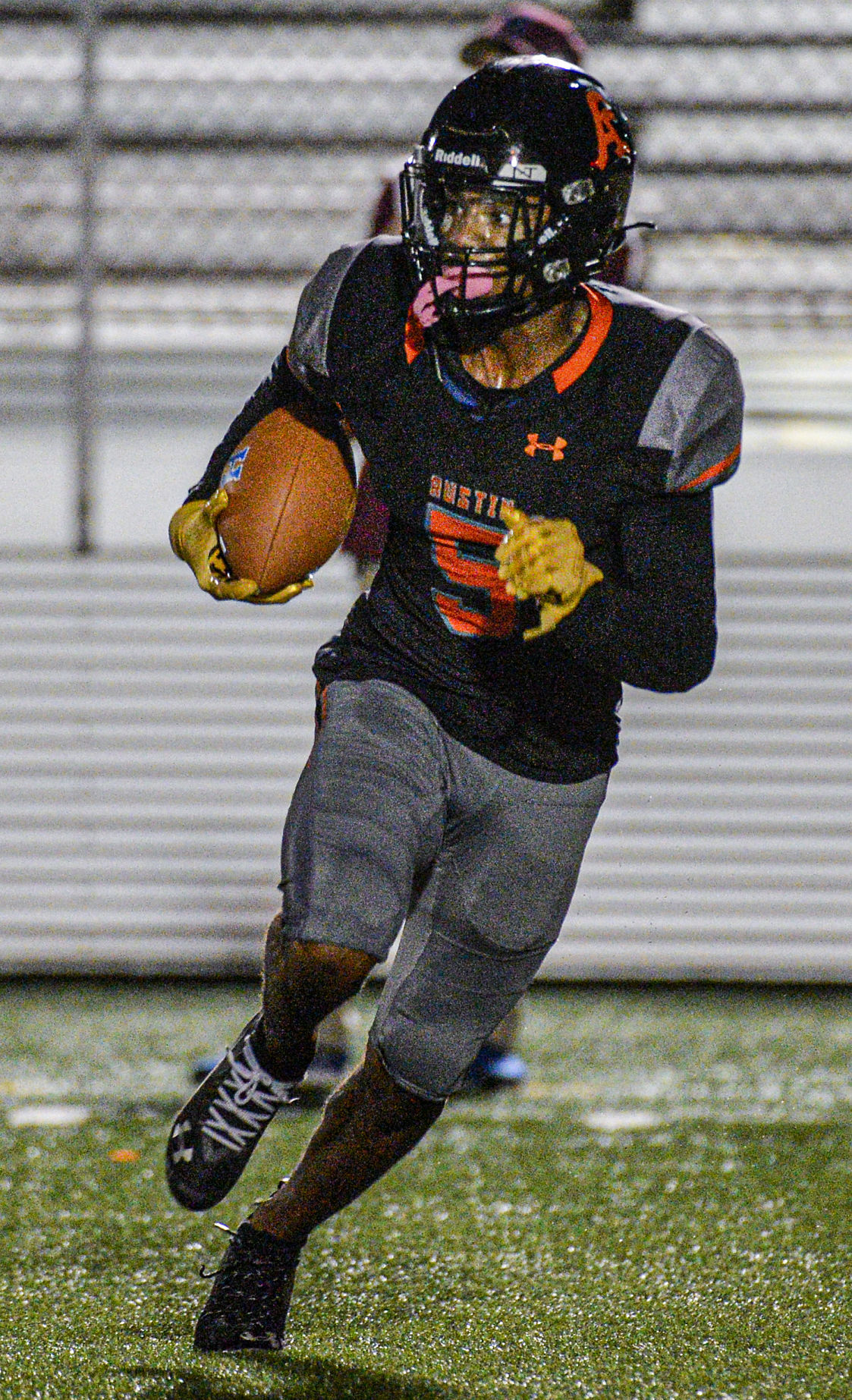 It was like old times at Austin Stadium on Friday night.

The Black Bears finally got to walk off the home field with a win this season.

“This is how it’s supposed to feel on Friday nights around here,” Cooper said. “It’s been too long between wins.”

“We’ve got a lot of young guys having to step up,” Cooper said. “They are getting better each week. Tonight it paid off.”

Cooper finished the night with 26 carries for 170 yards and two touchdowns. In the fourth quarter, he had 12 carries for 83 yards and his third touchdown.

“I’m proud of the way we played,” Austin head coach Jeremy Perkins said. “We did a lot of good things tonight. We didn’t shoot ourselves in the foot like we’ve done so many times this season. There were a lot of positives to build on going forward.”

On a night when the stands at Austin Stadium were not quite as full as they usually are, the Black Bears brought the energy to the game early in the first half and raced out to a 21-7 halftime lead.

Austin won the coin toss, elected to receive the kickoff and needed just two plays to get into the end zone. The first play was a 32-yard run by Cooper. The second play was a 28-yard touchdown pass from De’Air Young to Jones.

After Huntsville scored a touchdown to tie the game at 7-7 with 3:35 left in the first half, Jones returned the following kickoff 90 yards for a touchdown to make it 14-7.

Cooper got his first touchdown early in the second quarter on a three-yard run to finish off a seven-play, 55-yard drive to carry the 21-7 lead into halftime.

Huntsville tightened the game in the third quarter. The Panthers marched 77 yards in 12 plays on their first possession to score and make it 21-14 with 7:33 left in the quarter.

Austin’s offense then went three plays and punt on its first two possessions.

The last play of the third quarter was a game-changer. The Panthers had a third and five at the Austin 14, but a sack turned into a 20-yard loss that put Huntsville out of field goal range. A punt attempt to try and pin Austin inside the 5, didn’t work. The Black Bears took over at the 20.

Austin drove from there to the Huntsville 18. The drive ended with a 36-yard field goal by Ruben Guevara. It was Austin’s first field goal of the season. The 24-14 lead gave the Black Bears a little breathing room.

The final touchdown for Austin came at the end of a nine-play drive that covered 51 yards. All but three yards of it was from Cooper runs. He missed one play after running out of one of his shoes on an 18-yard carry on third and five.

The final score of the night came on the next play when Huntsville’s Amaree Jabarr returned the kickoff for a touchdown.

Austin’s win is a big setback for Huntsville’s chances of making the playoffs. Huntsville (2-5, 2-3) is in a logjam for the fourth spot out of Class 7A, Region 4. Austin’s chances are slim at best with four region losses. The Black Bears go to Albertville on Friday and host Bob Jones on Oct. 22 to close out region play.

“We just want to keep on winning,” Cooper said. “Winning our next two region games would be really good considering where we started.”