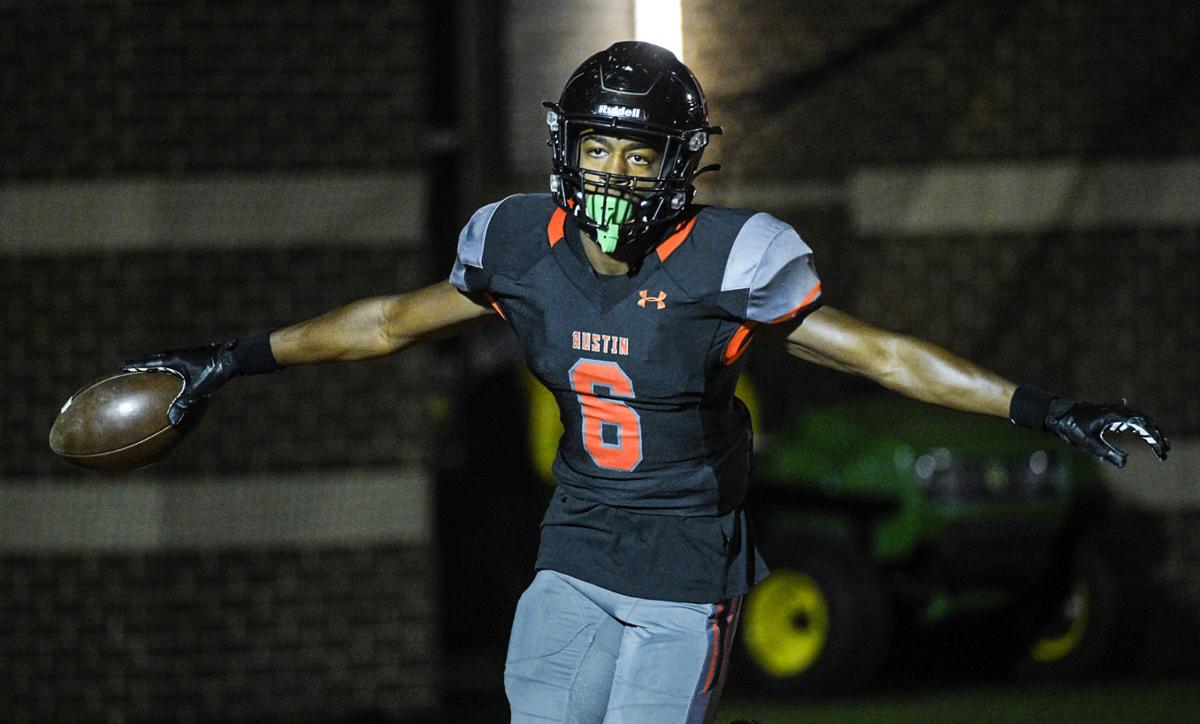 Austin's Jaden Baker scores a touchdown on an interception on the first play of the game against Albertville in Decatur on Friday. [JERONIMO NISA/DECATUR DAILY] 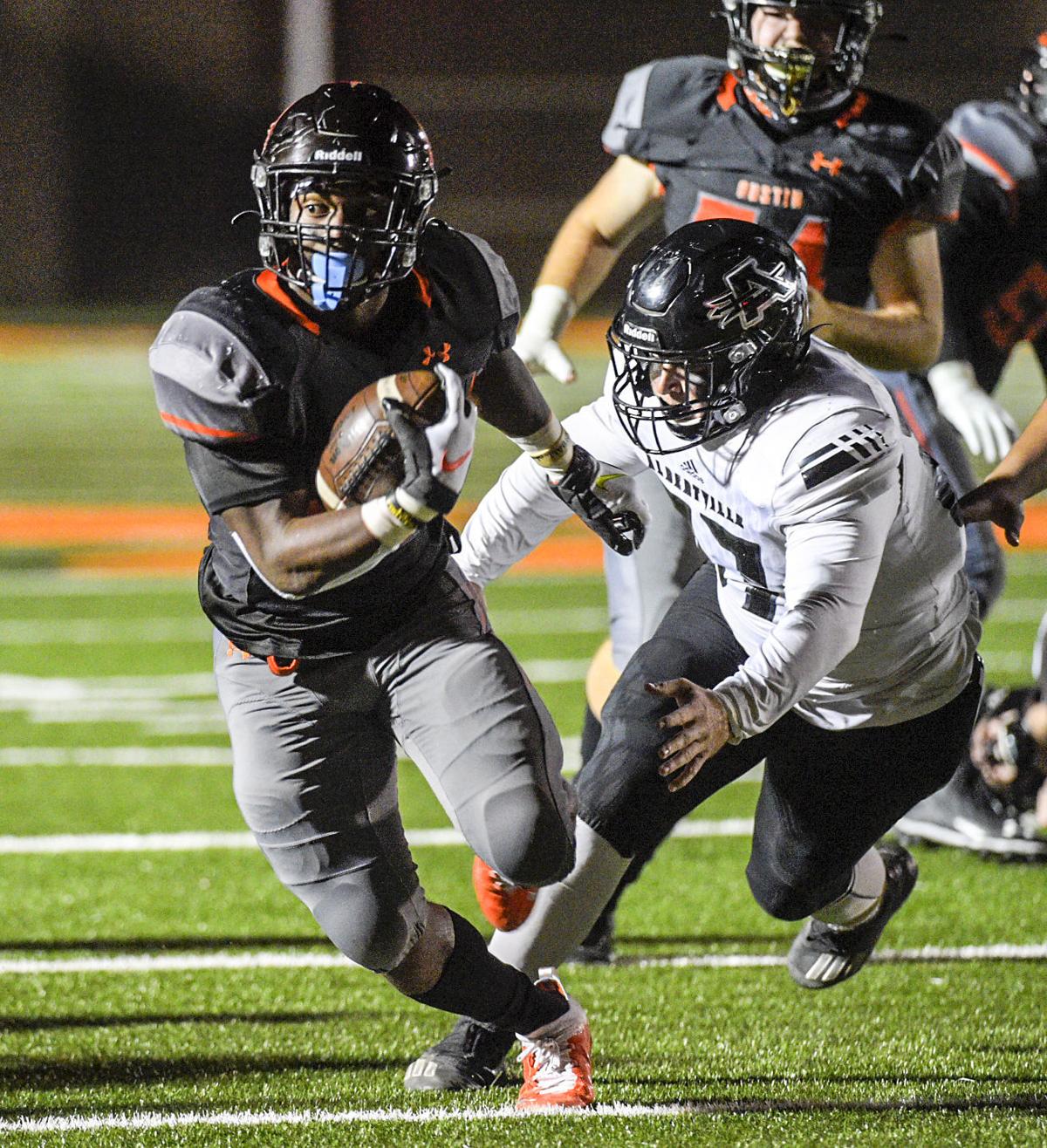 Austin's Jevon Jackson dodges Albertville defenders on his way top score a touchdown during the game in Decatur on Friday. [JERONIMO NISA/DECATUR DAILY] 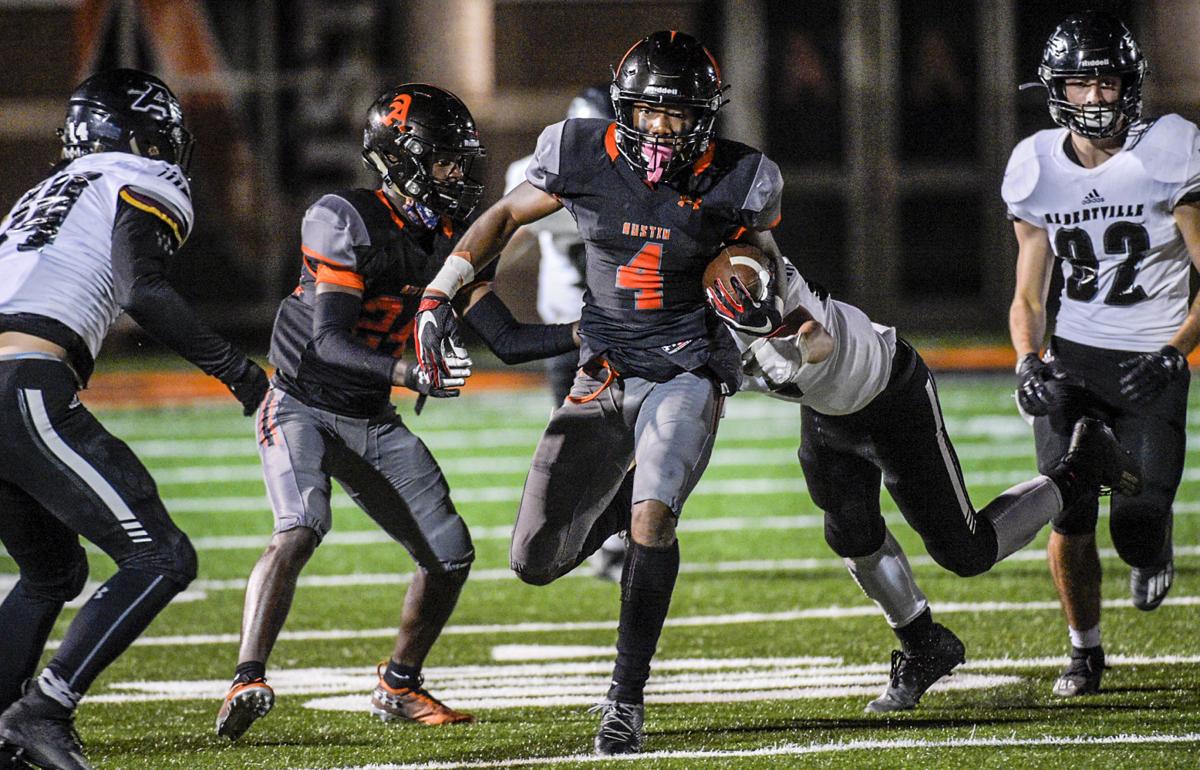 Austin's Tre Shackelford (4) avoids a tackle as he returns a punt during the game against Albertville in Decatur on Friday. [JERONIMO NISA/DECATUR DAILY]

Austin's Jaden Baker scores a touchdown on an interception on the first play of the game against Albertville in Decatur on Friday. [JERONIMO NISA/DECATUR DAILY]

Austin's Jevon Jackson dodges Albertville defenders on his way top score a touchdown during the game in Decatur on Friday. [JERONIMO NISA/DECATUR DAILY]

Austin's Tre Shackelford (4) avoids a tackle as he returns a punt during the game against Albertville in Decatur on Friday. [JERONIMO NISA/DECATUR DAILY]

The Austin football team did what it needed to do Friday night.

The James Clemens football team did what Austin wanted it to do.

The result is that next Friday the Austin Black Bears will be playing for the Class 7A, Region 4 championship.

“This is really amazing,” Austin senior receiver Tre Shackelford said. “It feels great to be in this position.”

The ingredients for a successful Friday night for Austin started with a win over Albertville. The Black Bears beat the visiting Aggies, 52-21.

The next step was for James Clemens to hand Sparkman its second region loss. The Jets did that with a 13-9 win over the Senators.

Austin can claim the region championship with a win over Bob Jones at Madison City Schools Stadium.

“We missed out on a region championship in our sophomore season,” Austin senior nose guard Jalik Malone said. “We felt like we should have won it that year. Now we get another chance in our senior year. That’s what we want to do.”

The No. 1 spoil of being region champion is getting to host a first-round game in the state playoffs that begin on Nov. 5-6. The Region 4 champion would be paired against the Region 3 fourth-place team.

The current Region 3 standings have Hoover and Thompson playing next Friday to decide first and second. The fight over third and fourth will be decided next Friday between Hewitt-Trussville and Oak Mountain.

“This is a great opportunity for our players. They deserve it,” Austin head coach Jeremy Perkins said. “I expect we’ll have a great week of practice to get ready for Bob Jones.”

The win over Albertville (2-6, 1-5) got off to a great start for Austin. It took the Austin defense eight seconds to score a touchdown. Senior defensive back Jaden Baker intercepted a pass and turned it into a pick-six and a 7-0 lead.

The score didn’t seem to rattle Albertville quarterback Ben Allen. He replied by marching his team 64 yards in 13 plays for a tying touchdown. He scrambled around for six pass completions and scored on a two-yard run.

Austin matched that long drive with a one-play scoring drive. Quarterback Quincy Crittendon hit Shackelford with a quick throw and he raced 58 yard for the touchdown.

Albertville answered with a nine-play, 78-yard scoring drive. Allen connected with James Moss on a 48-yard pass play to tie the game at 14-14.

The visiting Aggies then recovered an onside kick at the Austin 38. Nine plays later they were at the Austin 12 threatening to take the lead, but Austin linebacker Zmari Bell intercepted a pass and returned it to the 50.

The Black Bears then used a three-play drive to take the lead for good. Jevon Jackson scored on a 22-yard run.

Austin’s defense then changed its pass coverage from a zone to man-to-man. That freed up two linebackers to add to the pass rush. That pretty much hemmed in Allen for the rest of the night. Albertville’s next two drives ended with a punt and another Baker interception.

The Black Bears added a touchdown shortly before halftime on Crittendon’s 10-yard run to make it 28-14 at intermission.

After having just 11 snaps on offense in the first half to 48 for Albertville, the Black Bears were determined to take away any momentum from Albertville.

“We knew it was time to put the game away,” Crittendon said.

The Black Bears added points on a five-yard run by Tyler Cooper and a 25-yard field goal by Noah Flood.