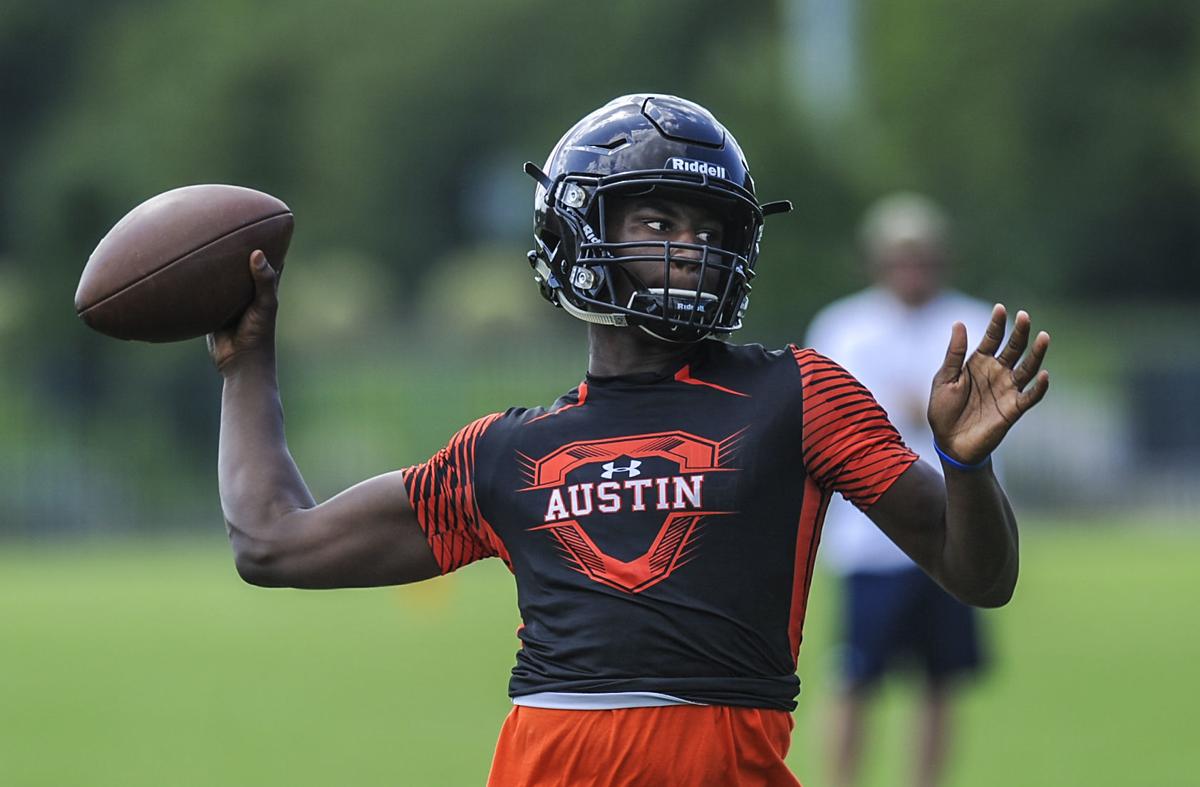 Quincy Crittendon takes over as the starting quarterback for the Austin Black Bears this season. [JERONIMO NISA/DECATUR DAILY] 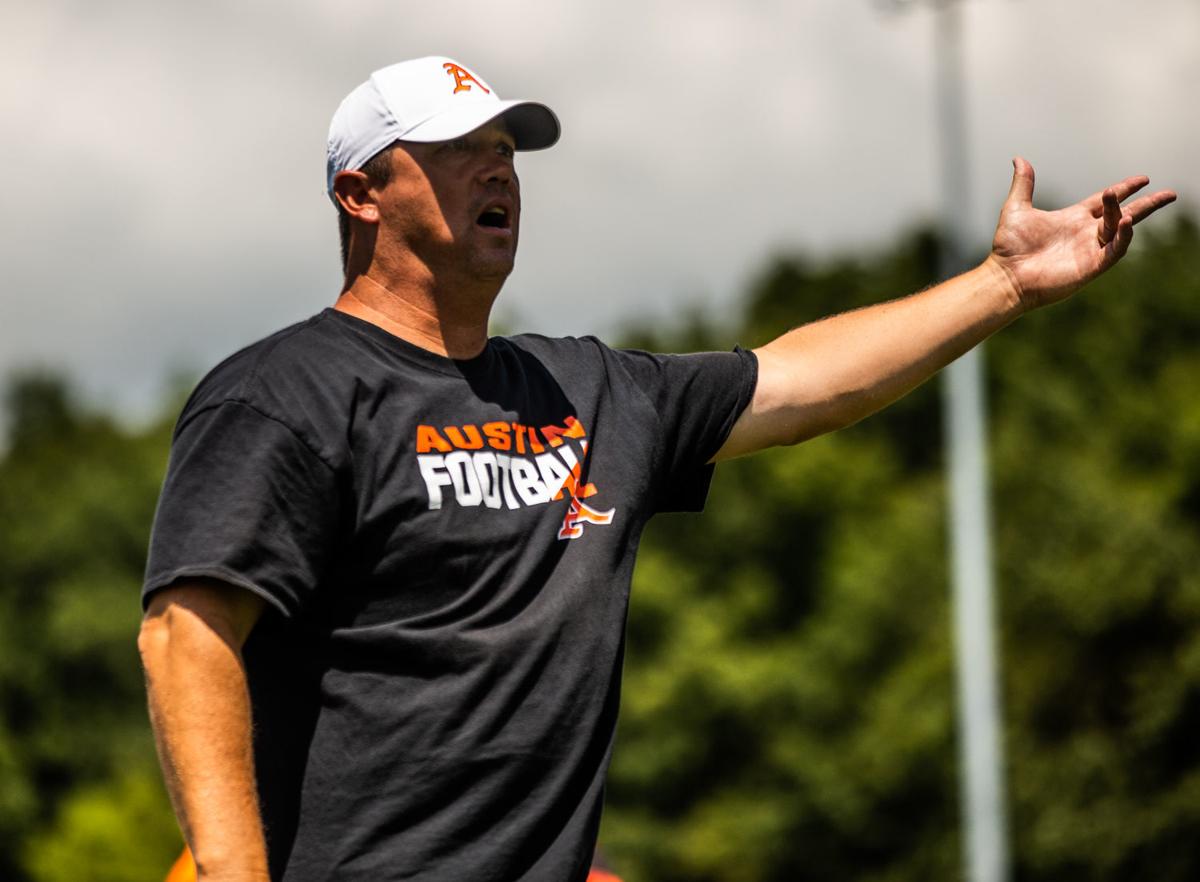 Jeremy Perkins is starting his 10th season at Austin with a 64-40 coaching record that includes six trips to the playoffs and two region championships. [DAN BUSEY/DECATUR DAILY]

Quincy Crittendon takes over as the starting quarterback for the Austin Black Bears this season. [JERONIMO NISA/DECATUR DAILY]

Jeremy Perkins is starting his 10th season at Austin with a 64-40 coaching record that includes six trips to the playoffs and two region championships. [DAN BUSEY/DECATUR DAILY]

Stars in the spotlight

Watch out for linebacker Charles Baker. After losing three All-State players on the defensive side of the ball, Austin will rely on Baker to anchor the defense. The Black Bears will be young up front and at linebacker. The unit will be counting on Baker’s leadership, especially early in the season.

Lay of the land

The Black Bears are preparing for their second season in Class 7A, Region 4. The region rivals are Florence, Bob Jones, James Clemens, Grissom, Gadsden City, Huntsville and Sparkman.

The out-of-region schedule is Hartselle at home Friday in the season opener. Then it’s at Decatur next week and Athens at home to close out the regular season.

Jeremy Perkins is starting his 10th season leading the Black Bears. He’s the winningest football coach in Austin history with a 64-40 record. That includes six winning seasons, six trips to the playoffs and two region championships.

The Black Bears went 7-4. After losing the season opener at Hartselle, Austin won its next seven games. The Black Bears closed out the regular season with a home loss to James Clemens, 36-23, that decided the region championship, and a loss at Athens, 21-18. Austin ran into a buzz-saw in the first-round of the playoffs and lost at home to Mountain Brook, 31-0.

It’s been quite a run for the Black Bears with a 29-9 record. That includes Class 6A region championships in 2016 and 2017. Austin finished second in Class 7A, Region 4 last season.

Words to grow on

“Overcoming adversity is an important part of football,” Perkins said. “We’re not the same team we were when we ended spring practice. We need to jell into a team as quickly as possible to be ready for what’s ahead of us.”

It’s Q time at Austin. The Quincy Crittendon era at quarterback begins Friday against Hartselle. After a season as the backup, Crittendon is ready to take over.

“Quincy is a special talent with a world of potential,” Perkins said. “He’s a student of the game and is eager to learn. He’s always looking for ways to grow every day.”

Perkins has praise for Crittendon’s work ethic, especially in the spring and summer.

“He’s working on making better decisions,” Perkins said. “The mental aspect of the game is growth that only comes with experience.”

Crittendon will be surrounded by plenty of weapons in the backfield and at receiver. Junior receiver Tre Shackelford led the Black Bears with 40 catches last season. Seniors Jabari Brown and Kenneth Allen, along with Jaden Baker, round out the top group of receivers.

Deuces are wild with the running backs. Senior Tybo Williams wears No. 2. Behind him on the depth chart are No. 20 Kendall Scales and No. 22 Jevon Jackson.

The question mark for the Austin offense is in the line, where only one starter returns at left guard in senior Bradley Barnett.

Junior Griffin Sikes is moving from tight end to left tackle. Three more juniors fill out the rest of the line with Alex Machado at center, Colton Collier at right guard and Jaylon Munford at right tackle. Also competing for playing time in the offensive line are junior Dontavian Bass and sophomore Giovanni Johnson.

Despite the loss of Steward, the defensive backfield is one of the strengths of the team. There is talent and experience returning with starters JT Johnson, Jaylon Barrett and Tarik Sykes. Jaden Baker rounds out the group.

The defensive line starts with Jalik Malone (6-foot, 310 pounds) at nose guard. Sophomore Jeremiah Burgess will back him up. Michael Wiley is a returning starter at tackle. The defensive ends are Daiontrelle Hubbard, Isaiah Carlisle and Dontavian Bass.

The Black Bears' defense got even stronger this month when Awysum Harris rejoined the team. The senior had moved to Rome, Georgia, in April. He's expected to add depth at defensive end and linebacker.

Take your pick. Austin opens the season on Aug. 23 when Hartselle makes its first visit to the Black Bears’ new stadium. Austin travels back to the old home stadium the next week for the showdown with Decatur at Ogle Stadium.

“There is really good competition in our region,” Perkins said. “The challenge for us is to get better each week. We have to do that just to have a chance to advance to the playoffs.”