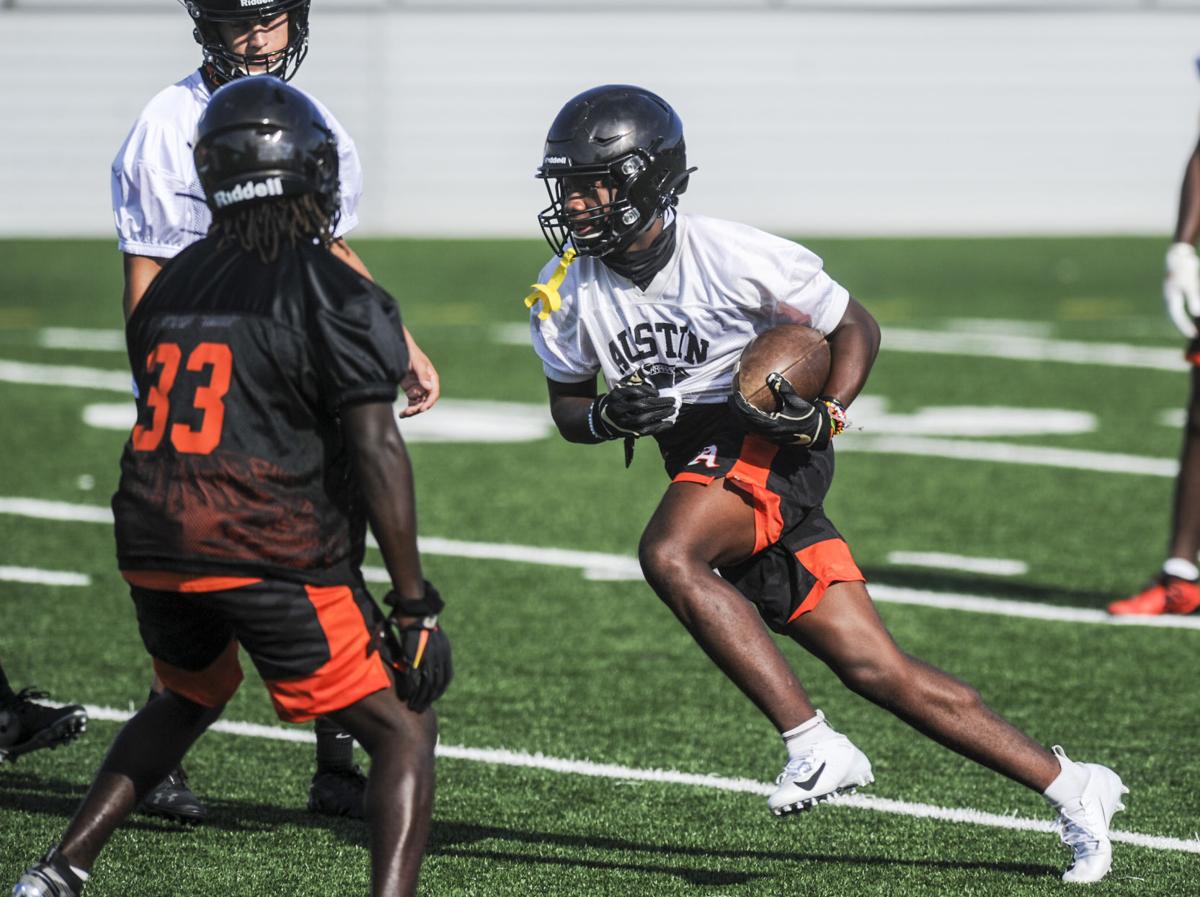 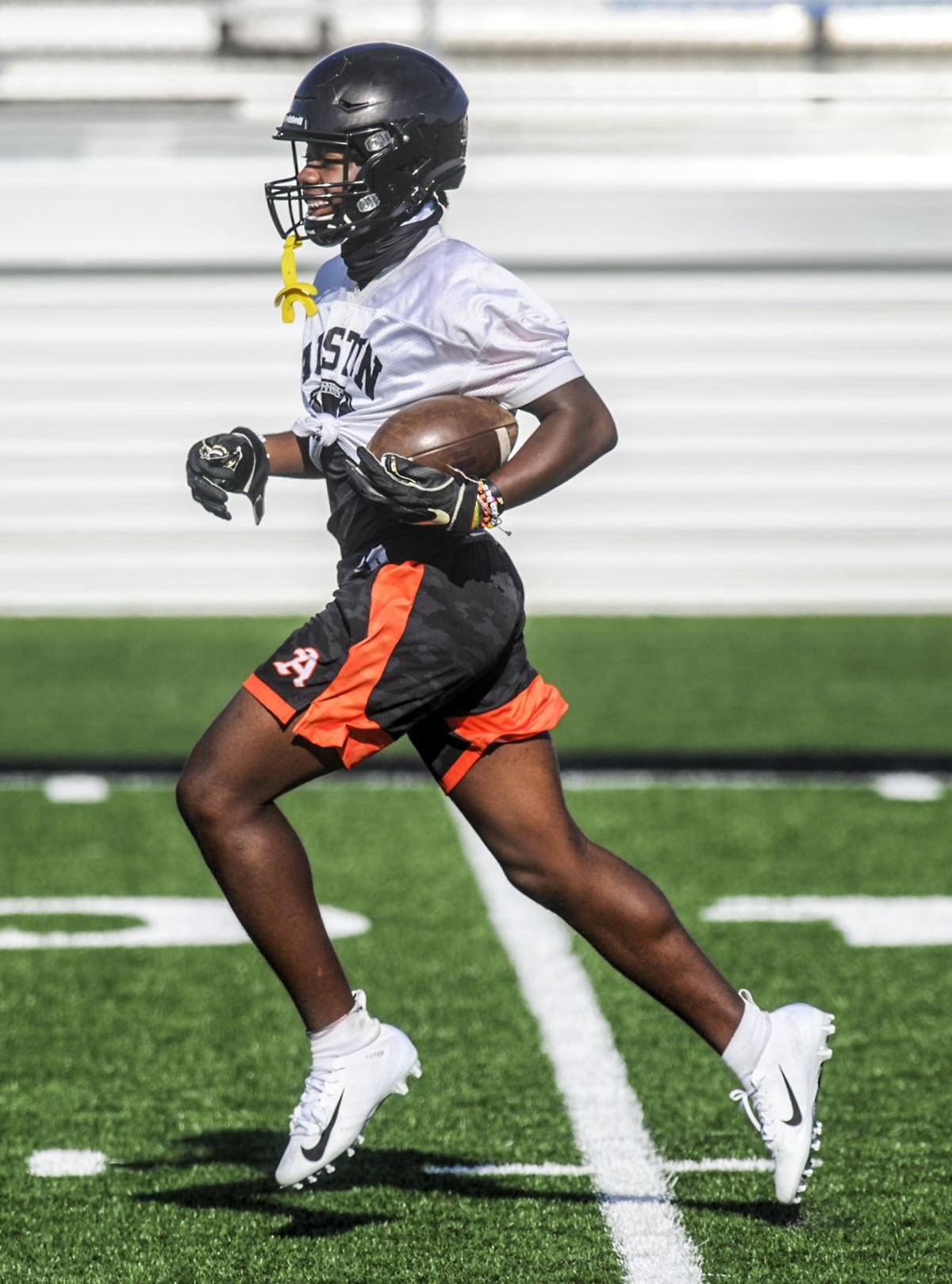 Austin's Tre Shackelford gets ready for the 2020 season during practice last week. He had 40 catches for 872 yards and 10 touchdowns last season. [JERONIMO NISA/DECATUR DAILY]

Austin's Tre Shackelford gets ready for the 2020 season during practice last week. He had 40 catches for 872 yards and 10 touchdowns last season. [JERONIMO NISA/DECATUR DAILY]

In the history of high school football in Decatur over the last four or five decades, no last name has grabbed the spotlight more than Shackelford.

There were the brothers Fred, Stanley, Darnell and Craig, who played for the Decatur Red Raiders. Then there was their cousin James and his nephew D.T., who both wore the black and orange of Austin.

The four brothers at Decatur and James were all running backs. They piled up lots of yardage and touchdowns in their careers. Craig and James were a story in the 1980s when they squared off in the Austin-Decatur rivalry.

Craig went on to play at Southern Miss. After becoming a defensive force at Austin, D.T. starred at linebacker for Ole Miss.

The latest in the family line is Tre, son of James and first cousin of D.T. An Austin receiver, Tre Shackelford is looking to build on a junior season that earned him All-State honors. This will be his third year in the starting lineup.

“You grow up thinking about someday playing football for Austin and then when you get here, it goes by so fast,” Shackelford said.

Just like all the Shackelfords that have come before him, Tre (6-foot-1, 190 pounds) has a talent for making big plays.

An example of what Shackelford can do came in the Class 7A state playoffs against eventual state champion Thompson. Austin had the ball at its 27 when quarterback Quincy Crittendon lofted a pass down the left sideline just inside the Thompson 35. Tre was the target.

“The defender was in front of me, and I knew the only way I could catch the ball was reaching back with one hand,” Shackelford said.

That’s exactly what Shackelford did. One-handed catches are nothing new for him. Then he finished off the play by tight-roping down the sideline into the end zone. It was another big play in a season with 40 catches for 872 yards and 10 touchdowns.

“I’ve had college coaches tell me that they like players who play with a swagger,” Shackelford said. “They aren’t looking for showboats, and there is a fine line between the two.

“I’m a humble person and I don’t talk a lot during a game. I like to let my work on the field do my talking.”

This could be a big season for Austin football. The offense returns Shackelford, Crittendon, running back Jevon Jackson and four starters on the line. The defense has six starters back, led by lineman Jalik Malone, defensive back Jaden Baker and linebackers Braxton Lyle, Jakari Fuller and Ronald Fletcher.

The Black Bears ended up 7-4 last season after winning their first five games. Thompson beat Austin, 54-20, in the first round of the Class 7A playoffs.

“We didn’t go into that game with the right mindset,” Shackelford said. “We are better than that and we want to prove it this season.”

Shackelford’s ability on the football field has caught the attention of a lot of colleges. He has over a dozen scholarship offers. The list of schools includes Southern Miss, Jacksonville State, North Alabama, Troy, South Alabama, Liberty and Middle Tennessee. At least a couple of SEC schools, Ole Miss and Tennessee, have Shackelford on their radar.

The goal in the spring and summer was for Shackelford to visit colleges and show off skills in prospect camps. Unfortunately, those visits and the camps were canceled due to the pandemic.

“One of the big things that hurt recruiting a lot for everybody was not having spring practice in May,” Austin head coach Jeremy Perkins said. “That’s when we usually have a stream of college coaches come through here.

“When players visit college campuses, the coaches can eyeball them for their size. When they come see practice at the high school, they can see how they move, how hard they work and how they compete.”

Instead of getting to go against some highly touted defensive backs in college camps this summer, Shackelford has stayed in touch with college coaches via text, phone calls, Facetime and Zoom meetings.

“There’s no doubt that Tre will have the opportunity to play college football,” Perkins said. “Right now the question is will it be at the level he wants and that’s the SEC.”

At least one college coach has suggested that the best position for Shackelford in college might be in the defensive backfield. The domination of the passing game in college has changed what schools look for in defensive backs.

Colleges still need speed in the defensive backfield, but they also want length. DBs over six feet tall are a valuable commodity. Shackelford has displayed his leaping ability on the football field and on the basketball floor for the Black Bears.

“Sometimes it can be difficult to be a receiver when the team doesn’t throw the ball. If we run the ball five times in a row, that’s five times you know you probably won’t have a chance to get your hands on the football.”

Shackelford has started spending some time working with the defensive backs. Perkins said it is possible that he could play there this season, if needed.

“I’ll do anything to get to play in college,” Shackelford said. “If becoming a defensive back improves my opportunities, I’m all for it.”