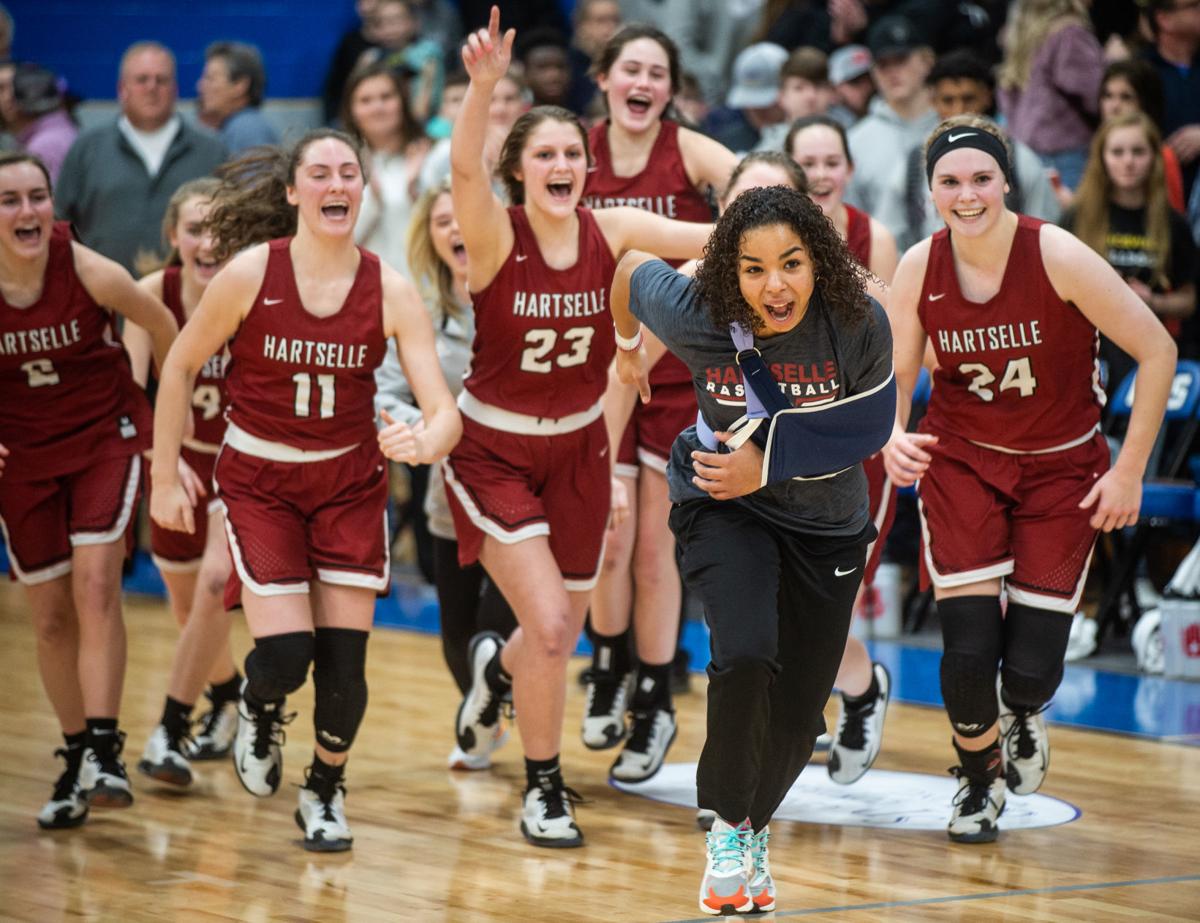 The Hartselle Tigers run to claim their trophy after defeating Priceville during the Morgan County Tournament on Saturday at Falkville High School. More photos at decaturdaily.com. [DAN BUSEY/DECATUR DAILY] 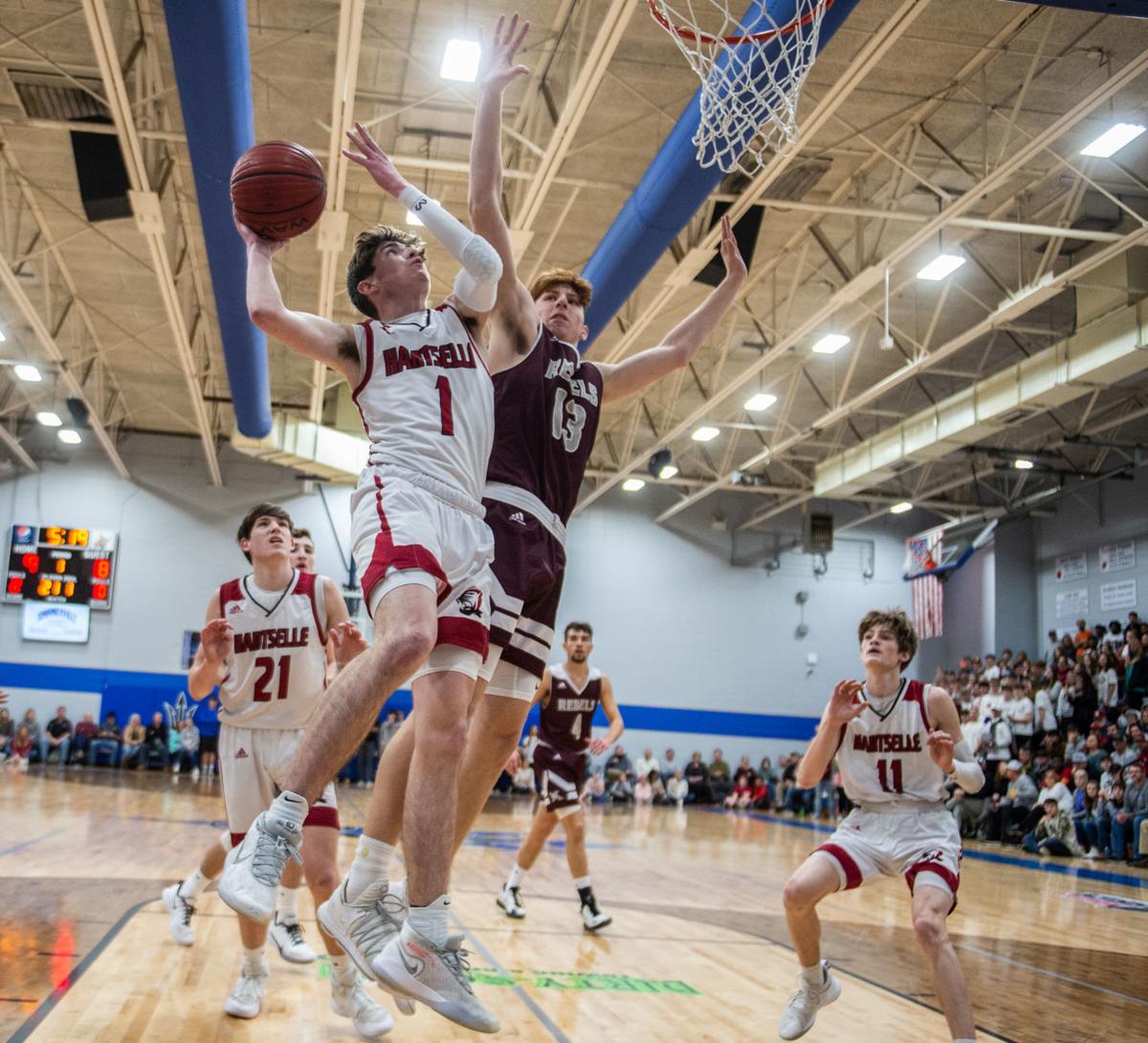 The Hartselle Tigers run to claim their trophy after defeating Priceville during the Morgan County Tournament on Saturday at Falkville High School. More photos at decaturdaily.com. [DAN BUSEY/DECATUR DAILY]

FALKVILLE — The Hartselle Tigers will have to make room for two new trophies this week.

The boys won their fourth straight county championship with an 80-52 victory over West Morgan. Brody Peebles was a repeat MVP winner. The junior scored 40 in the championship game.

Hartselle girls 50, Priceville 44: The Tigers were playing without leading scorer Masyn Marchbanks, who went down for the season Thursday with a separated shoulder. Priceville had momentum after knocking off defending champion Brewer on Friday.

The Tigers (17-10) used a tough defense and an offense that found life from Cartee and Hailey Holshouser, who moved over to Marchbanks’ spot at point guard.

“This bunch has worked hard to get better all season,” Hartselle coach Gary Orr said. “Tonight they all stepped up and got the job done. I’m proud of them.”

Hartselle held Priceville to just three points in the second quarter. The Tigers led 27-19 at halftime. Priceville cut the lead to two at 34-32 after three quarters. The Bulldogs got to within one with 1:38 to play, but failed to score another point.

“We were determined to win this game for Masyn,” Cartee said.

Cartee’s 20 points led Hartselle. She hit seven of eight free throws in the second half. Holshouser, who made the move to a new position in two days, scored 12 with six coming in the fourth quarter.

“I wanted us to be aggressive at the end of the half,” Hartselle head coach Faron Key said. “I called timeout and said I wanted us to turn it up a notch on defense.”

“This is awesome for our community to win this tournament,” Peebles said. “It’s a great way to get prepared for what’s coming up. We definitely have higher goals ahead of us.”

Priceville girls 57, Brewer 42: Friday’s rematch from last year’s finals saw Brewer jump out to a 12-2 lead. Priceville was stone-cold in the first quarter with two points on two free throws.

The Bulldogs’ first field goal came 10:11 into the game on a basket by Jenna Walker. That seemed to open the flood gates. Priceville would outscore Brewer 55-28 the rest of the way.

Senior Lannah Johnson, who is playing on two bad knees, scored nine points. She had two big 3s in the second quarter that helped turn the game around.

“I’m so proud of these girls,” Priceville coach Terrie Nelson said. “Lannah really stepped up big when we needed her. She’s given us great senior leadership all season.”

Burrows and Elizabeth Alexander each had 10 points for Brewer (16-8). Jacie Andrews scored nine.

West Morgan boys 72, Danville 68: The Rebels led 39-29 at halftime on Friday and looked to have the game under control with an eight-point lead with 3:21 to play.

Danville wasn’t ready to call it a night. The Hawks slowly whittled the lead to just three with 36 seconds to play, but could get no closer.

Muse led West Morgan with 22 points, including 12 in the fourth quarter. Owens had 14 and Kobe Griffin had 11.

KJ Melson led Danville (14-7) with 25 points. Kohl Randolph scored 20 and Wren Cole had 16. Cole had nine in the fourth quarter.

Would you be willing to pay a slightly higher Decatur Utilities bill in order to reduce sewer overflows?