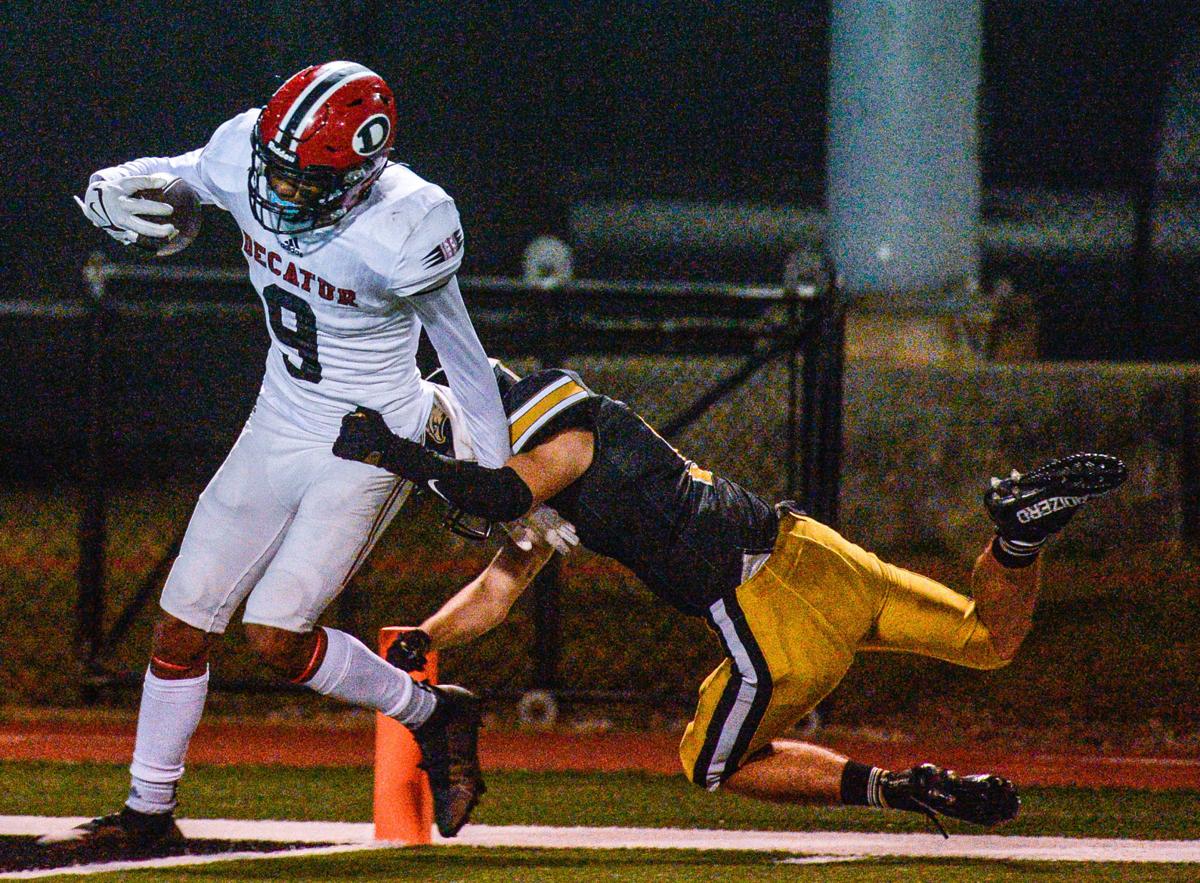 Decatur's Jayden Brown (9) scores a touchdown as he is tackled by Athens' David Christopher during the game in Athens on Friday. [JERONIMO NISA/DECATUR DAILY] 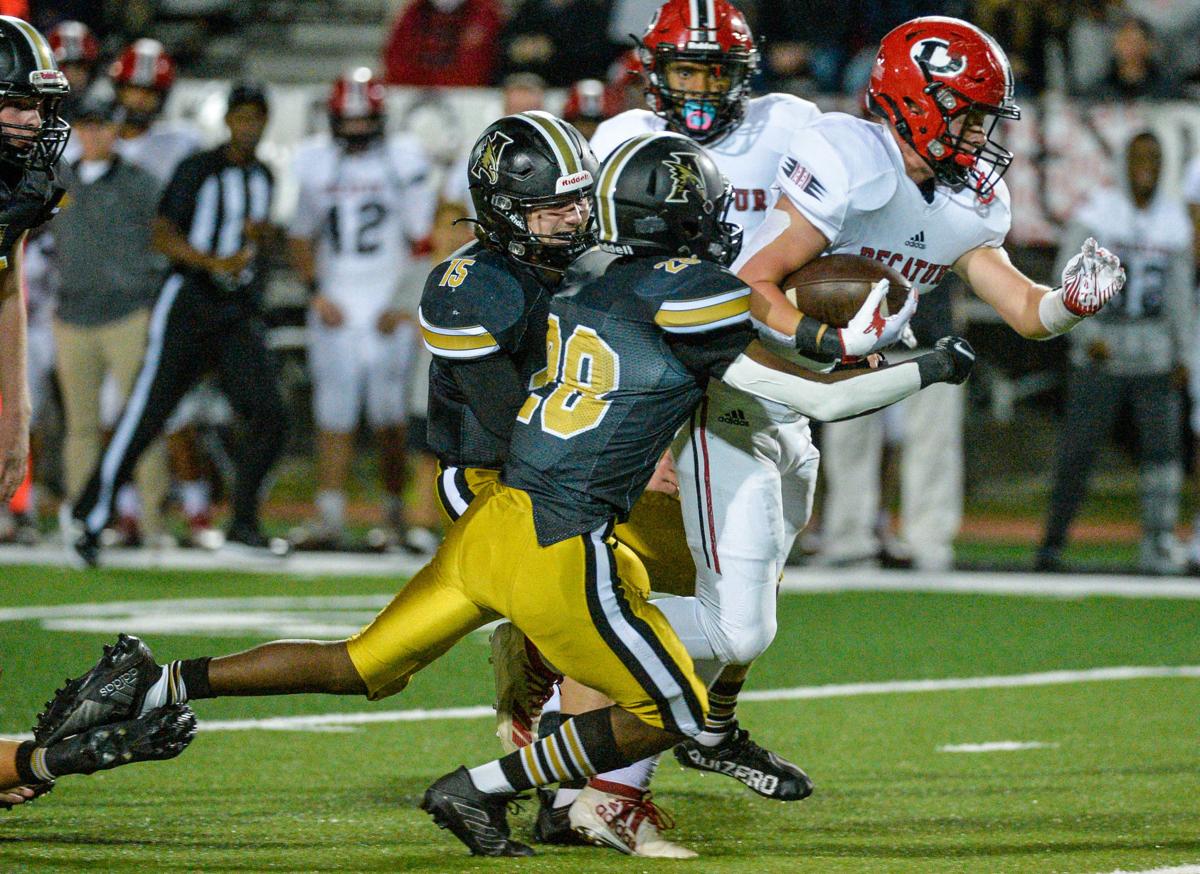 Decatur's Jack Waller carries for a first down during the game in Athens on Friday. [JERONIMO NISA/DECATUR DAILY] 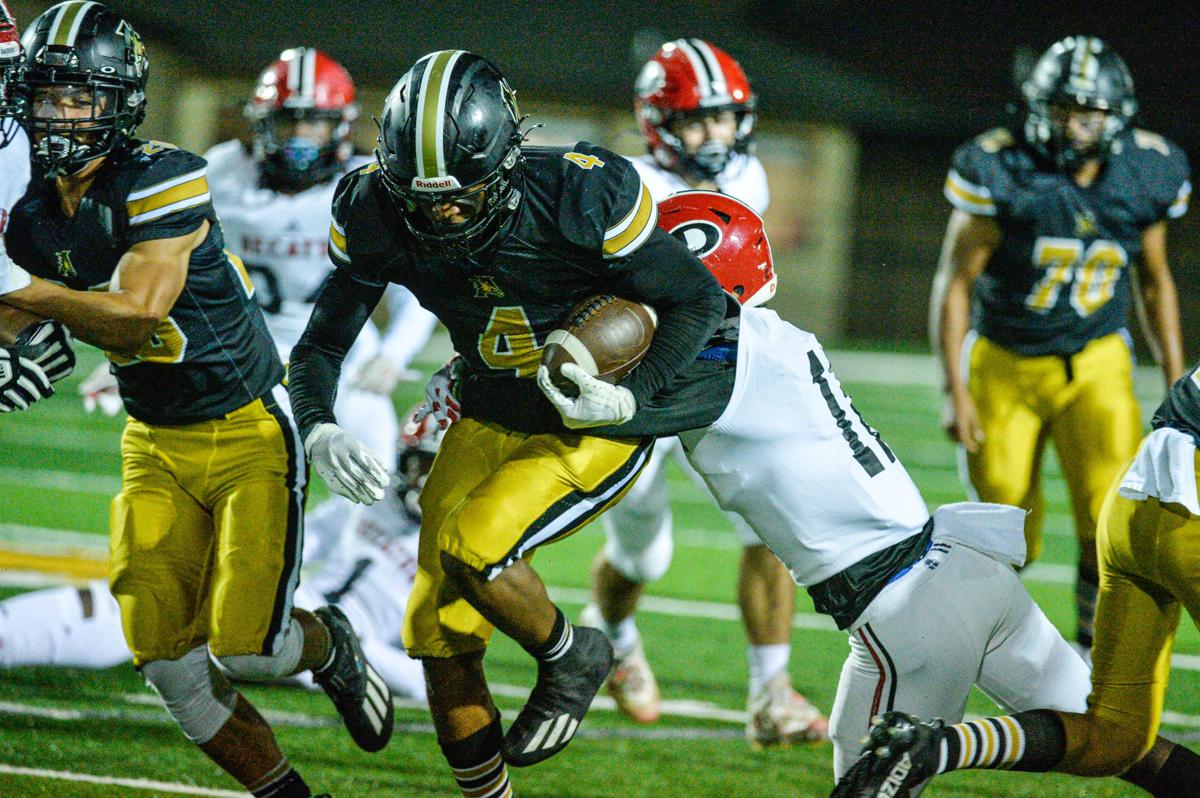 Athens' Kameron Gatewood carries for a first down as he's tackled by Decatur's Jackson Thatch during the game in Athens on Friday. [JERONIMO NISA/DECATUR DAILY]

Decatur's Jayden Brown (9) scores a touchdown as he is tackled by Athens' David Christopher during the game in Athens on Friday. [JERONIMO NISA/DECATUR DAILY]

Decatur's Jack Waller carries for a first down during the game in Athens on Friday. [JERONIMO NISA/DECATUR DAILY]

Athens' Kameron Gatewood carries for a first down as he's tackled by Decatur's Jackson Thatch during the game in Athens on Friday. [JERONIMO NISA/DECATUR DAILY]

ATHENS — Decatur picked up its fourth win in its last five games by overcoming a 13-point halftime deficit to beat Athens 56-34 and claim the final playoff spot from Class 6A, Region 8.

"They answered the bell every time," Decatur coach Jere Adcock said. "It's been a great group to coach, and it's been real disappointing to see us fall short a times, but their heart and their effort and their intensity and their focus has been the same every ball game."

Decatur quarterback Ellis Dickman had a touchdown pass to Jayden Brown and a rushing score. Banks Dement and Ryan Kirk each rushed for two scores. Josh Turner added a touchdown run. Charlie Zalusky recovered an Athens fumble. Jackson Thatch intercepted two passes late in the fourth quarter to help seal the win, including a pick-6 with 1:06 left in the game.

Jaden Jude threw a touchdown pass to Athens quarterback Brogan Gross. Kameron Gatewood had an 80-yard run and a 55-yard fumble recovery and return for scores. Gross finished with two scoring throws, one to Caiden Dumas and another to Dylann Roper.

"This team probably improved as much as any team I've ever coached from the beginning of the season to the end," Athens coach Cody Gross said. "If you look at our record, you would think that's not the case because we started the season 3-1 and ended up ... 4-6 (3-4 in the region). But we were a lot better football team at the end of the year than we were at the beginning of the year."

Athens scored first on a trick play, executing a reverse that resulted in Jude's five-yard pass to Gross at the 2:26 mark of the first quarter.

Decatur responded on its next possession with Dement scoring on an eight-yard run with 11:54 left in the second quarter.

The teams traded touchdowns until Gross' 73-yard touchdown pass to Dumas put Athens ahead 28-14 following a 2-point conversion from a Jude pass to Roper with 5:30 remaining in the first half.

Decatur pulled within a touchdown with Turner's eight-yard run (2:19), but Athens closed out its first half with Gross connecting with Roper for a 19-yard touchdown 11 seconds before intermission.

Decatur scored touchdowns on each of its six second-half offensive possessions. Dickman's one-yard run with 18 seconds left in the third quarter gave Decatur the lead for good.

"We fought through so much adversity this year," Dickman said. "And we were destined to win a big one."

"I was like, 'We've got it, baby,'" Thatch said about his touchdown return.

Adcock was pleased with the Red Raiders' resilience.

Decatur kicker Owan Poovey said the Red Raiders shook off their 0-4 start and refocused down the stretch.

"We turned it around, and we just had to show up," Poovey said. "Knowing we were 2-8 the last two years we decided it was finally a time for a change."

Decatur will host Huntsville on Friday to end the regular season. Athens' season came to a close against the Red Raiders.

What impact on students stemming from rising COVID cases in schools concerns you most?