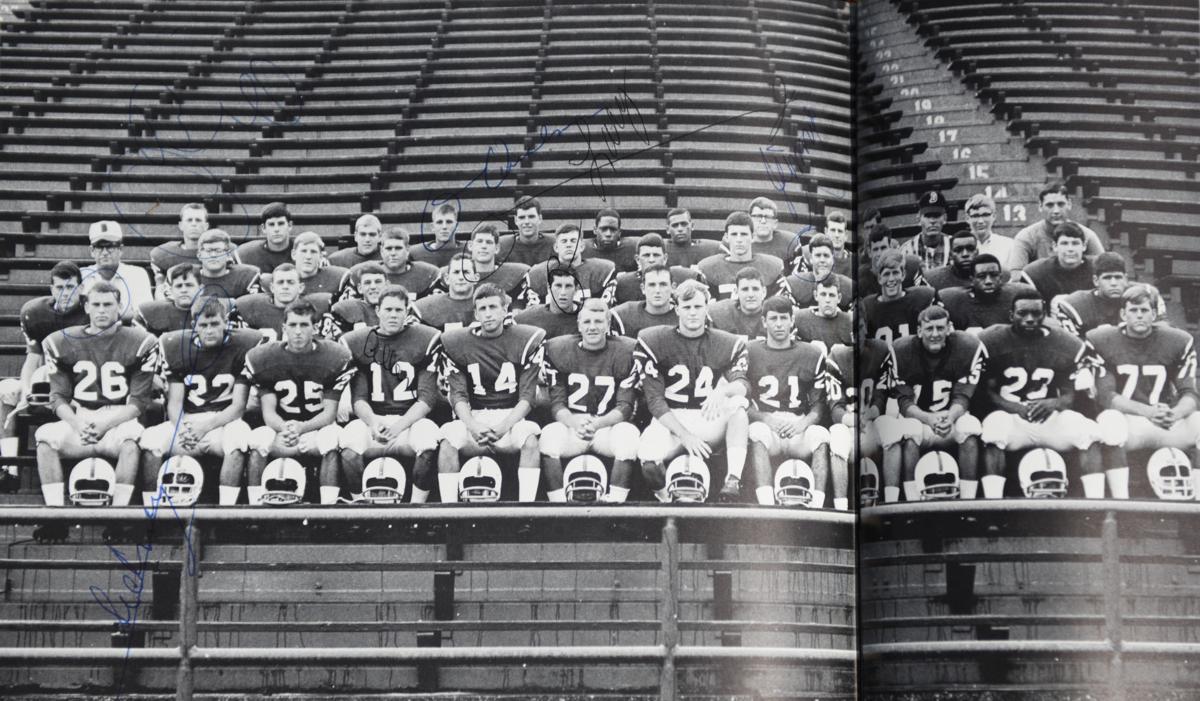 This photo of the 1967 Decatur Red Raiders was taken from the school’s yearbook. 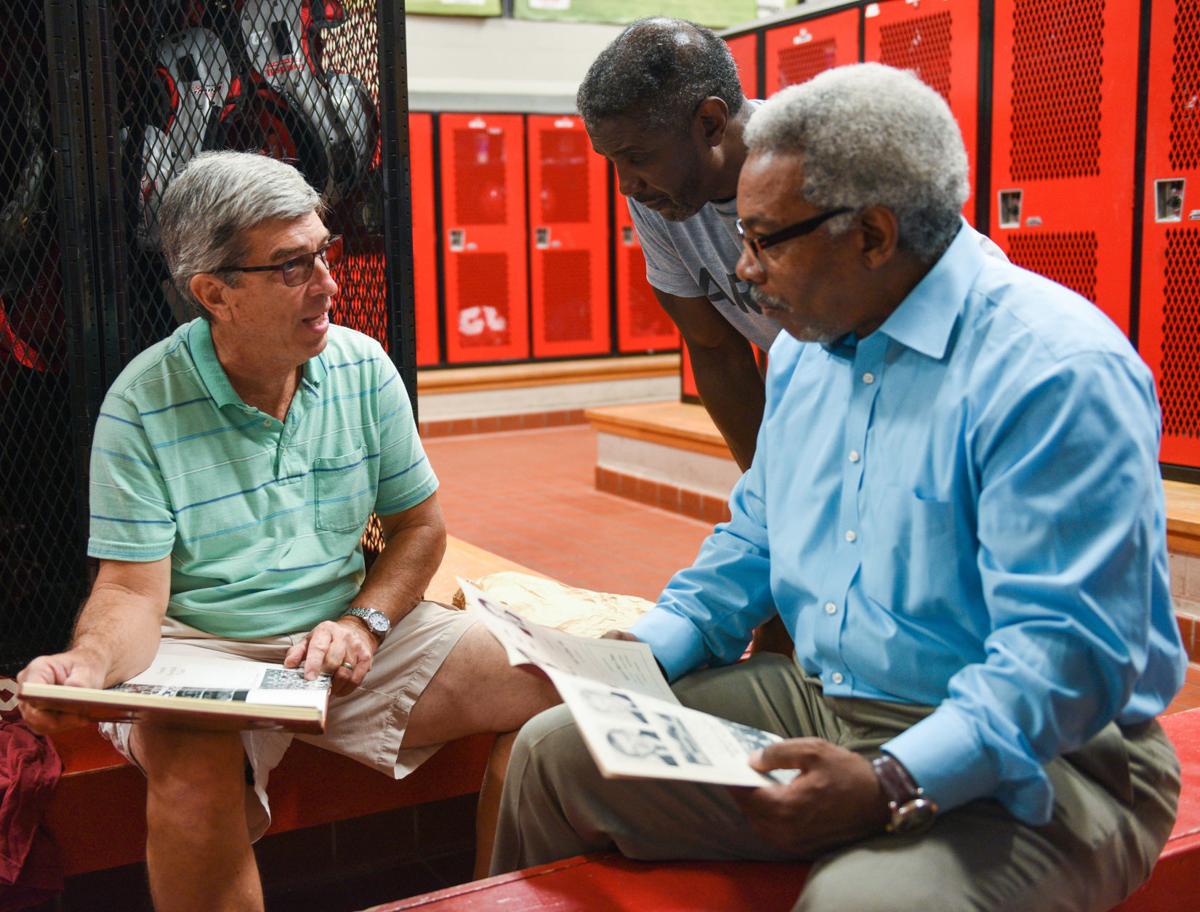 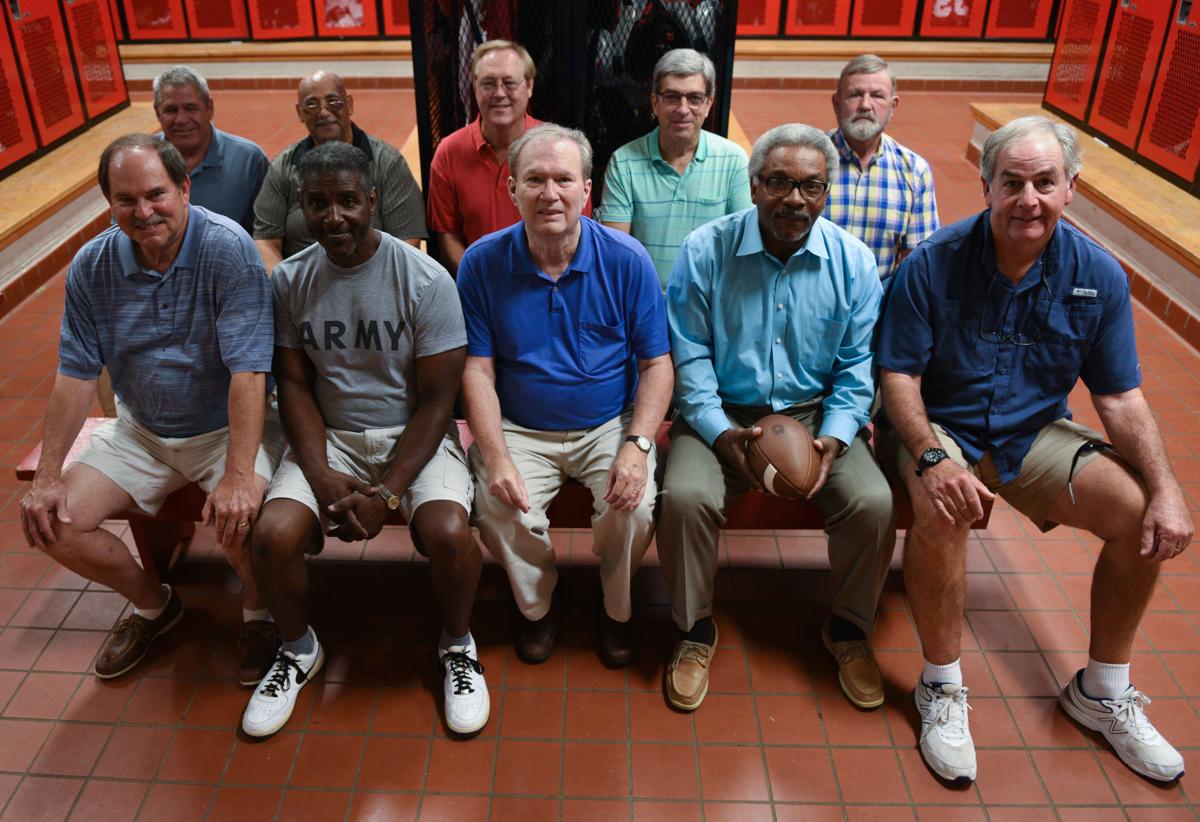 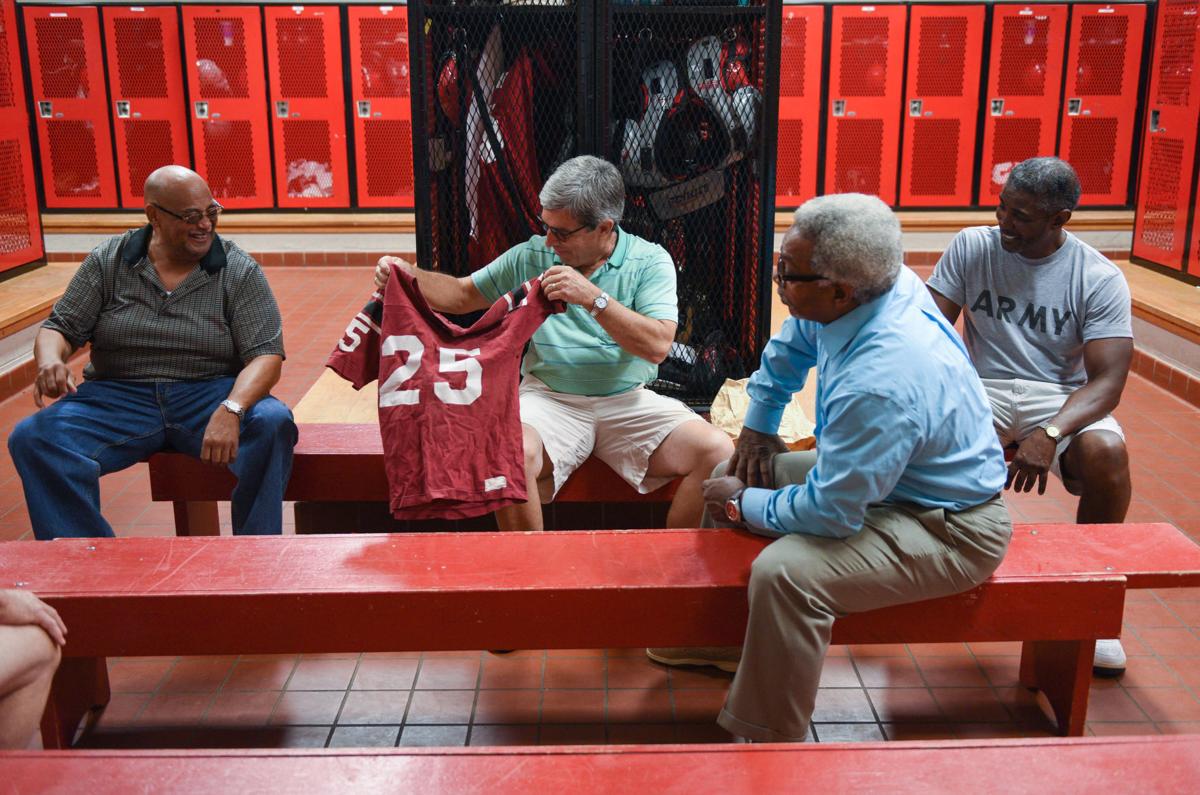 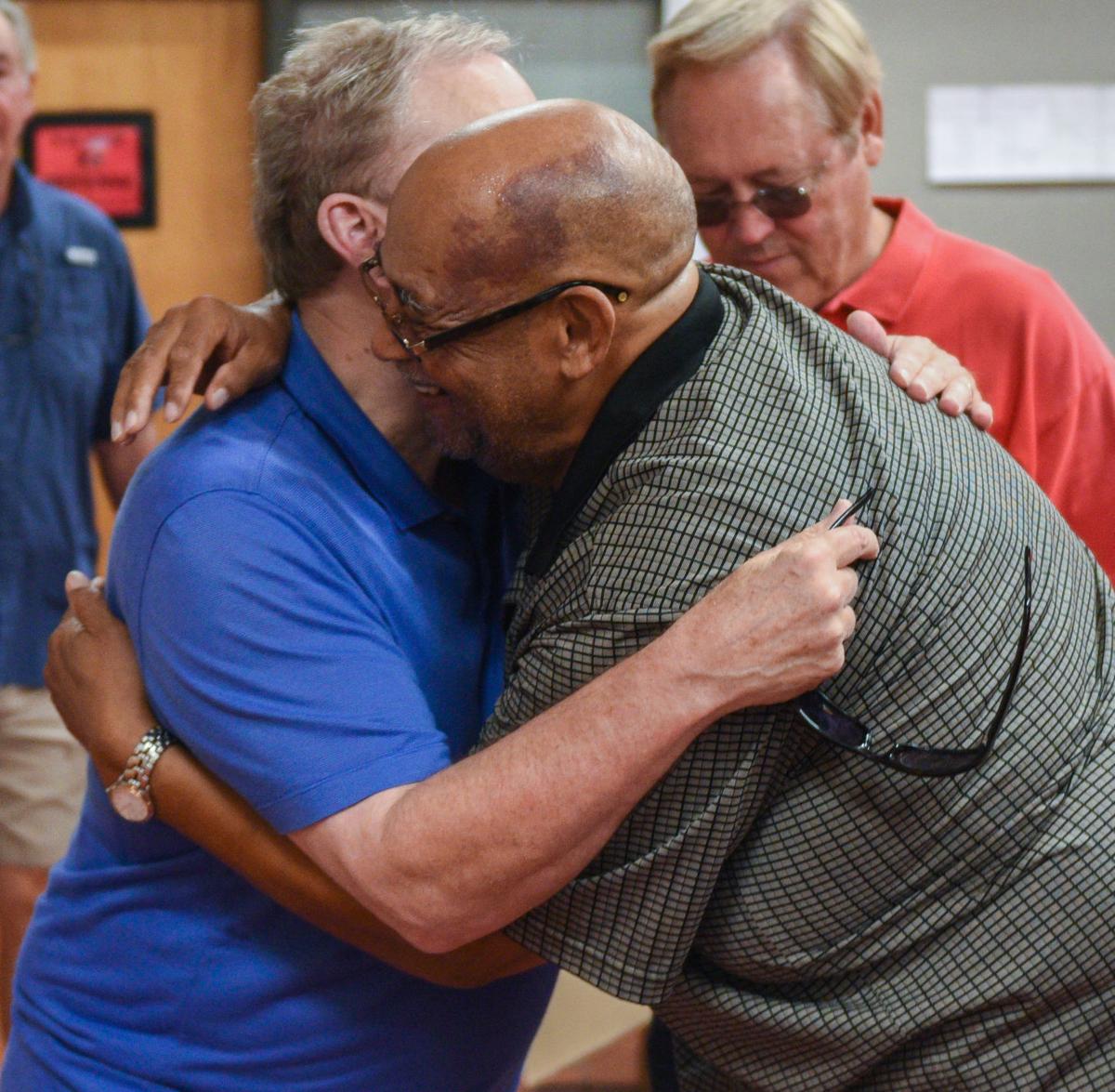 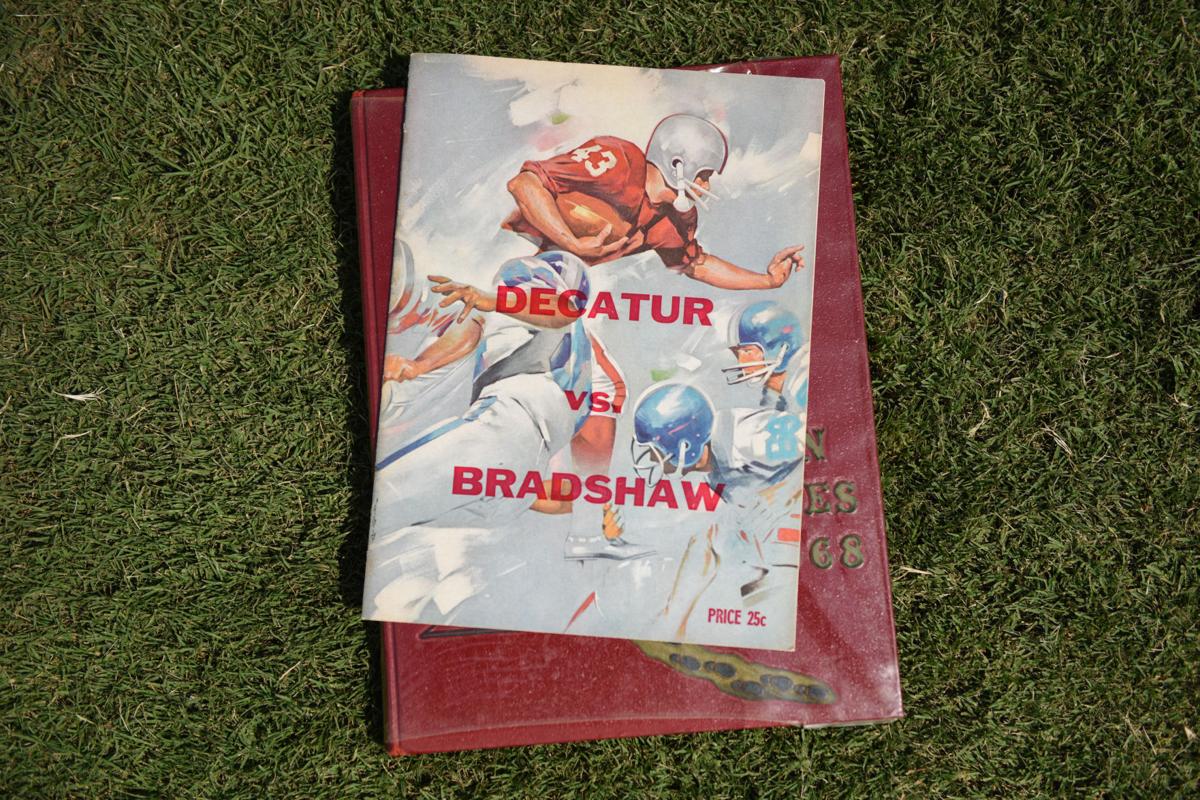 This is the game program from the first game of the 1967 season. [JESSICA GALLAGHER/DECATUR DAILY]

This photo of the 1967 Decatur Red Raiders was taken from the school’s yearbook.

This is the game program from the first game of the 1967 season. [JESSICA GALLAGHER/DECATUR DAILY]

Fite remembers it as the summer of a game changer for Decatur High football. Six players transferred from Decatur’s black high school, Lakeside, to play for the Red Raiders.

“My wish is that people will learn about the advancement of civil rights that these courageous few players caused not only in football, but in the city of Decatur,” Fite said.

Even though the U.S. Supreme Court had ruled in Brown vs. Board of Education in 1954 that separate but equal was unconstitutional, the ruling brought little change to schools in the South. Decatur High remained an all-white school. Lakeside, which is now Leon Sheffield Elementary, was the city’s black school. The opening of Austin in 1962 gave Decatur two white high schools.

In 1966, black students were given the freedom of choice. Since most black students lived closer to Lakeside and walked to school, most continued to go to school there. A few that lived closer to Decatur High enrolled there. One was Floyd Jackson, who tried out for the football team in the spring of 1967, but failed to make the squad.

Everything changed that summer. Earl Webb was hired as Decatur’s new head football coach. Webb faced a major rebuilding job at Decatur. The program had gone through some lean times after H.L. “Shorty” Ogle had retired following the 1963 season.

Wes Thompson was promoted to head coach and was dealt a difficult hand. He followed a coaching legend and had to deal with a greatly reduced roster due to the opening of Austin. The Red Raiders went 4-6, 3-6-1 and 0-10 in Thompson’s three seasons.

“I was working as a waiter at Burningtree Country Club that summer,” White said. “One day at lunch, someone said there was the new Decatur football coach. I met Coach Webb, and he asked if I played football. I told him I did at Lakeside. He said I should come to Decatur and play. He said to tell my friends.”

White spread the word and several of his friends were interested.

“Lakeside was less than a block from my house,” Outlaw said. “I thought I could be a running back like Jim Brown, but I couldn’t at Lakeside because Bobby Joe Pride was the star running back. I knew my best chance to play was at Decatur.”

Decatur players had to go through a tough summer workout program for the new coach. A handful of blacks made the first workout. Gradually, more came.

“I think at the most there might have been 16,” Outlaw said. “The workouts weren’t bad until we started running steps at Ogle Stadium. There wasn’t anything like that at Lakeside. That’s when some of the guys decided to go back to Lakeside.

“One day Bobby Joe Pride showed up. That was a real aha moment. It was a game changer for the team.”

Pride was a 5-foot-8, 155-pound dynamo. He had been Lakeside’s star player since the ninth grade.

“I wanted a challenge,” Pride said. “I wanted to see how I could do against different competition, and I thought it would give me more opportunities after high school.”

Holmes, Outlaw, Pride and Stevenson all agree the transition to Decatur could not have gone better. They said they felt accepted by the coaches and players.

“We were thrilled to have new teammates,” said Don Kyle, a two-term mayor of Decatur. “We didn’t win a game the season before and we didn’t want to go through that again. We thought they could help us.”

In fact, Decatur had gone 15 games without a win dating to Oct. 7, 1965. It looked like the streak was going to be snapped in the ’67 opener with Bradshaw at Ogle Stadium. Pride’s touchdown put Decatur up 7-0. The game was tied 20-20 with time for one more play. Fite’s 35-yard field-goal attempt was blocked, and the game ended in a tie.

“It was still a morale victory for the program,” Fite said.

Webb turned the tie into a positive. When the team walked in the locker room Monday, they found a note from Webb on the chalkboard: “We’re still undefeated.”

“Coach Webb was great at psychology,” Kyle said. “He was the right man at the right time for Decatur football.”

The Red Raiders used the tie as a springboard to success. Decatur won its next three games, 25-6 over Athens, 33-0 over Austin and 39-7 over Hartselle. The win over Austin remains the most lopsided score in the River City Rivalry.

Pride was the star weapon on offense. The Decatur Daily labeled him “The Pride of Decatur.”

“We were a novelty wherever we played in the Tennessee Valley,” Outlaw said. “A lot of people had never seen blacks play football with whites.”

Racial taunts from fans and opposing players were a part of each game. Some games got really ugly. Outlaw remembers one game at home where he was ejected after a difference of opinion elevated beyond words.

“I left the stadium and went home before the game ended,” Outlaw said. “After the game, some of my white teammates, led by Don Kyle, came to my neighborhood looking for me. They wanted to make sure I came back.”

Part of the price for the early success was a rash of injuries. Decatur lost its next five games: to Butler, Lee, Cullman, Huntsville and Coffee.

“I remember before the Butler game, Coach Webb told me that Alabama was there to scout me,” Pride said. “I got knocked out cold in that game and we got beat pretty bad (28-0).”

Decatur closed out the season with a 34-0 thumping of Walker to finish the season 4-5-1. That’s not a good record by today’s standard for Decatur football, but considering where the program had been it was a huge step forward.

“I think we got the program turned in the right direction,” Kyle said. “Four years later, Decatur won a state championship.”

In the 48 seasons since 1969, Decatur football has had 37 winning seasons and 18 seasons with nine or more victories.

“Playing at Decatur was one of the greatest experiences of my life,” Stevenson said. “I wouldn’t change anything about it.”

Outlaw returned to Lakeside after one year at Decatur. Today, he’s a retired United Methodist minister living in Daphne.

“I enjoyed my time at Decatur,” Outlaw said. “That next spring, Dr. Martin Luther King was assassinated. I just thought with everything going on, it was best to return to Lakeside.”

White, who lives in Huntsville, had to leave Decatur in the middle of the school year to move to Toledo, Ohio, after his mother died.

“I enjoyed the experience and still value it today,” White said. “I think we did a lot for the football program, but also the city.”

Pride’s decision to try and enhance his opportunities after high school paid off. He signed with Florence State Teacher’s College, now known as the University of North Alabama. He was the first black football player to sign a scholarship with a predominantly white college in Alabama. The milestone earned him a story in Jet, a popular national magazine for blacks.

“That was pretty cool to be in Jet,” said Pride, who still holds some UNA rushing records.

After Pride graduated, Holmes moved up to being the Red Raiders’ star running back. After the 1969 season, he signed with Tennessee-Martin. He was in the first group of blacks to sign to play football at that college.

“I got to be a first twice,” Holmes said.

After college, Holmes signed a free agent contract with the Miami Dolphins and later went to training camp with the Houston Oilers. Today, he’s finishing up his final year in education in Martin, Tennessee, where he’s been a teacher, coach and principal.

“I get back to Decatur about once a month,” Holmes said. “It will always be a special place in my life.”

Here’s the roster for Decatur’s first game of the 1967 season vs. Bradshaw: