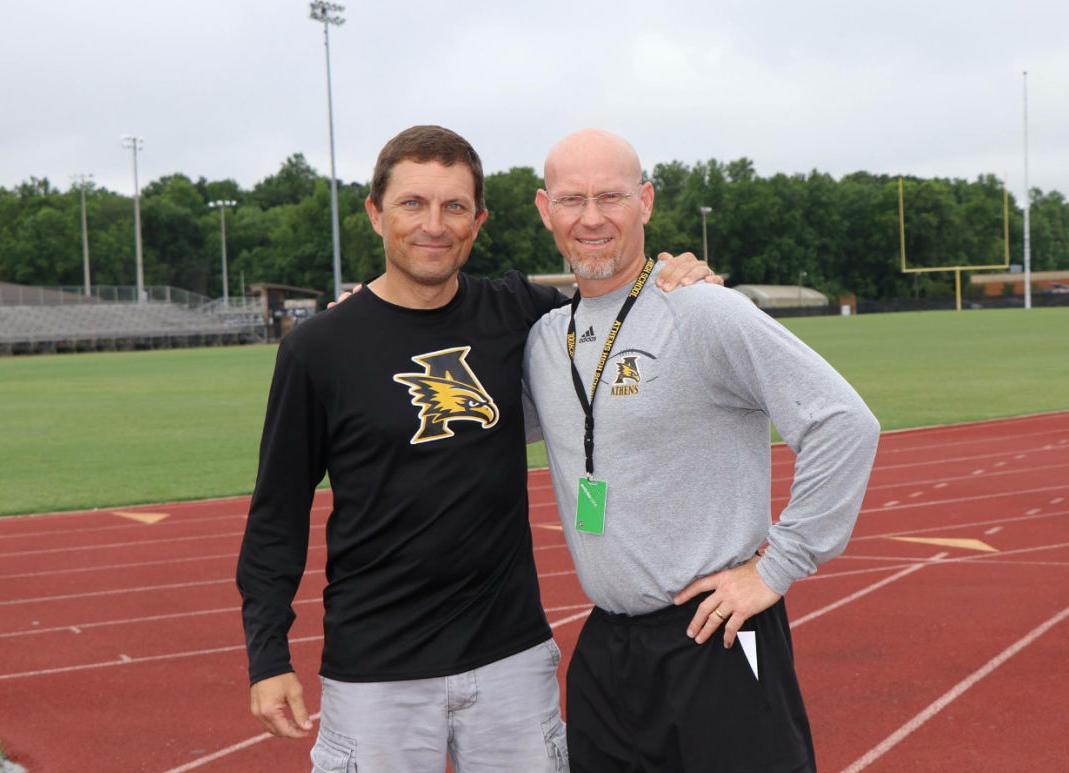 Athens head football coach Cody Gross, left, and assistant coach Sam Graham have been friends since their days at the University of North Alabama, when they played on three national championship teams. [COURTESY PHOTO] 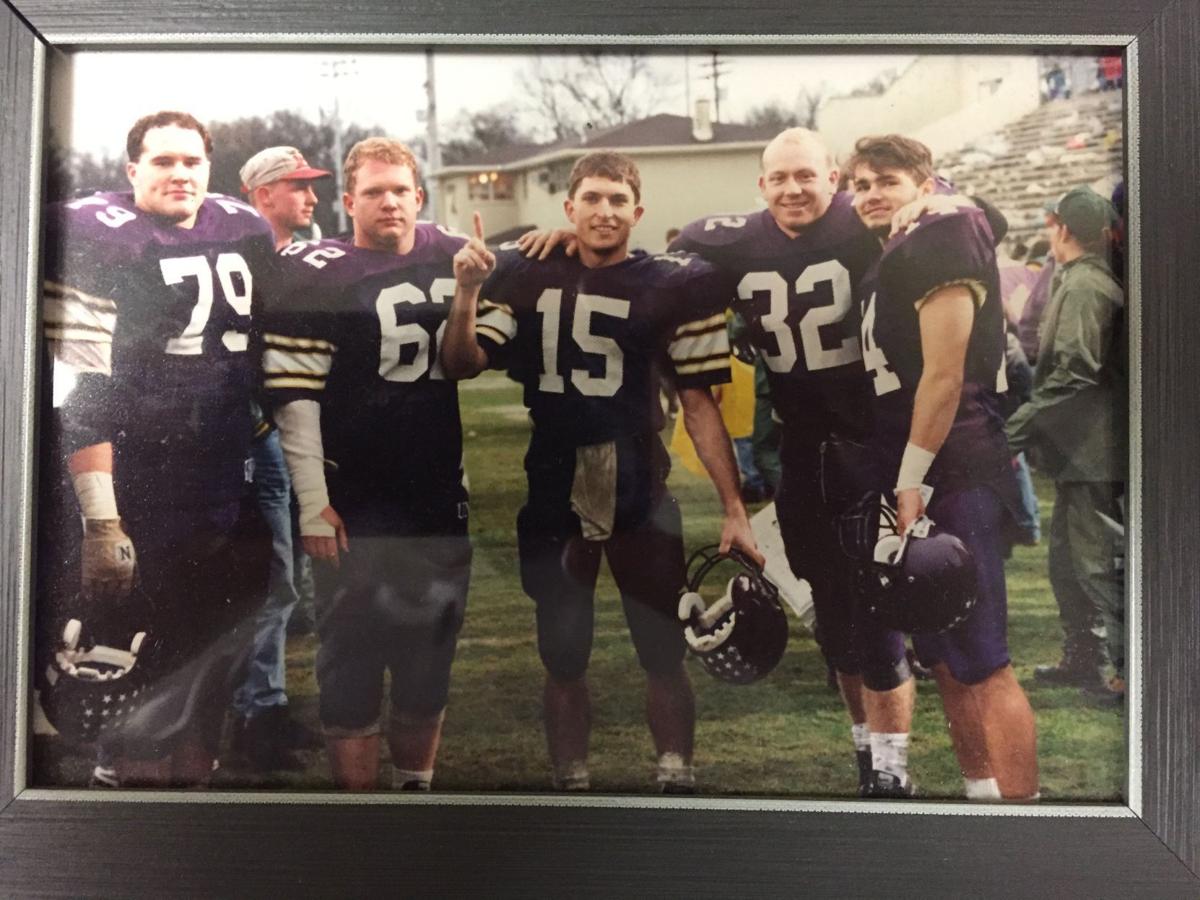 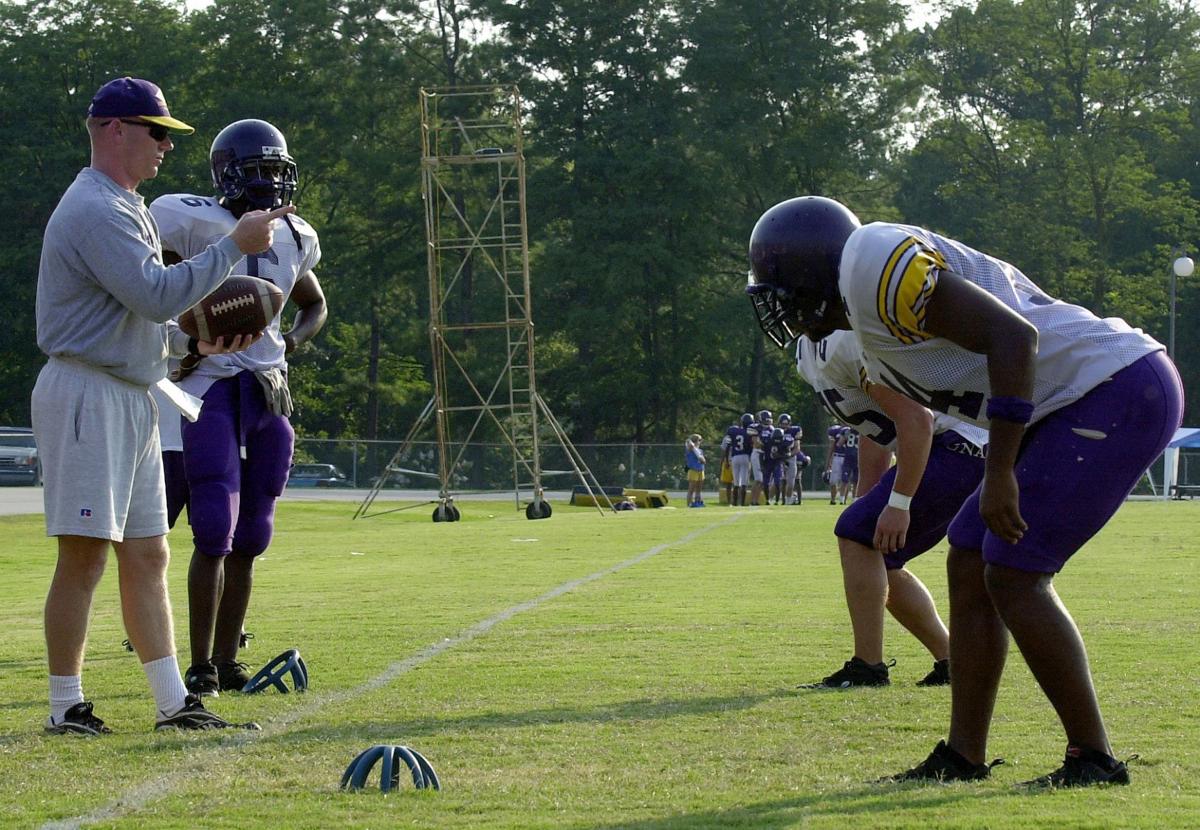 Athens head football coach Cody Gross, left, and assistant coach Sam Graham have been friends since their days at the University of North Alabama, when they played on three national championship teams. [COURTESY PHOTO]

ATHENS — The locker room for Athens assistant football coaches in Larry McCoy Stadium is not big. There’s room for each coach to have a small locker with his name on it.

The position of the locker with the name “Graham” seems to give it center stage among the rest. That’s appropriate because assistant coach Sam Graham is the person who takes center stage when he’s in a room.

“Whenever he walks through the door, we all get better,” Athens head coach Cody Gross said. “That’s just how it is with Coach Graham. He makes everybody feel special every day. He wants to make everybody he meets smile.”

Graham’s appearances in the Athens field house will be limited this season. He’s at home in Sylvania recovering from a procedure in June to help him in his battle with multiple sclerosis. The procedure drained his immune system down to zero. To avoid infection, he can rarely leave home.

“I can’t even go to church,” Graham said. “The doctor said everybody will want to hug your neck or shake your hand. I can’t take a chance because somebody could be carrying germs and not even know it.”

Graham and Gross are the epitome of teammates having each other’s back. That goes back to their days at the University of North Alabama, where they played on three national championship teams. When Gross came to Athens to rebuild the football program, Graham answered the call to come help. When Graham decided earlier this year it was time to do something to fight the MS, Gross answered the call to help.

“They are two of the most unselfish players I’ve ever coached,” former UNA coach Bobby Wallace said. “They were great players and great leaders for our team. What they have done for each other does not surprise me.”

Football brought Graham and Gross together in 1992 at UNA. Graham was a linebacker in his second season after being redshirted. Gross was a freshman quarterback. They became friends through a Bible study group started by UNA assistant coaches Bill Hyde and Willie Slater.

“Football brought us together, but us both being Christians was the draw to our friendship,” Gross said. “It was an unusual matchup. We played on opposite sides of the ball. We rarely practiced on the same end of the field. We rarely had team meetings together, but when we did, he sat with the defense and I sat with the offense.”

They eventually became roommates for their last two years at UNA.

“He was just a pretty-boy quarterback that played on what I call the communist side of the football field,” said Graham, who turns 44 Friday.

When they finished their college careers in 1995, Graham and Gross both got into coaching with the plan to someday work together.

“We were both assistants at UNA for a couple of years,” Gross said. “I left for Delta State and he stayed at UNA, but the plan was for us to get back together someday.”

That day came when Gross was named the head coach at Athens in February 2016. One of his first hires was Graham.

“Cody Gross has always been like a brother to me,” Graham said. “It pulled at my heart strings that he wanted me on his staff. I wanted to do everything I could do to help him be a winner.”

Graham’s hire came with a stipulation. He did not want to move his family from Sylvania. Because his family had made several moves during his coaching career and because his oldest daughter was near her senior year in school, Graham said he would commute from his DeKalb County home.

“It’s not a bad drive. You get on 72 in Athens and go to Scottsboro and then up the mountain,” Graham said. “It gave me and the good Lord a lot of time together.”

During last football season, Graham would spend the night with the Gross family on Fridays, Sundays and Mondays.

Graham was diagnosed with MS in 2010. Looking back, he thinks the first signs of the disease that attacks the central nervous system may have been in 2007.

“The day he called and said he had been diagnosed with MS, he said he didn’t want me feeling sorry for him and didn’t want to talk about it,” Gross said. “He said something that he’s said a thousand times since, ‘A million people have it much worse than I do.’ ”

Graham became the man in charge of the Golden Eagles' conditioning and weight room. He turned the team on with his energy and drive. His knack for clever sayings also gained some new fans.

“He’s got hundreds of sayings,” Gross said. “At first when you hear them, you think he’s just a country hick talking, but when you start to think about what he said, the wisdom is amazing.”

Gross said his favorite is “you can’t purify water by painting the pump.” Other sayings from Graham are “it’s all about the unseen” and “innards are more important than outards.”

The 2016 season was frustrating for Athens. The Golden Eagles went 3-7 with one loss by seven points and two each by three points. During the season, Gross noticed Graham having some trouble walking.

“He never complained and would always say again that, ‘A million people have it worse than I do,’ ” Gross said.

After convincing by doctors and his wife Ann, Graham agreed to start a procedure with a drug called Lemtrada. It’s a prescription infusion medicine used to treat adults with relapsing MS. The drug is administered in eight dosages over two years. In many cases, it has stopped the progression of the disease.

Lemtrada is expensive. While waiting for insurance approval, Gross started a drive at youcaring.com to raise $50,000. The hashtag for the campaign is #TPW, which stands for Tough People Win. That’s another of Graham’s sayings. Athens is wearing TPW on the front of its helmets this season. So far, $51,000 has been raised.

“It’s a testament to a guy who lives his life in a selfless, Godly way,” Gross said.

The insurance approval eventually did come. The money raised in the youcaring account is being used to make Graham’s home more accessible for him.

“Mark White, who played for me at Lauderdale County, actually got the fundraising started,” Gross said. “It didn’t take long to meet the goal because of all the people who know Sam. Several people in Athens who just knew him from the one year he’s been here contributed.”

Having to be basically confined to his home means Graham can’t be around his football team. Thanks to the internet, Graham is able to break down video for Gross.

“My dad was a football coach. Football has always been a big part of my life,” Graham said. “Not being around my team or having a game to get ready for each week is about to kill me.”

Graham did visit Athens on Aug. 25, the night of the Golden Eagles’ preseason game with Russellville. He spoke to the team before the game and watched the first half before heading home.

“I don’t know about the players, but there were few dry eyes among the coaches,” Gross said. “There’s a huge void without him here. We’re all looking forward to the day when he’s back with us.”

If you would like to contribute, go to youcaring.com/amygraham-829634

I was diagnosed in 2006 with multiple sclerosis, the only symptoms at that time were falling and legs hurting and moving all the time. I remember no symptoms at all until last year. I went into full seizure mode, I was put on Avonex. I had the symptoms of that medication every day for 13 weeks, I mean I was so sick every day. I stopped that medication and a few days later I was back to my normal self. Then a few weeks later I started having attacks every week and I was really bad. It's like one long attack every day. My upstairs neighbors cause me great anxiety every day. I have gotten a new neurologist and she started me on the Copaxone and I didn't know what to expect, I knew I hurt from when I wake up until I go to sleep.I lost touch with reality.I started on Health Herbal Clinic multiple sclerosis Disease Herbal formula in June 2017, i read alot of positive reviews from patients here in the United States on their success rate treating multiple sclerosis through their Herbal formula and i immediately started on the treatment. Just 7 weeks into the Herbal formula treatment I had great improvements with my Vision and coordination, my stiffed, rigid muscle had succumbed. I am unbelievably back on my feet again, this is a breakthrough for all multiple sclerosis sufferers, visit Health Herbal Clinic official website www. healthherbalclinic. net or email info@ healthherbalclinic. net.