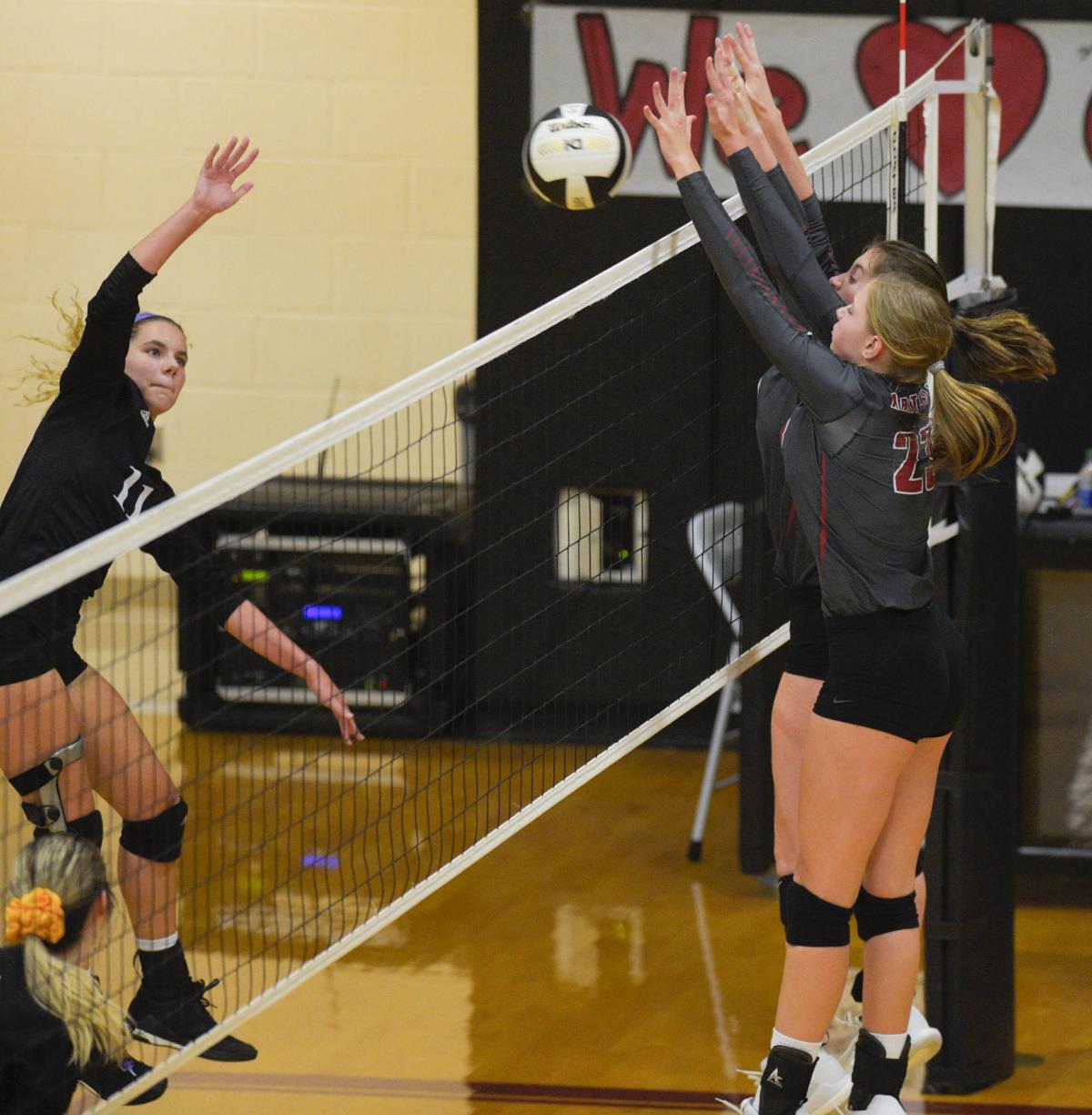 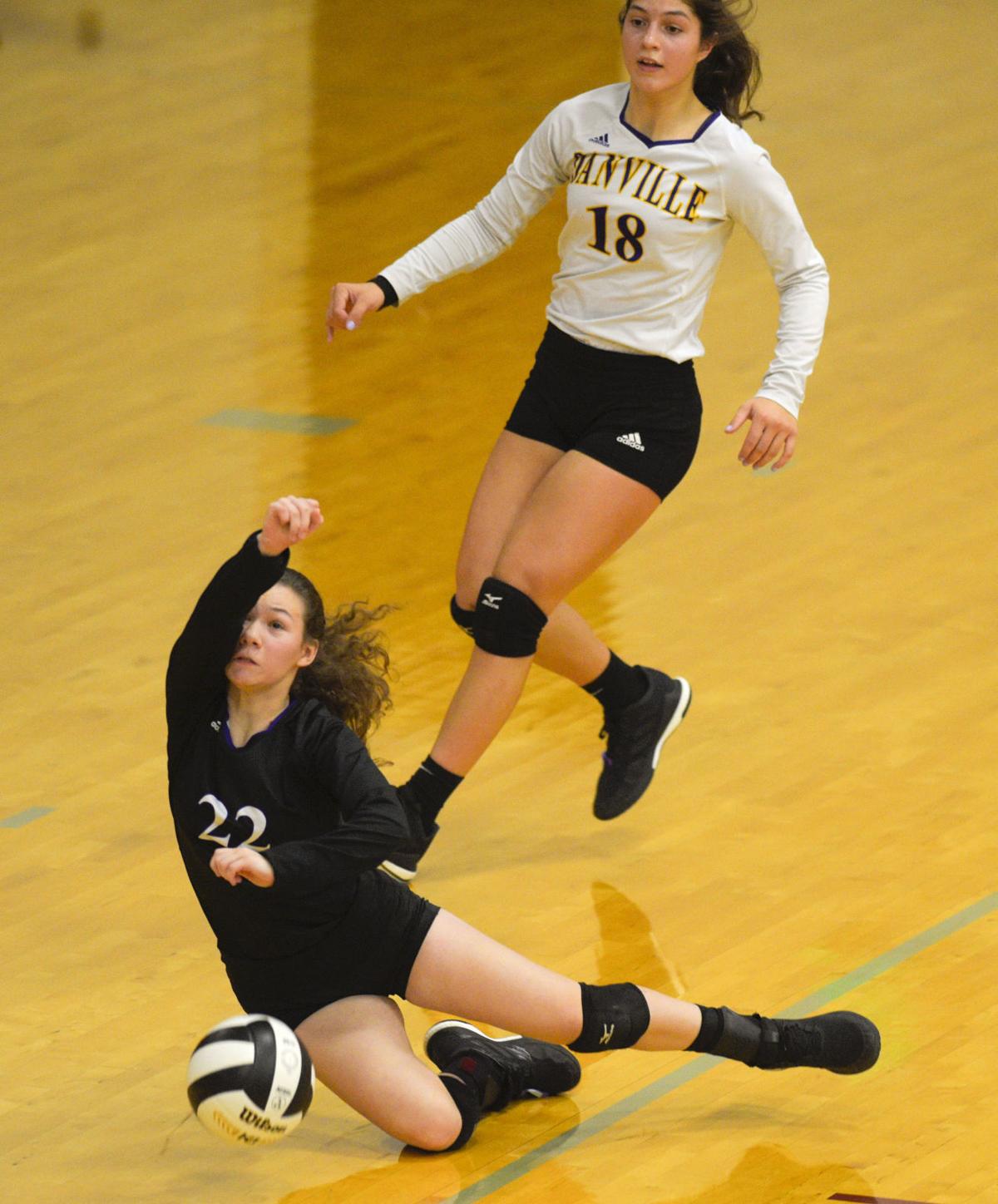 Danville volleyball player Emily Lacy takes a spill as she dives for the ball in a match with Hartselle on Tuesday. Coming to assist is Auidrey Marshall (18). [JOHN GODBEY/DECATUR DAILY]

Danville volleyball player Emily Lacy takes a spill as she dives for the ball in a match with Hartselle on Tuesday. Coming to assist is Auidrey Marshall (18). [JOHN GODBEY/DECATUR DAILY]

HARTSELLE — It was senior night Tuesday evening at Hartselle High School, and the Lady Tigers said goodbye to some special ladies, while simultaneously sending them off in style.

The Tigers hosted two fellow Morgan County teams that are both ranked in the top five of their respective classes, Class 4A No. 5 Priceville and Class 3A No. 2 Danville.

It was a perfect way to cap senior night for seniors Hailey Holshouser, Tori Hughes, Lillyanna Cartee and Jessica Jarrett.

“It’s always nice to sweep two very good teams, and two county teams at that,” said Hartselle head coach Tanya Lybarger. “I’m really going to miss this group. From my managers to the players, they’re going to be really hard to replace.”

Cartee led the way for Hartselle with 14 kills and 14 digs. Holshouser finished with 24 digs and 10 kills.

Beating two top five teams, regardless of class, is an accomplishment. However, Lybarger doesn’t want it to go to their heads.

“Those are really good teams, but there’s still a big difference between 6A and 4A/3A,” Lybarger said. “We have tough teams just in our area, so we can’t get overconfident from wins like this.”

Still, Lybarger was happy to see her team play mistake free volleyball for the majority of the sets, and make plays when they needed to.

“I was happy to see us not make many mistakes and capitalize on mistakes they made,” she said. “Even when we got down in the one set to Danville, our girls never panicked.”

Danville bounced back in the second match against Priceville. The Lady Hawks swept the Bulldogs 2-0 in two close sets of 26-24 and 25-25.

A big reason for the Hawks, win was Faith Parker

Parker came off the bench for Danville and was explosive in the process.

In the first set she delivered two of the Hawks' final four points to help them win 26-24. In the second set, she came in with Danville trailing 20-19. With a couple kills and a key block she helped Danville score their second come-from-behind victory.

“She’s not always someone that comes off the bench. We switch it up, and tonight that’s just the way it worked out,” said Danville head coach Megan Aldridge. “She’s a second-year varsity player, and she knows exactly what to do. She adds so much to our offense, and that showed tonight.”

Being swept by Hartselle wasn’t the best way to start a tri-match, but bouncing back to sweep Priceville helped alleviate that sting.

“This team is really good about not letting negative things continue to affect them,” Aldridge said. “They know how to take it one point at a time, one set at a time.”