Bob Godsey: “Winning that state championship was like discovering the missing piece of a puzzle. It was not just for the football program. It was for all the great athletic tradition at Hartselle. It was an honor to be a part of it.” [COURTESY OF JIM MEADOWS] 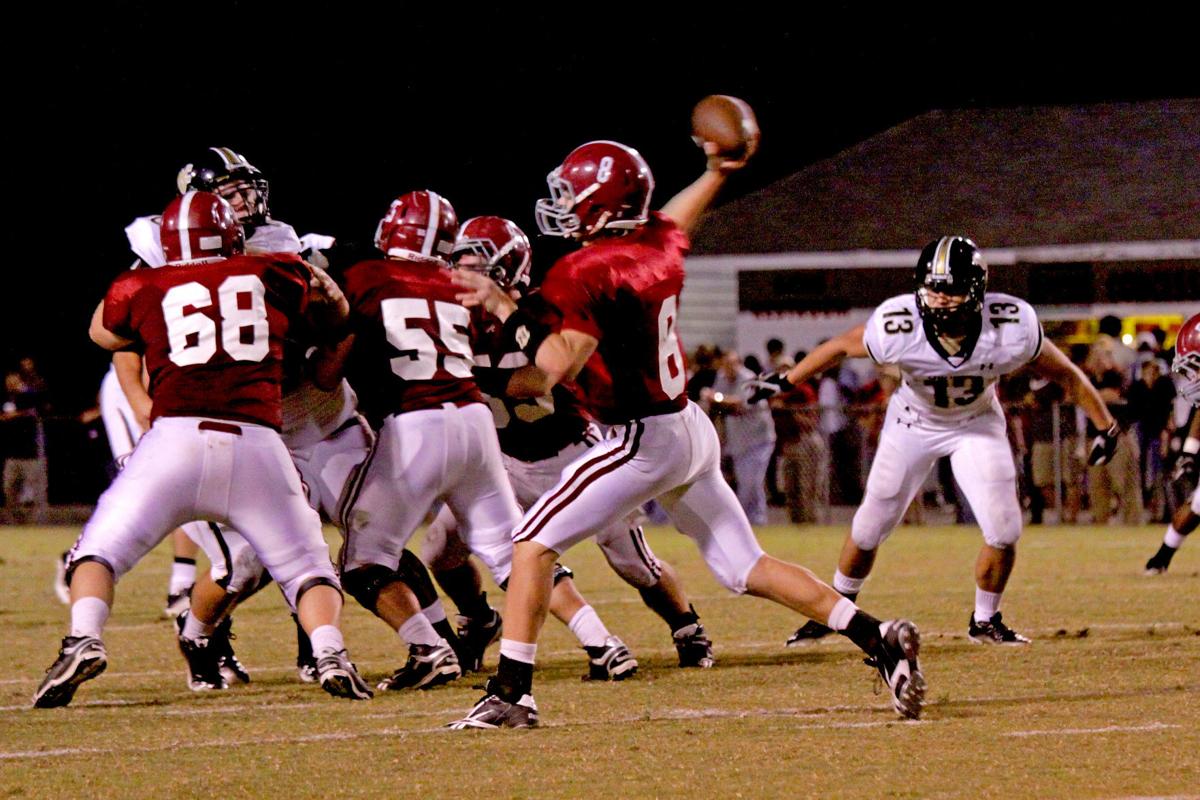 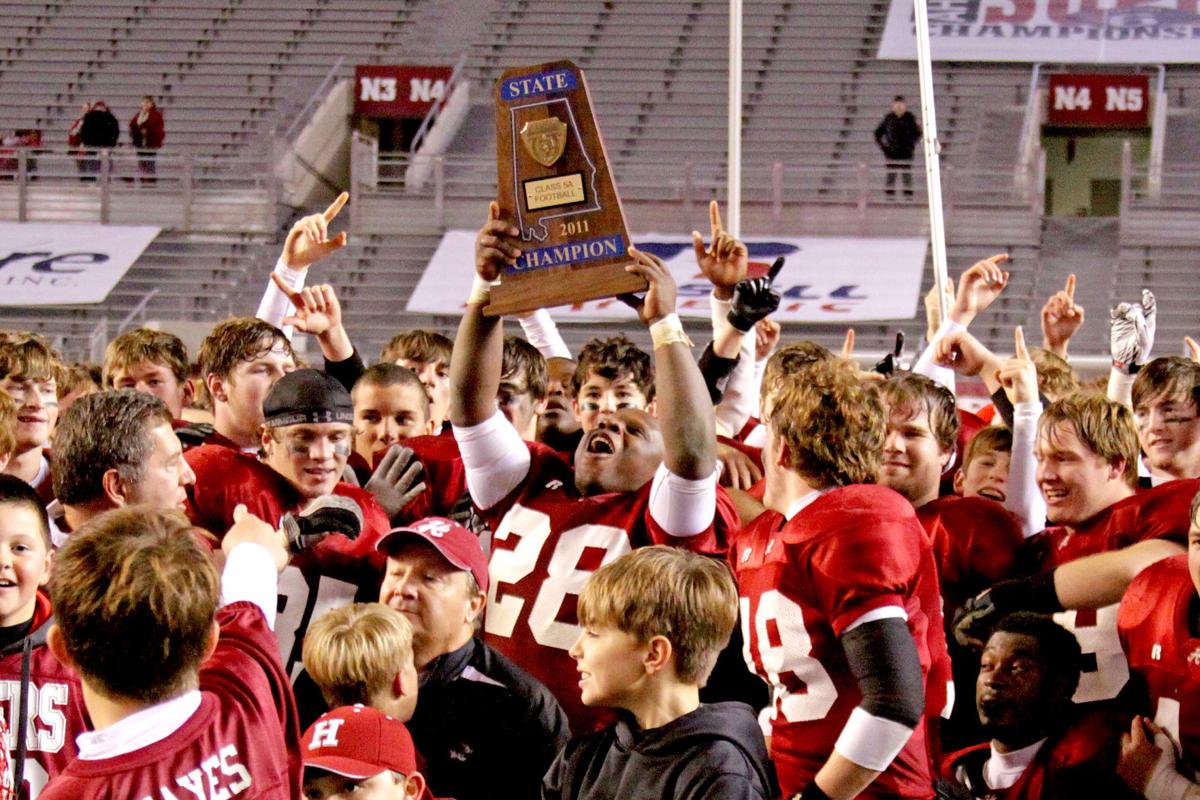 Jordan Orr holds up the state championship trophy in 2011 after Hartselle beat Vigor in Tuscaloosa in the Class 5A championship game. [COURTESY OF JIM MEADOWS]

Bob Godsey: “Winning that state championship was like discovering the missing piece of a puzzle. It was not just for the football program. It was for all the great athletic tradition at Hartselle. It was an honor to be a part of it.” [COURTESY OF JIM MEADOWS]

Jordan Orr holds up the state championship trophy in 2011 after Hartselle beat Vigor in Tuscaloosa in the Class 5A championship game. [COURTESY OF JIM MEADOWS]

Over the years, the football field at Hartselle’s J.P. Cain Stadium has been the home of hard-fought games, great players, top-notch coaching and some of the best traditions in high school sports.

The one thing that had been lacking was a football state championship. That drought ended in 2011.

The 10th anniversary of that 15-0 championship season will be marked Friday night when Hartselle entertains Russellville.

While most of the attention will be on the two undefeated teams playing, the third team present, which did what the two teams on the field aspire to do this season, will be honored.

It will be a special reunion of players, coaches, families and friends, including head coach Bob Godsey, who is returning for his first game back at Hartselle since his final game in 2018.

“It’s going to mean so much to see these young men 10 years later,” Godsey said. “That team was really close and they still are. I’ve seen that at a lot of the weddings I’ve been invited to over the years. They did something that Hartselle had never done before.

“Winning that state championship was like discovering the missing piece of a puzzle. It was not just for the football program. It was for all the great athletic tradition at Hartselle. It was an honor to be a part of it.”

The story of the 2011 season really goes back to the 2010 season. After knocking on the door to the Class 5A championship game three times, all signs pointed to 2010 being the year Hartselle would crash through. Those dreams died in a heart-breaking overtime loss in the semifinals to Briarwood Christian, 24-21.

“We thought we had a chance to be good in 2011,” Godsey said. “There were a lot of good players coming back, but a lot of them were unproven. We knew we had a really good defense. It all depended on how quick the offense came along.”

One of those unproven players was junior Deacon Aldridge. He had the task of replacing first-team All-State quarterback Will Lang.

“I was raw and still learning the quarterback position in 2011,” Aldridge said. “Not only that, but I had to learn how to lead a team.”

Before the season began, senior fullback Blaze Lawrimore said there was a team meeting where the course was set for what was ahead.

“I remember I think it was Will Swann (senior, center) who said that we are going to do whatever it takes to get to the state championship game,” Lawrimore said. “He said for the next 15 weeks we are going to live, breathe and eat nothing but football.”

Hartselle opened the season with shutout wins over Athens, Brewer and Hayden. Then came a 17-3 win at home over region rival Walker. The game was 3-3 at halftime. The next game was at home vs. old rival Decatur.

“Decatur is always a big game for Hartselle,” Godsey said. “That year they were 6A and we were 5A. It was a good measuring stick for where we wanted to be.”

The game was tied at 21-21 after three quarters. Running back Blake Slayton scored the game-winning touchdown on a four-yard run.

“After Decatur we knew we had a salty bunch of guys,” Aldridge said. “Our offense came alive and started clicking.”

The Tigers needed another fourth-quarter touchdown from Slayton to break a tie with Cullman for a 20-13 victory in the ninth game of the season.

Hartselle rolled into the second round of the playoffs at Pinson Valley to face another big test. Gavin Marsh’s 19-yard field goal with four seconds left produced a 22-21 win. A key play in the final drive was a 34-yard pass from Aldridge to Jesten Thompson to the Pinson Valley 6.

“I just threw the ball up and somehow Jesten caught it,” Aldridge said. “I still don’t know how he did it.”

After a 17-7 road win at Center Point, Hartselle was back home against Briarwood. It was a rematch on the same field where the Lions had knocked off the Tigers in overtime a year earlier.

“I had a fumble late in the 2010 games against Briarwood,” Hartselle’s Jordan Orr said. “I blamed myself for losing that game. I never dreamed that I would get another chance against that team and on the same field.”

The championship game was set for Thursday, Dec. 1 at Bryant-Denny Stadium in Tuscaloosa. Vigor reached the finals after winning at Hueytown, 20-7. The Hueytown quarterback was Jameis Winston, who now throws touchdown passes for the New Orleans Saints.

“When I first watched the film on Vigor, I thought ‘wow!’ They were huge and could run,” Godsey said. “Still to this day they were the most impressive high school football team I’ve ever seen on film. I think they had like four guys that played in the NFL.”

When the Hartselle team buses arrived at Bryant-Denny, they were mobbed by Hartselle fans. By luck of the draw, Hartselle was the home team and got to dress in the Alabama locker room.

“I remember walking out for warmups. We had five times the fans Vigor did,” Aldridge said. “I felt the chills going down my back.”

Swann walked out knowing that he and his buddies in the offensive line — Jamison Maxwell, Christian Youngblood, Dylan Thompson and Chris Brown — literally faced a huge challenge.

“I walked out for warmups and my Dad was standing by the fence,” Swann said. “I went over to him to say hello. He said ‘Son play hard and try not to get hurt. These guys are huge.’”

Godsey altered his plan a little bit for this game. He usually wanted the ball first so his team could have the chance to score first. Against Vigor, he wanted to kickoff and turn the game into a battle of field position.

During Hartselle’s first possession, it looked like the Tigers might have to alter the game plan even more. Aldridge got his ankle rolled and suffered a high sprain.

“I heard a loud pop and could feel the pain shoot up and down my leg,” Aldridge said.

The first half ended with Vigor up 3-0.

“We walked in the locker room and Coach Godsey said ‘If they don’t score in the second half, we win the game,’” Orr said. “I knew then we were going to win it, because I knew they wouldn’t score. We had already got inside their heads. They didn’t know what to do.”

Aldridge heard none of the halftime talk. He was in the back of the locker room being attended to by Alabama trainers and Hartselle’s trainers from Encore.

“They were trying to fit a brace on my ankle,” Aldridge said. “There was no way I wasn’t going to play with or without a brace.”

With Aldridge back on the field, Hartselle took the second half kickoff and marched down the field to tie the game at 3-3 on Marsh’s 38-yard field goal. His 47-yarder with 1:46 left put the Tigers ahead. Slayton’s 12-yard run with 42 seconds remaining sealed the victory.

“I remember the look on Coach Godsey’s face after we dumped the Gatorade on him. It was like it washed away the monkey on his back,” Swann said.

Orr calls the championship a blessing that made his move from Danville to Hartselle pay off.

“I grew up playing (youth) football with these guys,” Orr said. “They wanted me to come and play with them at Hartselle. I’ll never forget the experience. I think about it every day.”

Aldridge could barely walk when the game ended.

“To get through all the obstacles we went through, especially in the state championship game, still seems surreal,” Aldridge said. “It feels like it was a lifetime ago.”

Orr and Swann were both first-team All-State selections. The middle linebacker and center had gone head to head against each other in every practice.

“Jordan made me what I became as a football player,” Swann said. “I had to get better just to survive going against him every day.”

“Every kid that plays football dreams of playing for a state championship team,” Lawrimore said. “I know I did and then I really got to do it.”

Today, Swann is a pharmacist and lives in Hartselle. Orr lives in Decatur. Aldridge lives in Huntsville and works for the government. Lawrimore lives in Florence and coaches football at Muscle Shoals.

“I got a degree in sports management, but decided I wanted to do something else,” Lawrimore said. “I thought back to what was the most enjoyable time of my life and that was playing high school football.

“Being a coach at Muscle Shoals has given me a new insight on the behind the scenes things that coaches go through to give their players the opportunity to succeed. I see how fortunate we were to have the coaching staff we had at Hartselle.”

“It meant so much to so many people,” Godsey said. “We always had the greatest support. That season there was a tree by the old high school that the students would roll with toilet paper after each win. It was completely covered after the last game.

“We had come so close since 2006. Hartselle played for state championships twice in the ‘80s. Finally getting that state championship trophy was just so special for the community. Weeks and months after we won it, I had people coming up to me telling how much it meant to them and their families and friends.”

When Godsey gathers with his players, coaches and fans Friday there will be talk about the team’s knack for coming through in a season filled with big moments.

“One of my favorite sayings has always been ‘find a way,’ and these guys did it every day for 15 weeks,” Godsey said. “Being a part of that was an incredible experience.”