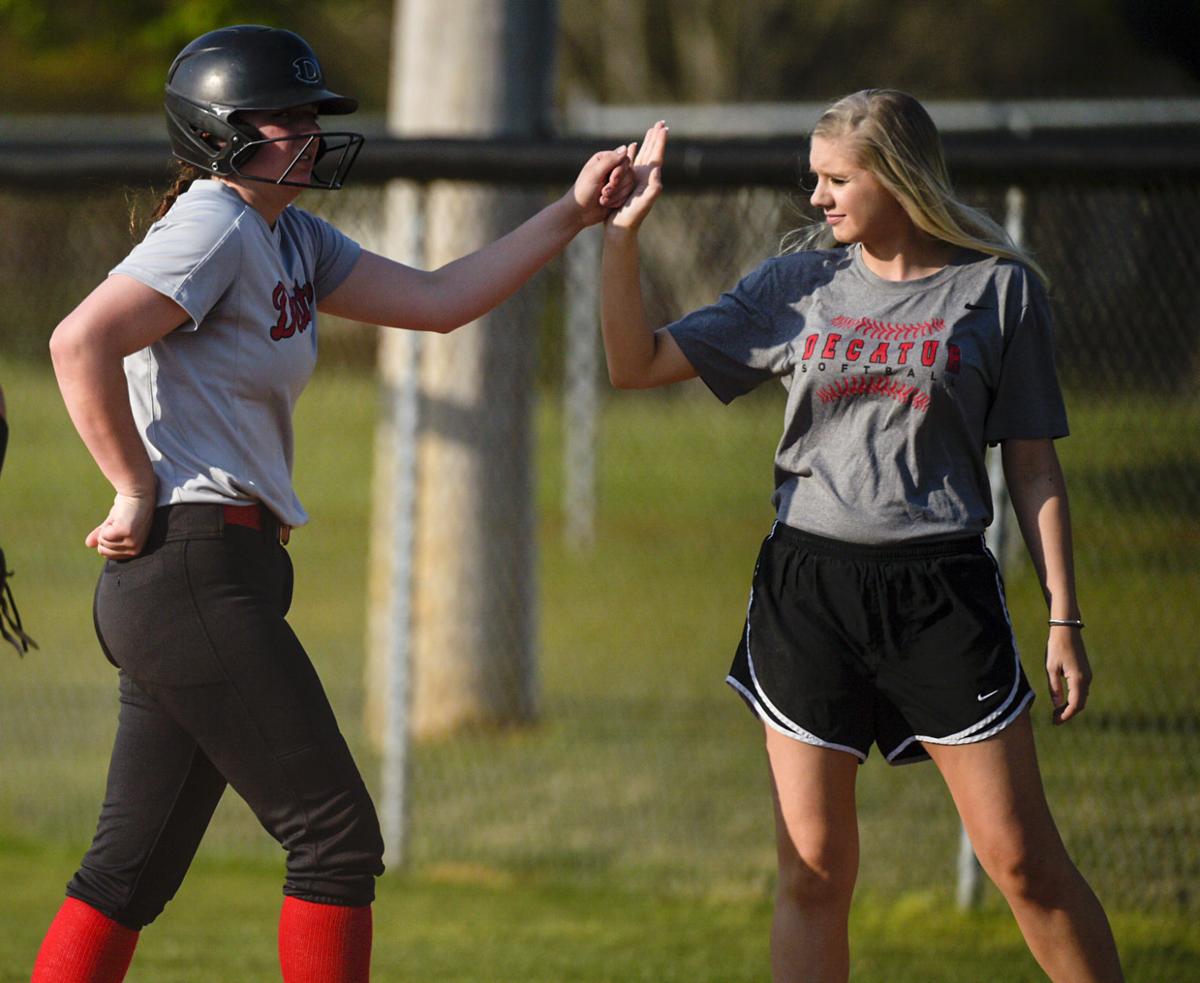 Decatur's Madison Murphy gets a high-five from coach Braeden Netherton after hitting a single during the game against Cullman in Decatur on Tuesday. [JERONIMO NISA/DECATUR DAILY] 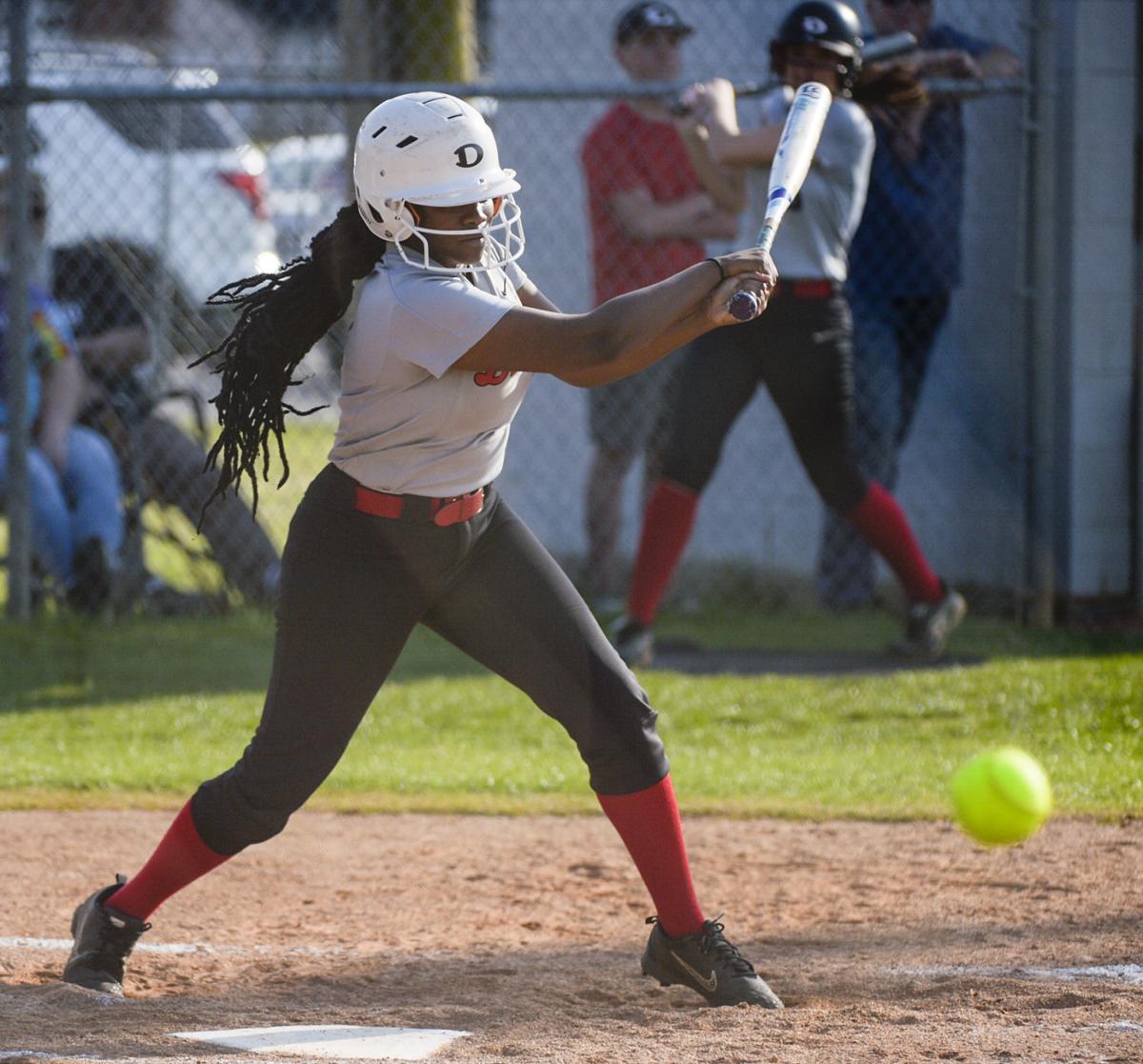 Decatur's Peyton Moseley connects with the ball during the game against Cullman in Decatur on Tuesday. [JERONIMO NISA/DECATUR DAILY]

Decatur's Madison Murphy gets a high-five from coach Braeden Netherton after hitting a single during the game against Cullman in Decatur on Tuesday. [JERONIMO NISA/DECATUR DAILY]

Decatur's Peyton Moseley connects with the ball during the game against Cullman in Decatur on Tuesday. [JERONIMO NISA/DECATUR DAILY]

Kenley Hilleary was perfect for Austin on Tuesday, retiring all 21 Florence hitters in a 4-0 area win in high school softball.

Lawren Hayes and Kinsley Higdon each had one hit.

Lilli Cain and Anna Carder drove in two runs for the Golden Eagles, while Morgan Stiles homered, doubled and drove in a run. Molly Gilbert and Haley Waggoner each had two hits and one RBI.

Emily Simon allowed one unearned run on one hit over five innings to earn the win. She finished with eight strikeouts.

Cullman 4, Decatur 1: Makalyn Cowley had a hit and an RBI for Decatur.

Madison Murphy added one hit for the Red Raiders. Savannah Davis and Emma Claire Wilson each homered for Cullman.

Destiny Burns tripled and drove in two runs for the Trojans and Brooke Blakely had two hits and one RBI. Cana Vining struck out 14 over seven innings to pick up the win.

East Lawrence 8-6, Tanner 1-1: Mattie Rae Gillespie allowed one run on three hits in five innings to pick up the win for East Lawrence in Game 1.

Taryn Hall, Aubrey Oliver and Paisley Rain Thatch each had a hit for Tanner.

Ivee Jenkins drove in two runs for East Lawrence in Game 2. Emma Coan had two hits and one RBI, and Makayla Austin drove in a run. Tori Spears pitched five innings for the win.

Hall and Bryonna Castrejon had two hits each for Tanner.

Ardmore 17-15, Lee-Huntsville 0-0: Ella Singletary tossed a no-hitter for the Tigers in one game and Addy Atchley picked up the win in the other.

Bo Riley and AG King each homered for Ardmore.

Alyssa Harwell had two hits for the Red Devils, while Abbie Broadway added a single.

Larissa Preuitt had two hits for the Tigers and Lillyanna Cartee had one hit.

Priceville 6, Randolph 5: Priceville scored three runs in the bottom of the fifth inning and held off a seventh-inning rally by Randolph to pick up an area win.

Trailing 2-0 after three innings, Priceville scored three times in the fourth to take a 3-2 lead and three more times in the fifth to push the lead to 6-3. Randolph scored twice in the seventh inning but could not complete the comeback.

Cole Smith led Priceville with a hit and two RBIs. Mason Mann had three hits, including a pair of doubles, and an RBI and Zack Chaney had two hits and one RBI.

Saxon Sample had two hits and three RBIs for the Eagles, and Nash Ripped doubled, singled and drove in two runs. Tyler Founds and Clay Smith had one hit and one RBI each.

Cole O'Brien struck out 11 over four innings to earn the win. He allowed one run on five hits with one walk.

Wil Terry had two hits and an RBI for Hatton.

West Limestone 4, Brooks 0: Colin Patterson and Logan Martin combined to strike out 16 in a three-hit shutout for West Limestone.

Patterson struck out 14 over 5 2/3 innings for the win, allowing a pair of hits. Martin pitched the final 1 1/3 innings, surrendering just one hit with three strikeouts.

Ryan Britt led the West Limestone offense with three hits, including a double, and two RBIs. Cooper Phillips had two hits and two RBIs and Patterson added a pair of singles.

Coleman Garner tripled, singled and drove in two runs for the Eagles, while Neal Blaxton added a hit and two RBIs. Zac Shelton singled twice and drove in a run.

Shelton pitched 1 2/3 innings of relief for the win, allowing no runs on two hits with two strikeouts.

Falkville 7-11, Cold Springs 2-3: Caden Burnett and Wyatt Tomlin had a pair of RBIs each for Falkville in Game 1.

Colton Hooper had three hits, including a double, and pitched seven innings to earn the win. Hooper allowed two earned runs on six hits while striking out 13.

Tomlin had three hits and two RBIs in Game 2. Dawson Fowler had three hits, including two doubles, and an RBI, and Burnett had two singles.

Tomlin pitched one inning to earn the win, allowing one earned run while striking out the side.

AJ Davis homered and drove in two runs for the Lions. Ben Frasier had two hits and two RBIs.

Cody Graviett, Connor Abernathy and Eli Hiebert each had a hit for Athens Bible.

Bob Jones 12, Austin 5: Cameron Bracken homered and drove in a pair of runs for Austin.

Caleb Beard had two hits, including a double, and two RBIs, while Logan Beasley added a pair of singles.

Max Soliz had three hits, one a grand slam, and six RBIs for Bob Jones. Slate Alford homered and drove in two runs.

Cameron Franklin had a double for the Indians, while Jojo Thallas and Logan Wales added one single each.

Pairs of Orr-Bowman (8-0), Power-Terry (8-0) and Suggs-McLeod (8-1) picked up points to round out the sweep for the Eagles, who finished the regular season unbeaten in Class 1A-3A, Section 5 play.

The boys and girls teams will compete in the 1A-3A, Section 5 tournament next Monday and Tuesday at the Huntsville Tennis Center.

A Hartselle own goal accounted for Decatur's final score. The Red Raiders play at Grissom on Friday.