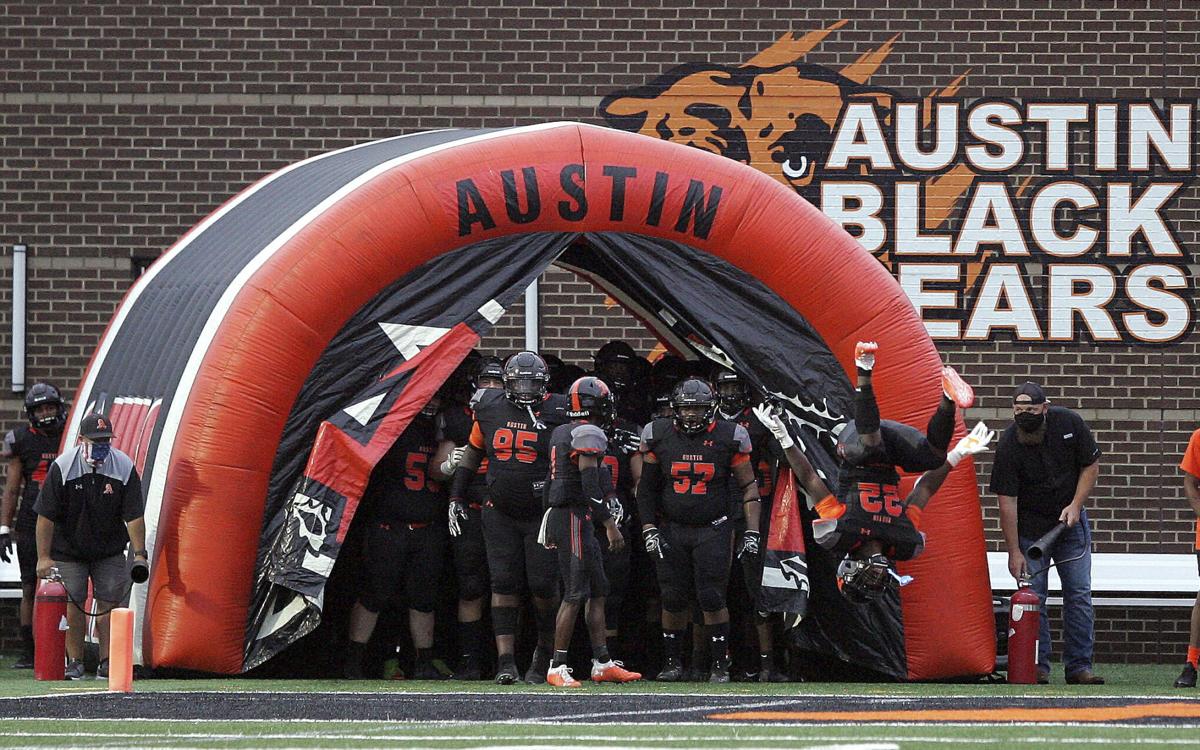 Austin's Jevon Jackson (22) will have another opportunity to excite the crowd with a back flip Friday night when the Black Bears return home for the first time in five weeks. [JERONIMO NISA/DECATUR DAILY] 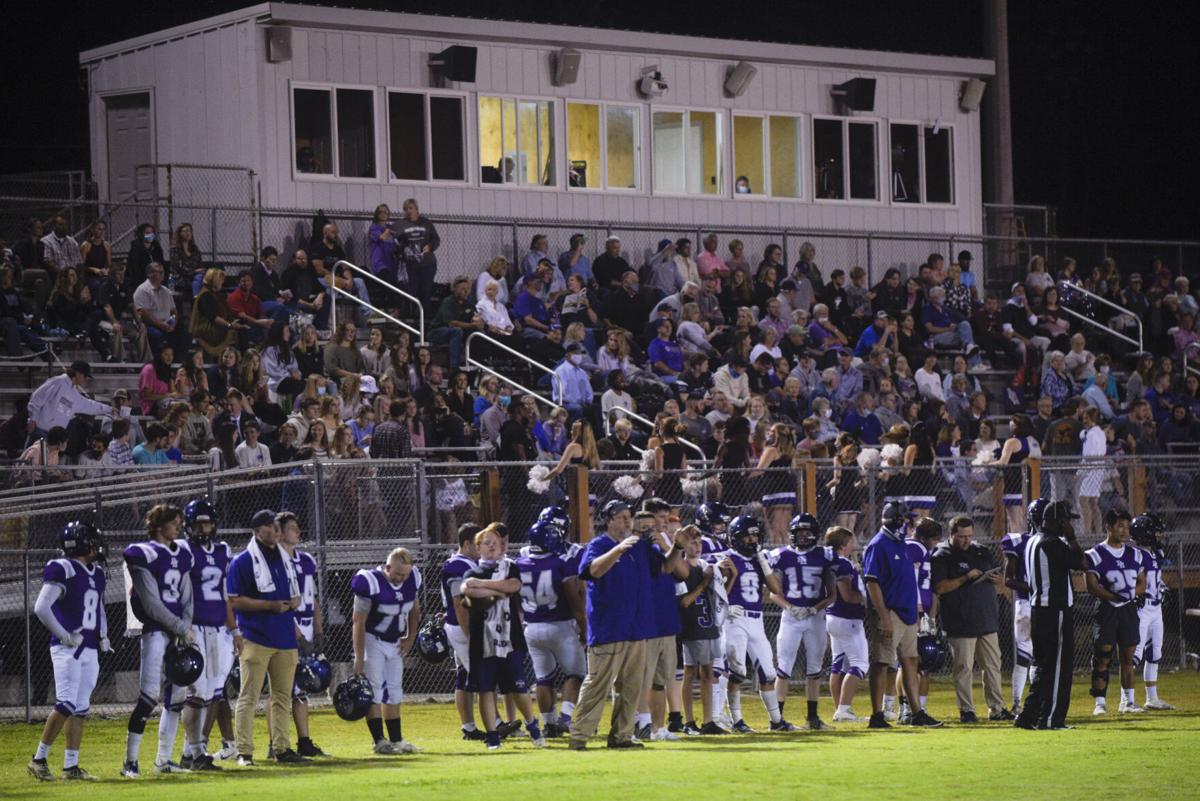 Rebels Stadium at West Morgan will be the home field again Friday night for the Decatur Heritage Eagles when they host Cherokee. [JOHN GODBEY/DECATUR DAILY]

Austin's Jevon Jackson (22) will have another opportunity to excite the crowd with a back flip Friday night when the Black Bears return home for the first time in five weeks. [JERONIMO NISA/DECATUR DAILY]

Rebels Stadium at West Morgan will be the home field again Friday night for the Decatur Heritage Eagles when they host Cherokee. [JOHN GODBEY/DECATUR DAILY]

Where: Milton Frank Stadium in Huntsville

The skinny: The Red Raiders picked up their first win last week over Hazel Green, 28-0. Columbia has not won a game since 2015.

Where: M.T. Newman Stadium in Clements

What: Class 3A Region 8 contest

The skinny: Both teams have struggled on offense. Danville has scored 91 points, but 77 came in wins over Brewer and Elkmont. … Clements has scored 153 points, but given up 262.

What: Class 7A Region 4 contest

The skinny: The transition to Class 7A has not been easy for the Aggies. Albertville was just moved up from 5A to 6A in 2012. Albertville tight end/defensive end Trinity Bell is a Tennessee commitment. … No. 8 Austin is rolling along while averaging 37 points a game on offense while giving up 16 points on defense.

The skinny: Hartselle’s win over Muscle Shoals last week was its biggest of the season. Moore called it a program changer. The Tigers now have a chance to finish with seven wins after winning just four last year. They also can possibly get a No. 2 seed, which would mean a first-round home game in the playoffs. … Hartselle is 10-0 all-time vs. Hazel Green.

Where: Golden Eagle Stadium in Athens

Coaches: Cody Gross (29-22) is in his fifth season at Athens. Oscar Glasscock (12-7) is in his second season at Cullman.

The skinny: With Hartselle’s upset of Muscle Shoals a region championship is now a distinct possibility for the Golden Eagles. … Since the Muscle Shoals game, the Golden Eagles’ rushing attack has been almost unstoppable with running back Jaylen Gilbert. … The only blemish on Cullman’s record is a 21-6 loss to Class 2A power Mars Hill. … Athens leads the series 32-23-1.

Where: Rebel Stadium in Trinity

What: Class 1A Region 8 contest

Last meeting: This is their first meeting.

The skinny: Decatur Heritage has won six straight while outscoring opponents 291-111. The Eagles the No. 6-ranked team in Class 1A.

What: Class 4A Region 8 contest

The skinny: After a tough region loss at home to Central, 20-14, the Bulldogs need a win to keep their playoff hopes alive. … Since dropping a 33-14 loss to West Limestone, Deshler has outscored four region opponents 128-14.

What: Class 4A Region 8 contest

Last meeting: This is their first meeting

The skinny: The playoffs are out of the picture for both teams. It’s an opportunity for a young West Morgan team to gain more experience.

Where: James Tucker Stadium in Florette

The skinny: A young Brewer team has taken its lumps this season. Fairview, which is ranked No. 10 in 5A, will be a challenge. The Aggies’ lone loss was to No. 5 Guntersville, 48-12.

What: Class 2A Region 7 contest

Last meeting: This is their first meeting.

The skinny: Falkville is ranked No. 8 in the state in Class 2A. The Blue Devils have outscored opponents, 312-27.

Where: Red Devil Stadium in Moulton

Coaches: Rich Dutton (36-54) is in his ninth season at Lawrence County. Harold Wells (2-5) is in his first season at Mae Jemison.

The skinny: These two teams are tied for third place in Region 8. This game could decide the playoff opponents for both teams. … Lawrence County quarterback Brody Sparks has thrown for 1,435 yards and 16 touchdowns.

The skinny: Since starting the season 3-0 the Tigers have lost three of their last four. Lee has forfeited two of its last three games.

Where: Tigers Stadium in Russellville

The skinny: The Indians have been on a hot streak since their season opening loss to Mars Hill, winning six in a row. The winner of this game will be region champs. … This will be old school football at its finest featuring two physical teams that like to run the ball and play defense.

Where: Pirate Field in Rogers

What: Class 4A Region 8 Contest

The skinny: A West Limestone win locks up the Wildcat’s first region title since 1998.

What: Class 2A Region 8 contest

The skinny: If Hatton wins out, the Hornets still have a slim chance at making the playoffs. The Hornets are 6-0 all-time against Tharptown.

What: Class 1A Region 8 contest

The skinny: The winner of this game locks up second place in the region behind champion Decatur Heritage. The difference between second and third is a home game in the first round of the playoffs vs. a road trip. R.A. Hubbard is 8-0 all-time vs. Waterloo