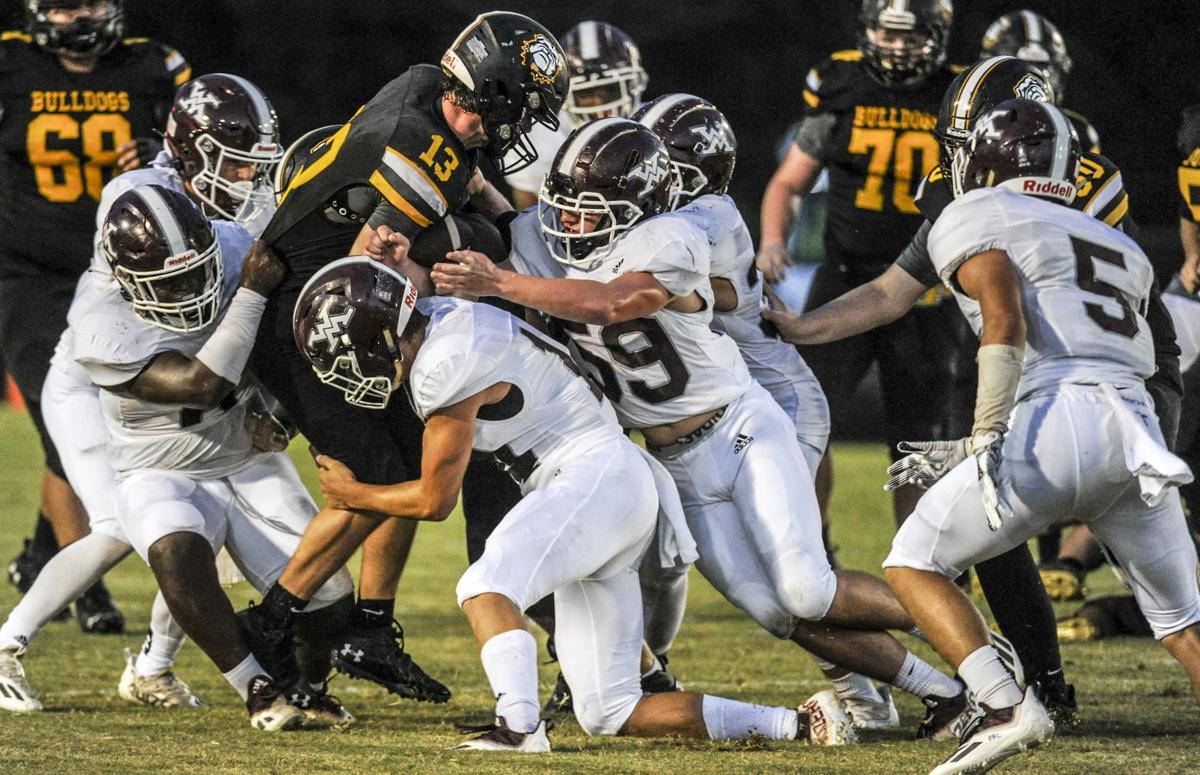 West Morgan defenders swarm Priceville's Xander Gaines (13) during Pricevile's 24-7 win on Sept. 3. With three weeks left in region play, both teams are in the hunt for a spot in the playoffs representing Class 4A, Region 8. [JERONIMO NISA/DECATUR DAILY] 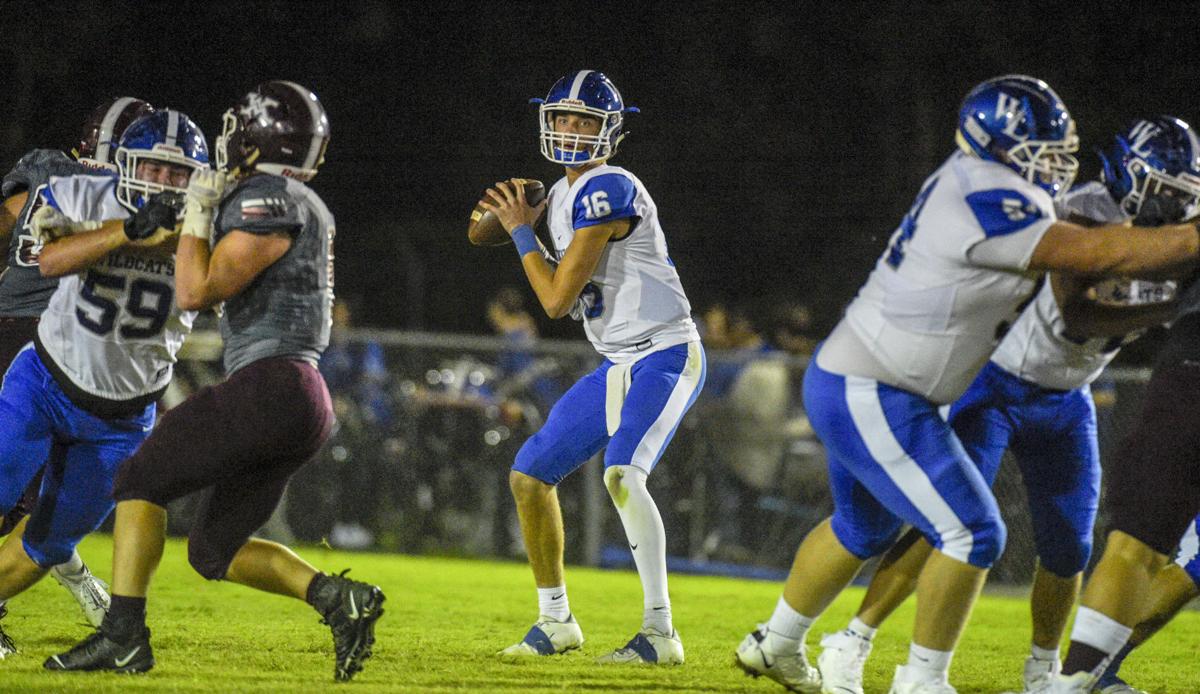 West Morgan defenders swarm Priceville's Xander Gaines (13) during Pricevile's 24-7 win on Sept. 3. With three weeks left in region play, both teams are in the hunt for a spot in the playoffs representing Class 4A, Region 8. [JERONIMO NISA/DECATUR DAILY]

There are four weeks left in the high school football season.

The next three weeks are devoted to playing region games, which decide the four teams that advance to the playoffs.

While the playoff picture is starting to come into focus for several regions, that’s not the case with Class 4A, Region 8. It seems to become more jumbled each week.

Five teams — Brooks (4-0 region record), Priceville (3-1), Central (3-1), West Limestone (2-2) and West Morgan (2-2) — are in the hunt for the four playoff spots. Deshler, which has been the region kingpin for decades, looks to only have a spoiler role for the rest of this season.

Two of the teams are in this week's state rankings. Brooks, which beat West Limestone, 27-20, last Friday, is No. 6. West Limestone dropped from No. 7 to No. 10. Central, which was undefeated before losing to West Morgan, 27-24, last Friday, dropped out of the Top 10 after being No. 8 last week.

“It’s a dogfight each week in this region,” Priceville coach Chris Foster said. “You better be ready to accept the challenge.”

The history of Class 4A, Region 8 goes back to 2000 when it was formed under the current format. Brooks, Central, Deshler and Wilson were in the original group of eight. Other schools have come and gone through the different reclassifications held every two years.

West Limestone and Priceville both joined the party in 2010. West Limestone moved up from Class 3A. Priceville moved over from Class 4A, Region 7, which had schools more to the east of Morgan County. The Bulldogs moved back and forth from Region 7 and Region 8 three times over the next decade.

In 2020, Priceville and West Morgan both moved west to Region 8 from Region 7 to give the region its present look. West Morgan had just moved up from 3A to 4A in 2018.

“There are a lot of really good coaches in this region,” West Limestone head coach Shelby Davis said. “They like a tough, physical brand of football. For the most part its pound the ball with the run.”

Of the eight teams in the region, Brooks is the only one that is more pass-oriented and prefers the spread formation

“When you have a quarterback as talented as Kyler Murks and a receiver like Knute Woods, you can win doing that in this region,” Davis said. “Those two are special players that will have the chance to play at the next level.”

West Limestone also throws the ball with junior quarterback Colin Patterson, but it’s used more as a way to set up the run. Teams like Priceville, Central and West Morgan stick to the ground attack.

“I think it depends a lot on your personal,” West Morgan coach Drew Phillips said. “We’re heavy run because that’s what we believe in. We have to establish the run to be successful.”

Phillips is in his first season at West Morgan. He knew a lot about Region 8 before he came to Trinity. He’s a 2005 graduate of Brooks. Harlon Hill Field at Brooks is named after his grandfather, who served as coach and principal at the school after a great career in the NFL with the Chicago Bears.

West Morgan visits Brooks on Friday. It will be Phillips first opportunity to be on the opposing sideline.

“That’s going to be exciting,” Phillips said. “A lot of my blood family lives there, but at the end of the day this trip is about our football team and being ready for the challenge.”

West Morgan helped jumble the puzzle that is Region 8 last week with its win at home over Central.

Rebels’ running back Jalen Fletcher had 28 carries for 146 yards and two touchdowns. Quarterback Braxton Peters passed for a touchdown and ran for another while rushing for 109 yards.

That score may have surprised some people, but West Morgan is one of the most improved teams in the region. The Rebels opened the season with a 34-28 win over Good Hope. Last Friday, Good Hope beat traditional 4A powerhouse Etowah, 20-19.

Priceville travels to Central on Friday. The Bulldogs are winless vs. Central in seven previous meetings.

The Priceville-Central game should be one of the quickest games this week. Both teams are run-run-run. In an era of throwing the ball, these teams stick to the ground attack. The defenses know what to expect.

“We usually see eight to 10 defenders in the box,” Foster said. “It will be five or six guys in the line. We see the front from the defense and then adjust our plays and blocking scheme.

“They know what we want to do and we know what they are trying to do. It comes down to which team can adjust the quickest.”

Running back Mason Cartee is Priceville’s No. 1 offensive weapon. He’s rushed 134 times for 1,055 yards and 16 touchdowns.

To show the contrast between the run and pass for Priceville, there’s starting quarterback Jackson Prickett. He’s been called on to pass the ball just 54 times in six games. He’s completed 32 for 294 yards and two touchdowns.

West Limestone travels to Wilson on Friday. The Wildcats are still smarting from the missed opportunity vs. Brooks last Friday.

“Brooks’ offense is hard for us to simulate in practice,” Davis said. “They are the only team in the region that likes to throw the ball as much as they do. The rest of the region is just tough, gritty teams.”

Davis’ Wildcats are led by running back Dakota Wilson with 624 yards and four touchdowns on 100 carries. Quarterback Colin Patterson has completed 75 of 107 attempts for 899 yards and seven touchdowns.

West Limestone ran the table last season with a 7-0 region record that included wins at Central and Brooks. The Wildcats then won three games in the playoffs to finish 11-2.

Region 8 has enjoyed great success in the playoffs going back to 2005 when Deshler lost in the state championship game to UMS Wright of Mobile. The region champion has only failed to play in at least three playoff games twice since 2005.

“Any team from this region that can survive the season and make the playoffs will be pretty well battle-tested,” Davis said. “The tough competition can take you a long way in the playoffs.”