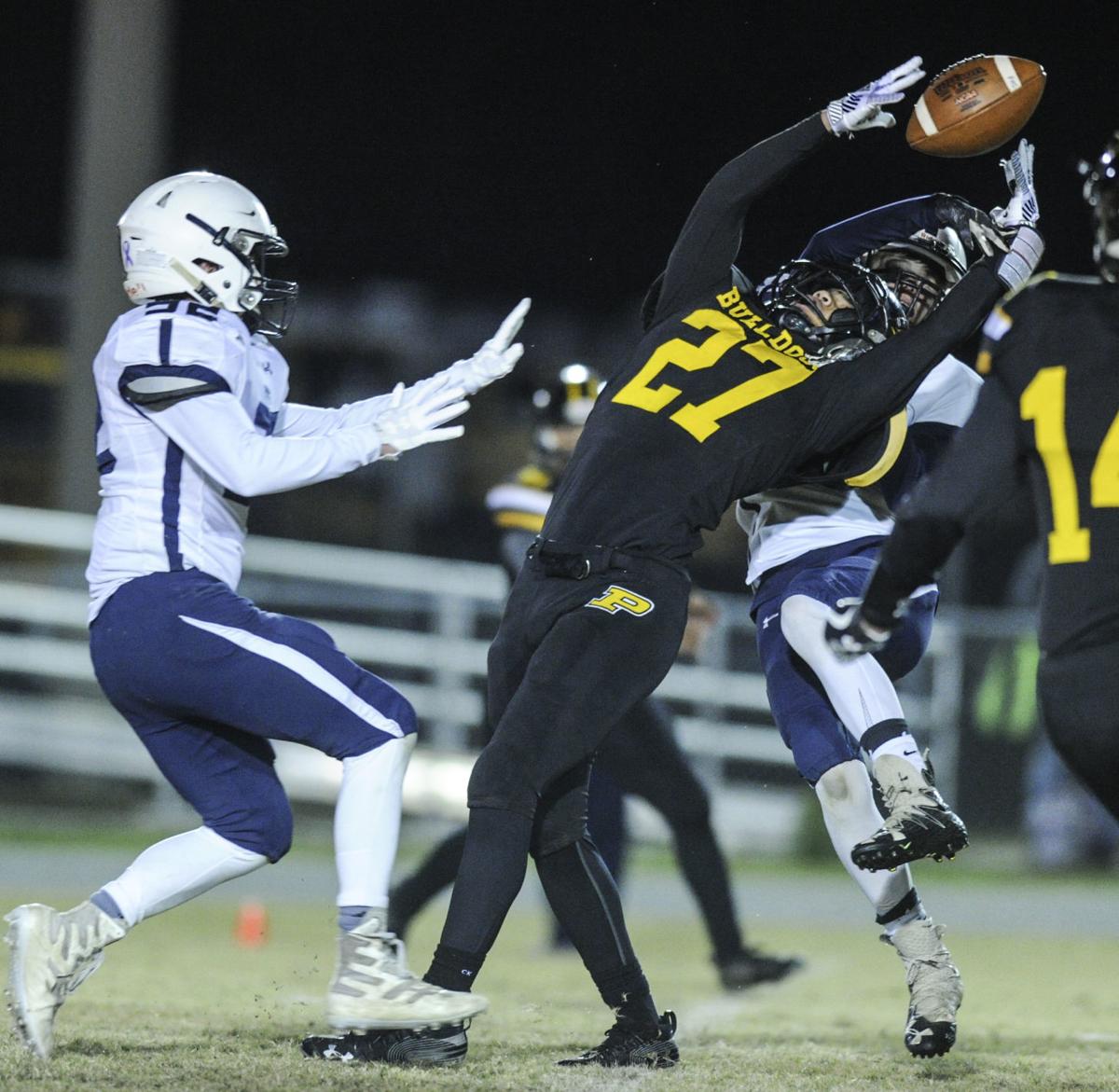 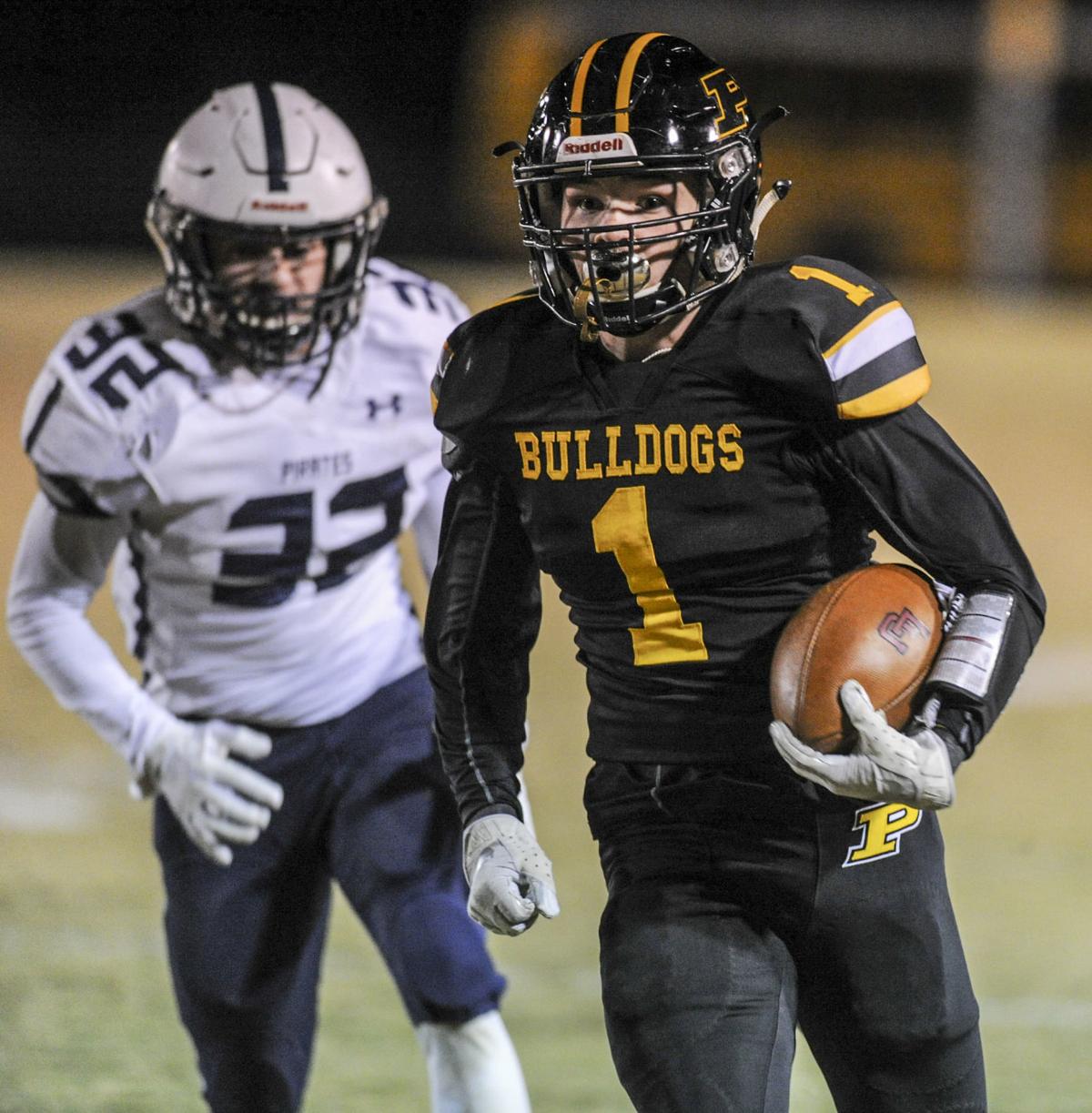 Priceville's Jaxon Cross (1) carries for a touchdown against Rogers during the game in Priceville on Friday. [JERONIMO NISA/DECATUR DAILY]

Priceville's Jaxon Cross (1) carries for a touchdown against Rogers during the game in Priceville on Friday. [JERONIMO NISA/DECATUR DAILY]

PRICEVILLE — There were plenty of tears and hugs to go around Friday night at Bulldog Stadium.

It was a night to remember for the Priceville football program. The Bulldogs got their first ever playoff win with a 44-23 whipping of Rogers.

The Bulldogs (8-3) advance to the second round of the Class 4A playoffs to play at Northside in Tuscaloosa on Friday. The Rams (10-1) beat Hokes Bluff, 35-21.

“I really can’t put into words what this means for us,” senior Jaxon Cross said. “This is really special to be on the first team from our school to ever win a playoff game.”

Cross scored three touchdowns. He had two on offense in the first half on runs of 2 and 25 yards. His 70-yard interception return for a touchdown with 2:17 left in the game sealed the victory.

This was Priceville’s third trip to the playoffs. The Bulldogs lost first-round games in 2015 and 2007. The football program started in 2002 and was not eligible for the playoffs until 2006.

“This is really a blessing to be a part of this,” senior lineman Michael McNutt said. “Most of this senior class has been together since kindergarten. To go through the last three seasons with just four wins to winning tonight is amazing.”

The Bulldogs stuck to their usual game plan of feeding the ball to junior running back Jerry Burton. He rushed for 206 yards and three touchdowns on runs of 2, 23 and 1 yard. His season totals are now at 31 touchdowns and 2,409 yards on 323 carries.

The first half was all offense, with neither team able to stop the other. Priceville had four possessions and scored three touchdowns. One drive stalled on downs at the Rogers 33 mostly because of a big loss on a fumbled exchange.

The visiting Pirates (3-8) had the ball four times, scoring three touchdowns and kicking a field goal. That was enough to give Rogers a 23-21 halftime lead.

“I told the guys at halftime that this was a physical game, and we knew it would be a physical game,” said Priceville head coach Chris Foster. “Now we were going to see which team would establish its will.”

Priceville took the opening kickoff of the second half and produced a 12-play drive that ended with a 23-yard field goal by Hector Vallejo. That gave the Bulldogs a 24-23 lead that turned out to be enough for the win. Priceville’s will kept Rogers scoreless in the second half.

Rogers’ first possession of the second half ended with a Priceville interception by William Baker at midfield. Five plays later, Burton was in the end zone for a touchdown to make it 30-23.

Rogers then fumbled the following kickoff and Priceville recovered. Four plays later, Burton was in the end zone again, and it was 37-23.

Cross’ interception return for a touchdown closed out the scoring.

“We have a great senior class that has been through a lot,” Foster said. “I’m really happy for them tonight. They deserve this.”