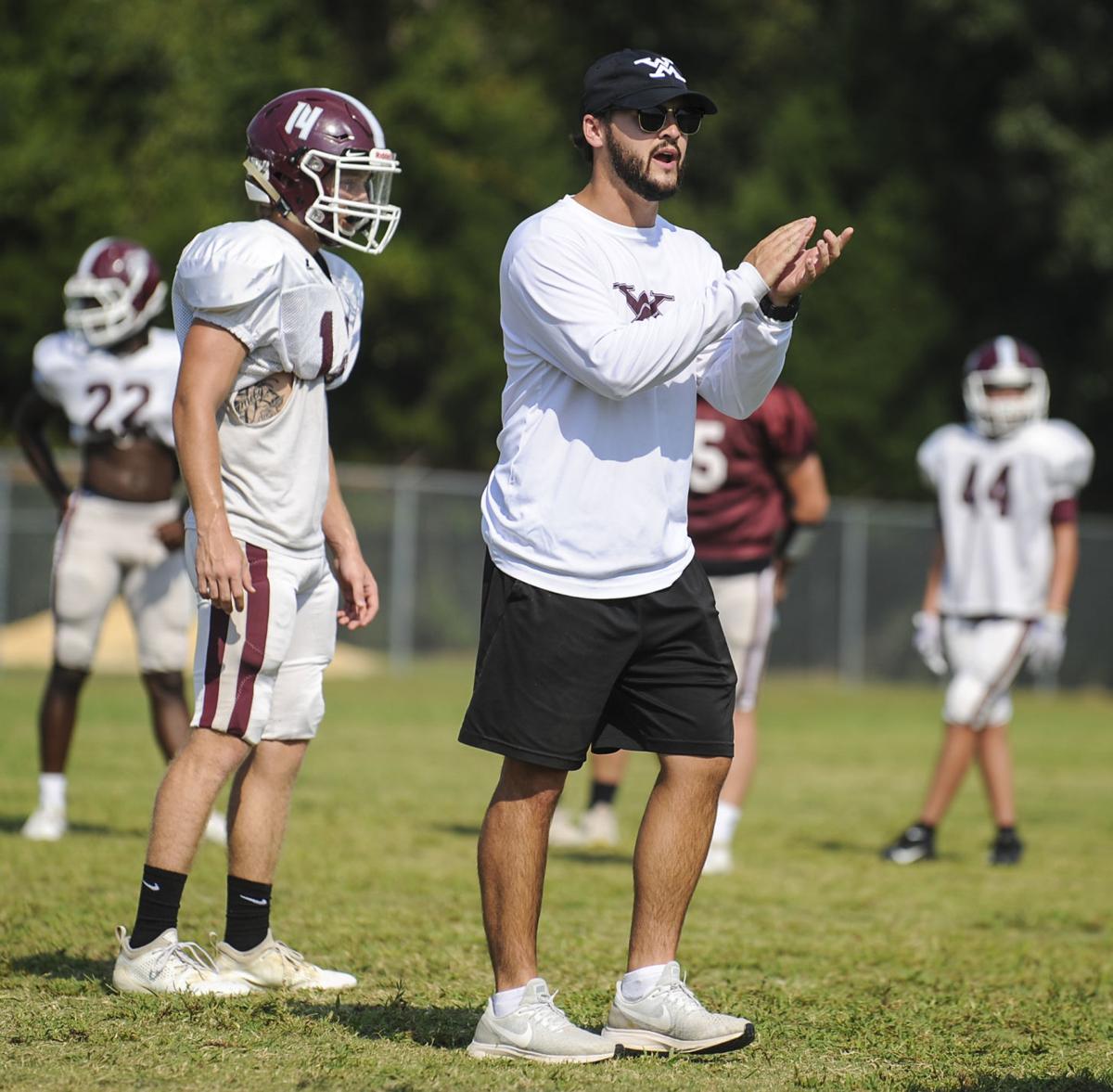 Landon Stephens is in his first season as defensive coordinator at West Morgan. [JERONIMO NISA/DECATUR DAILY] 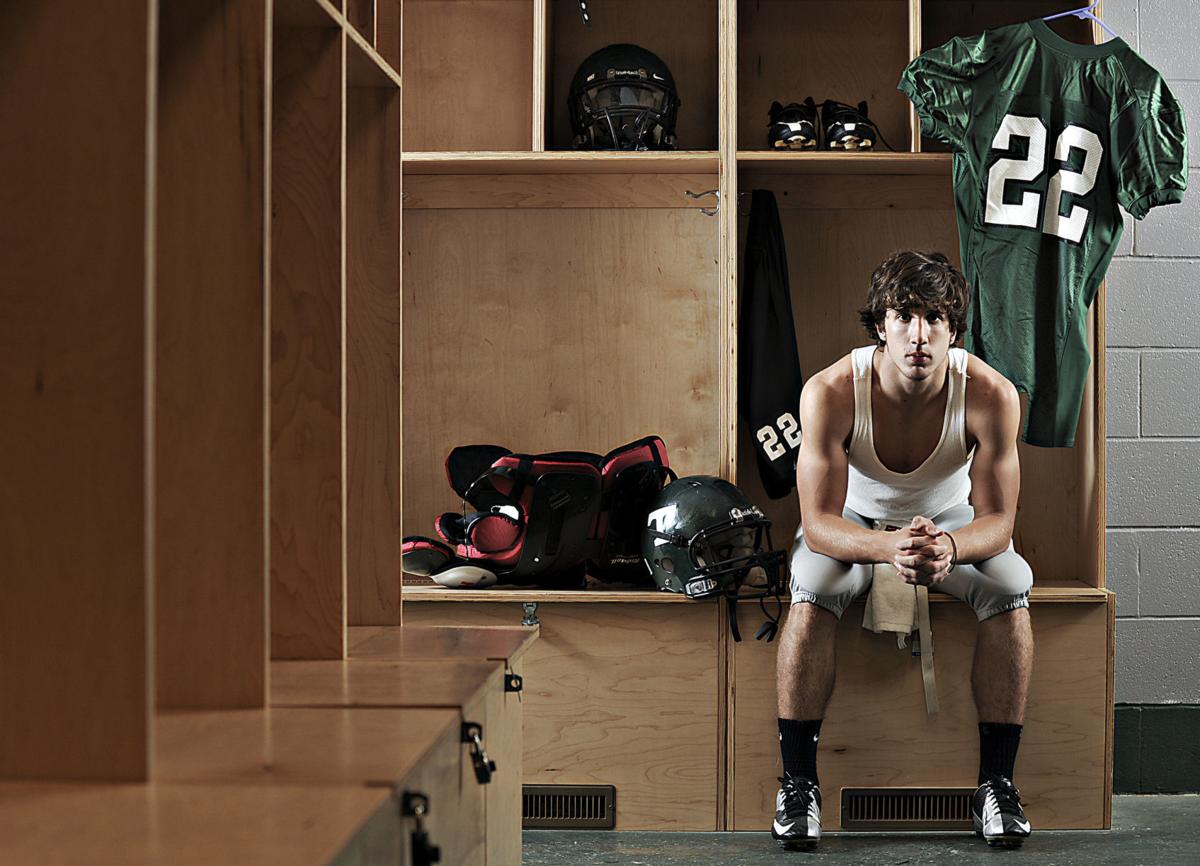 The late Hayden Stephens was the Decatur Daily’s Class 1A-4A Player of the Year in 2013. [JERONIMO NISA/DECATUR DAILY] 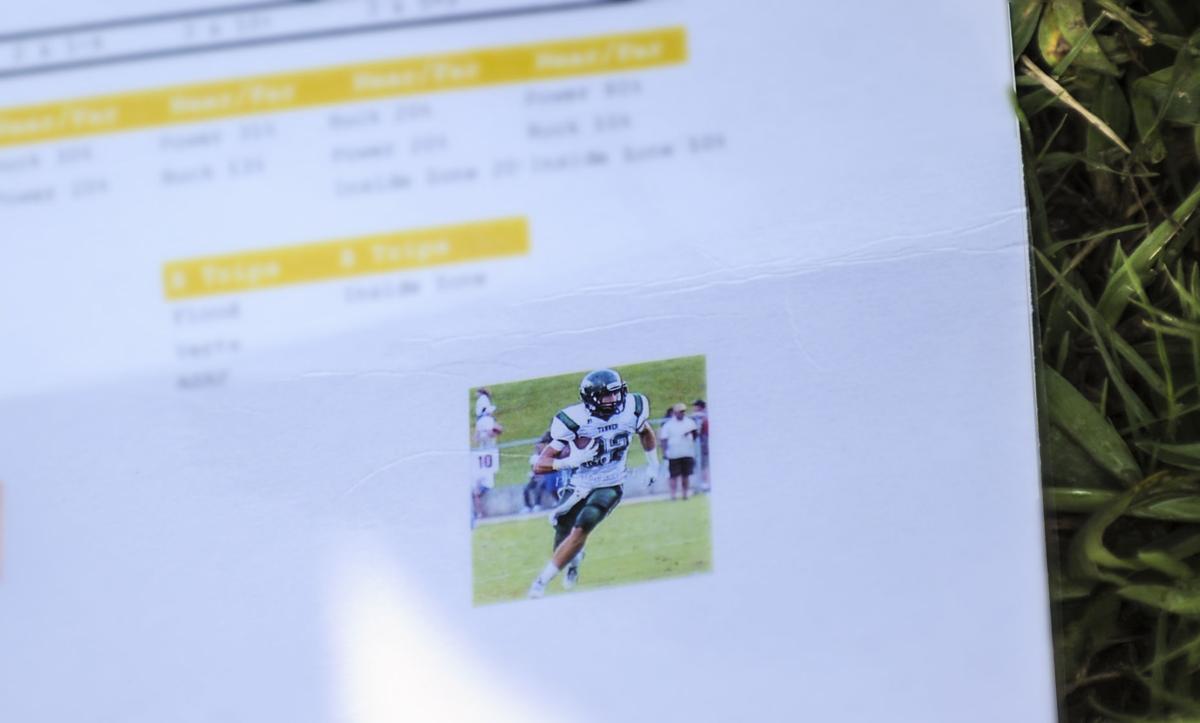 Landon Stephens is in his first season as defensive coordinator at West Morgan. [JERONIMO NISA/DECATUR DAILY]

The late Hayden Stephens was the Decatur Daily’s Class 1A-4A Player of the Year in 2013. [JERONIMO NISA/DECATUR DAILY]

West Morgan defensive coordinator Landon Stephens stares at his play sheet, and a familiar face stares back at him. He’s memorized the sheet forward and backward, but when he reaches a road block, this face helps him.

When he’s having trouble figuring out what coverage to use or how many people should rush the quarterback, Landon looks to the photo for guidance.

“I switch the pictures out every week,” Landon said. “It’s always in the bottom right corner to remember him. If I need something or want something to happen, I look down at that picture and say, ‘Come on, bro, help me out a little bit.’”

It’s been nine months since Hayden died due to complications from an enlarged heart. Since that day in December, football has been a way for Landon to take his mind off of Hayden's death.

Landon joined coach Mikel Riggs’ staff this season after coaching at John Carroll High in Birmingham last year. He wanted to move back home to be closer to family after Hayden's death. The photo of his late brother is like therapy.

"It helps me zone out and focus on the love of the sport, and I don’t think about the bad things as much,” Landon said.

Hayden and Landon shared success together on the football field at Tanner High.

They were only two years apart. Landon always loved football. He took after his dad, Johnny, who was a star player for Elkmont in the 1970s and later became head coach at West Limestone in the early 2000s.

Landon wanted to learn everything about the sport. He studied it inside and out. He was an all-state quarterback his senior year and The Decatur Daily’s 1A-4A Player of the Year in 2011.

Hayden was a little different. He played football because it was something to do. Not only did his brother play, but his cousins, Blake and Zach Whitt, played football, too. They all grew up in the same neighborhood.

“I think Hayden played because everybody else played,” said Tanner basketball coach Chris Whitt, who is Landon and Hayden’s uncle. “He was a happy-go-lucky sort of guy. Football just kind of came to him."

Hayden played running back alongside Landon. They powered Tanner’s offense in 2011 — Landon’s senior year. Blake and Zach played receiver. The family was the center of Tanner football.

“Hayden got so excited for me when I scored,” Landon said. “He knew how much it meant.”

Landon graduated and went to UNA to play football for a year. He traveled back to Tanner to watch Hayden play whenever he could.

The state title loss seemed to light a fire under his brother. Hayden rushed for more than 2,000 yards his junior year. Tanner won its first state title that season with a 28-14 win over Washington County at Jordan-Hare Stadium in Auburn.

The next year, Landon moved on to play baseball at Shelton State in Tuscaloosa. Hayden closed out his career at Tanner with another season with over 2,000 yards rushing. Tanner made it back-to-back state championships with a 21-13 win over Washington County at Bryant-Denny Stadium in Tuscaloosa.

Landon got to watch his brother win another state title while also winning Most Valuable Player honors after rushing for 164 yards and two touchdowns on 23 carries.

“I had some success playing sports, but the most excited I’ve ever been was when he got MVP,” Landon said. “I wasn’t even part of that team. He wanted that MVP, and he got it.”

Hayden, who was also The Daily’s 1A-4A Player of the Year in 2013, signed a scholarship to play football at Shorter University in Georgia, but the distance was tough for him. He enjoyed being around his family more than anything. Landon said Hayden was a “momma’s boy.” So, he moved back home.

There he could also focus on his real passion — the guitar. His grandfather was a skilled guitar player. Hayden decided to pick it up when he was around 15 or 16 years old to be like his grandfather. Just like football, he was naturally talented.

Landon remembered a time on vacation at the beach where a group saw Hayden playing guitar and approached him. They asked him if he knew how to play a song — Landon guessed that it was “The Ballad of Curtis Loew” by Lynyrd Skynyrd.

Hayden didn’t know the song but asked the group to play a recording of it. They did, and Hayden almost immediately played it back to them on his guitar after hearing it just that one time.

“I mean, he could really play,” Landon said. “I couldn’t tell you how many times I laid in bed, trying to go to sleep and couldn’t because he was playing guitar all night. He would stay up all night playing.”

Hayden eventually decided to try to make guitar his career. He played shows around the Southeast and even opened up for country music star Billy Ray Cyrus in Bremen, Georgia, while playing guitar in country singer Ashley Walls’ band.

According to Landon, Hayden was a person with tangible evidence that he was talented. He rushed for over 4,000 career yards in football. He played guitar for a rising country star. He even won the guitar picking category of the Tennessee Valley Old Time Fiddlers Convention last October. None of that went to his head.

Hayden was always a favorite among his football team, his family and his group of friends. He didn’t boast and would keep his accomplishments close to the chest. He would choose to hangout with his sister Whitney’s 5-year-old son, Jordan, instead of doing other 23-year-old activities.

That’s what made the death so hard on his family. Hayden had always been the one to have a positive impact on someone when he could, especially if it was one of his siblings, cousins or nieces and nephews.

“He was just such a positive person,” Whitt said. “He just brightened up a room. It’s just one of those things that you’ll never be able to replace. Not seeing him anymore, it’s just really hard.”

It was hard on Landon, too. Until recently, he had a difficult time opening up about Hayden’s death. Football has helped him cope with that.

He’s even told his players about how good his brother was at the sport. It’s also helped the family rally around each other. Landon’s parents, sisters, nieces and nephews show up at West Morgan games to support Landon’s new team.

It’s the same group that used to show up to cheer on Landon and Hayden when they played together at Tanner.

“Family is all we’ve ever known,” Landon said. “Losing Hayden really hurts. Being together is what helps us. I don’t think we could get past this without each other.”